Grazed to death
Public lands are sick, according to new research 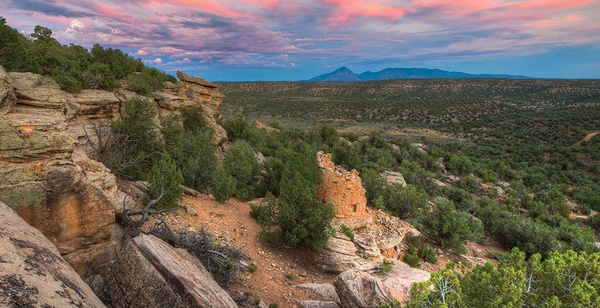 The Escalante Pueblo in Canyon of the Ancients./ Courtesy of BLM

Last week, Public Employees for Environmental Responsibility delivered the results of its deep dive into data on the health of America’s public lands. The diagnosis: The patient is in ill health, due in large part to too much beef – i.e. livestock grazing – on drought-stricken rangeland.

PEER drew on 22 years of Bureau of Land Management data for some 21,000 allotments across 155 million acres. Here at the Land Desk, we’re going to zoom in on the Four Corners Country.

According to the research, a good chunk of Grand Staircase-Escalante National Monument gets a failing-health diagnosis and nearly all of Canyon of the Ancients National Monument is sick, with cattle grazing as the number one cause. (The research only uses BLM data and doesn’t include Forest Service grazing allotments).

Most national monuments forbid grazing. But the proclamations establishing Grand Staircase-Escalante, Canyon of the Ancients and Bears Ears national monuments allowed it to continue as before. While one might hope that national monument status would induce the BLM to manage grazing in a way that ensures the health of the land and antiquities, that is often not the case.

The problem is especially pronounced in Canyon of the Ancients, as the PEER research makes clear. President Bill Clinton established the monument in 2000 to up protections on 164,000 acres (it has since grown to 174,000 acres) of public land containing the highest known density of archaeological sites in the nation. The area had been heavily grazed historically, and the dominant Montezuma County culture and Sagebrush Rebel ideology was centered around ranching, so stopping grazing altogether would have been politically unpalatable, to say the least. So the proclamation, like those for Bears Ears NM and GSENM, allowed grazing to continue according to regular BLM policies.

In 2005, a rancher gave up the large Flodine Park and Yellow Jacket allotments, north and south of McElmo Canyon, respectively, and sold 4,500 acres of adjacent private land to the BLM to add to the national monument. Both allotments and the private land contain a number of intermittent streams, shallow canyons and numerous cultural sites. They had been grazed relentlessly for decades prior, and showed the wear and tear – much of the cryptobiotic soil had long before been trampled and destroyed and invasive cheatgrass had infiltrated the grazed areas. An archaeological assessment conducted later found grazing had damaged dozens of sensitive and cultural sites in the areas.

In 2010, the BLM, which manages the monument, issued a new resource management plan, which allowed for continued grazing, but also opened the door to permanently retiring vacant grazing allotments if they fail to meet BLM rangeland health standards or when grazing is negatively impacting cultural sites. Five of the 28 allotments in the most heavily visited areas – including Sand Canyon – were cancelled, but not the Flodine and Yellow Jacket allotments, which were still in retirement at the time.

Instead, the local county commissioners and a group of ranchers pressured the BLM to reauthorize grazing on both allotments – to bring them out of retirement, if you will. The BLM acquiesced, but environmentalists and tribes with roots in the area fought back, forcing the agency to do a more thorough environmental analysis of the proposal.

Meanwhile, a team of scientists came in and assessed the healing process on the Flodine Park and Yellow Jacket allotments, which by then had been cow-free for 11 years. They compared biocrusts on those allotments to a fenced enclosure that hadn’t seen grazing for 53 years and a plot that was being actively grazed. What they found was both predictable and remarkable: The longer a plot went without cows, the healthier it was.

The Yellow Jacket and Flodine Park allotments remain in limbo. Now BLM is hoping to enlarge the monument further by purchasing two privately owned inholdings, totaling 647 acres, in the Yellow Jacket Canyon drainage. Environmental groups and tribes support the acquisition. But they are not so keen on the plan to wrap land into the Yellow Jacket Canyon allotment (which is different than the aforementioned Yellow Jacket allotment). The sentiment is best summed up by Stewart B. Koyiyumptewa, of the Hopi Cultural Preservation Office, in a letter to the BLM:

“We do not support permitting livestock grazing back in these areas and we support permanent retirement to best protect the lands, waters, plants and animals, and cultural resources within Canyon of the Ancients National Monument.”

We have reiterated that livestock grazing is not a permitted use in most National Parks and Monuments because of its known impacts on natural and cultural resources, and it is currently resulting in use and preservation conflicts.”

As it stands, more than 150,000 acres in the national monument are open for grazing, and the entire area is gripped by severe to extreme drought.

The Land Desk is a newsletter from Jonathan P. Thompson, longtime journalist and author of River of Lost Souls, Behind the Slickrock Curtain, and the newly released Sagebrush Empire. To subscribe, go to: www.landdesk.org.