Growing pains
Durango is blowing up, but does it have the water to sustain itself? 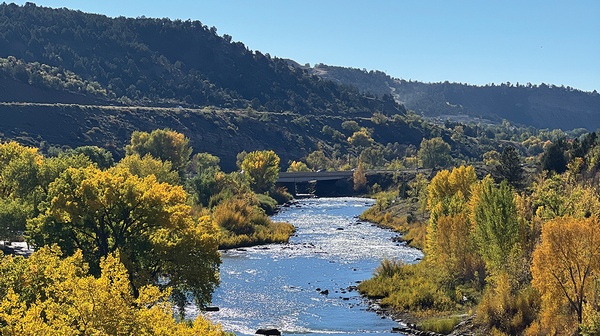 The Animas River is the City of Durango's back up water plan when flows from its main source, the Florida River, aren't sufficient. However, as we all know, the Animas is not 100% reliable, subject to low flows and mine blow outs./ Photo by Missy Votel

An unprecedented amount of people are moving to Durango and La Plata County, but with the increasing effects of drought across the region, is there enough water to support them all?

For years, population growth and new development were already on the rise in Southwest Colorado, but the effects of the pandemic accelerated that buildup as more people left urban areas and sought out desirable mountain towns.

In just the past few weeks, a number of large-scale development projects have been proposed: 800 units south of town on the Isgar property near La Posta Road; another 500 apartments in Three Springs; and nearly 80 apartments and townhomes near the old Mercury Building. And that’s not to mention the onslaught of scattered development around town and in the county.

All this raises a fair question: does the region, which has experienced a 23-year drought believed to be the worst since 800 AD, have enough water to sustain it all?

“The Pagosa Springs-Bayfield-Durango corridor is rapidly growing while experiencing areas of localized water shortages,” according to a report from the Colorado Water Conservation Board.

Like any question that involves the weather, the answer is subject to a lot of uncertainty and unpredictability. But the subject is on the mind of state and local planning departments and water officials.

One thing that’s for sure, the Durango migration can’t be turned off like a faucet.

“You can’t stop people from moving here; that’s not an option,” Kevin Reidy, Colorado Water Conservation Board’s water conservation specialist, said. “So we have to figure out the most water-efficient way to build new communities and start thinking about what rabbits we can pull out of a hat to make this work better.”

The City of Durango receives the majority of its water supply from the Florida River, a relatively pristine yet small river that spills out of the Weminuche Wilderness and into Lemon Reservoir. Eventually, the water is released downstream and ends up in a small city-owned reservoir called Terminal Reservoir.

When demand exceeds supply in the Florida River, the City of Durango pumps water out of the Animas River. The Animas typically has more water but is vulnerable to outside factors that impact water quality, like contamination from inactive mines around Silverton.

Historically, these two reliable water sources have served Durango well, a rarity in the West. But that all could be upended with the effects of climate change and long-term drought, also known as “aridification.” Though Southwest Colorado still sees up and down years with precipitation, the long-term trend – without question – is less available water year over year.

“There is a significant downward trend in precipitation,” Allison Baker, the city’s public works director, said in August. “(Looking around the West, we know) streams can run dry. We don’t want to become complacent.”

Indeed, the City of Durango has all the water rights it needs – in theory – in both the Animas and Florida. But contracts do no good when there’s no water in the river. A telling stat: Prior to 2010, the Animas flowed under 100 cubic feet per second just two times (in the 1910s), based on 100 years of records. In the past five years, however, the Animas has experienced more than 30 days with flows below 100 cfs.

The water supply in Durango/La Plata County is diminishing at a time of rapid influx of people to the region, though exact numbers are difficult to pin down. The U.S. Census Bureau has the county’s population at 56,250 as of July 2021, up just 612 people from a count in April 2020. However, this is probably an underestimation given the issues with the 2020 census (another story, another time). What’s more, state projections show the county could be home to nearly 80,000 residents by 2050.

Another indicator can be found in City water consumption records, which show 1.324 billion gallons were used in 2019, compared to 1.364 billion gallons in 2021. And with no way to stop the mad dash to Southwest Colorado, planning managers must do what they do best – plan. The City of Durango and La Plata County staff were unavailable for interviews this week and last week after multiple requests seeking comment.

In an emailed statement, however, public works’ Baker said the city has enough water to accommodate the growth with the Animas and Florida, with a card up its sleeve being Lake Nighthorse. “We are confident that Durango has a very secure water plan for proposed growth,” she wrote.

Wolff agreed. In an interview with The Durango Telegraph, Wolff said it’s understood the region is drying out, but with the available water in the Animas and Florida as well as storage space in Lake Nighthorse, it looks “fairly positive” going into the future.

“But, of course, if the climate gets worse, you could see more impacts,” he said.

The City of Durango’s current problem is actually accessing its water rights stored in Lake Nighthorse, which is downstream of Terminal Reservoir and would require an estimated $20 million pipeline to pump water down from the lake and up to the city’s reservoir. City councilors recently approved $500,000 to study plans for the pipeline.

As it stands, Terminal Reservoir has only 267-acre-feet of water storage, enough for about 10 days at peak season and 30 days during the slow season. Having access to Lake Nighthorse would add about 350 days of storage based on winter water-use numbers and about 30-45 days during the summer, according to the city. On top of that, Lake Nighthorse water would allow for redundancy should any outside factors – like wildfires, mine blowouts or drought – further impact the system.

“We can mitigate our risk through that storage, but if we can’t access it, then it’s really not providing us the protection we’d like over time,” Baker said.

Lake Nighthorse, part of the whittled-down Animas-La Plata Project, was built primarily to fulfill water rights treaties with three tribes: the Navajo Nation, Southern Ute and Ute Mountain Ute. The City of Durango, though, bought about 3,800 acre-feet of water rights. Multiple requests for comment to the three tribes were not returned. Russ Howard, manager of A-LP Operations and Maintenance Association, which manages Lake Nighthorse, said the tribes support the pipeline.

“Everyone bought into this project wanting to put this water to beneficial use,” Howard said. “I don’t see any issue at all.”

Throughout Colorado and the drought-stricken West, a reckoning with water is happening. In 2020, Dove Creek in Montezuma County almost ran out of municipal water. Just this week, The Washington Post reported a town in California’s San Joaquin Valley will run out of water in two months.

CWCB’s Reidy said that about 15 years ago, mentioning water and growth in the same sentence was a dicey subject. But as these inextricably tied issues come to a head, that’s changed. “Since then, we’ve made a lot of headway on that topic,” Reidy said. “It’s one thing everyone is grappling with at this point.”

Indeed, the Colorado Water Plan addressed the nexus of land use and water, with a number of grants and programs to help communities be more water-conscious.

A shining example, Reidy said, is a Front Range development called Sterling Ranch, which has embraced innovative approaches to water use, including rainwater harvesting, better building designs and low water-use landscaping. The average home there uses about .2 acre feet of water a year (the average house uses .5 acre feet).

“We need to really transform our communities into something that can survive,” Reidy said. “It’s hard to predict 10, 20 years out, but we know we’re going to have less water, for sure. So how do you withstand shocks like that and more holistically plan your future?”

Because city and county staff were not available for interviews, it’s hard to get into specific strategies here at the local level. Whereas other major cities such as Santa Fe and Las Vegas have taken drastic measures to conserve water, Durango has not historically implemented water restrictions on homeowners. Instead, the city has opted to work with the 10 biggest water users, including Hillcrest Golf Course, Durango School District 9-R and Fort Lewis College.

Not on our doorstep – yet

To add yet another layer, Durango is in the midst of a housing crisis and needs more places for people to live (well, specifically, affordable/workforce housing, which only constitutes a small portion of new development). And, it should be noted, water use in individual homes pales in comparison to other sectors.

In Colorado, for instance, agriculture uses nearly 90% of the water that’s consumed in the state, according to a report from Colorado State University. Municipal and industry use, on the other hand, accounts for about 7%.

“Home water use is smaller than industrial and agriculture use, and (home water use) goes back into the system,” Wolff said. “So I think every sector needs to be more mindful of water use; that’s going to be critical going into the future.”

As we all should be aware by now, the entire Colorado River system is facing critical water shortages. Rob Genualdi, Colorado Division of Water Resources Division 7 engineer, which covers Durango, said that while Durango/La Plata County has sufficient supply at present, shortages throughout the region are a cause for concern.

“That’s our vulnerability – whether surrounding states and communities with water shortages somehow trickle our way,” he said. “When and if that might happen is still really unknown at this time. It’s not on our doorstep right now, but you never know what the future might hold.”

CWCB’s Reidy agreed. And he said the only thing we can do is start planning now.

“Communities do run into that – ‘We’re alright until we’re not,’” he said. “But there’s going to be a point where you’ll fall short. That’s why we need to get everyone more proactive with water and land-use planning.”