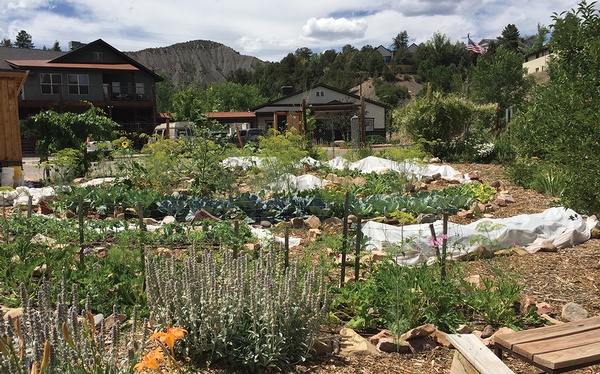 The Manna garden in full bloom. After a 15-year relationship, The Garden Project of Southwest Colorado and Manna have merged. Although merger plans pre-dated the pandemic, the current state of affairs solidified the benefits of combining the two nonprofits' forces. Manna will absorb most of The Garden Project's programs and staff with an added emphasis on expanded community education related to food insecurity./Photo by Kyler Grandkoski, Manna Garden and Food Security Manager

Some things just grow better together, like beans and corn or carrots and tomatoes. So perhaps it’s not surprising that two Durango nonprofits dedicated to growing and giving food to people, The Garden Project of Southwest Colorado and Manna, have become one. Like two peas in a pod.

The merger, which became official June 25, did not completely come from the left cornfield. The two organizations have a 15-year history of working together, through such projects as Manna’s community garden and free market as well as its new greenhouse. The two even share volunteers and grant funding. However, a changing funding landscape and dwindling resources for nonprofits caused the two organizations to finally make the relationship official.

“We just felt like we could do more collectively for the community by collaborating resources,” Nora Stafford, a board member of both The Garden Project and Manna, said this week. “We have similar missions, which is to get at the root of why people are in this cycle of food insecurity. It just seemed like a natural thing.”

As per the merger, The Garden Project was officially dissolved. The school gardens the organization helped start at Miller and Needham will continue to be operated in conjunction with Darrin Parmenter of the CSU Extension Office, and School District 9-R. The Ohana Kuleana garden, which was also operated under The Garden Project’s umbrella, recently secured its own fiscal sponsor.

Manna will absorb The Garden Project’s staff, volunteers and programs and expand on the educational component. This includes a re-envisioned school program, which addresses food security through the lens of gardening, nutrition and community, as well as expanded classes and opportunities for Manna clients and the public.

“After many years of partnering with the Garden Project, I feel this is the perfect merger, especially during these unprecedented times,” Ann Morse, Manna’s Executive Director said. “It was the direction both organizations were going in.”

Although not a direct result of the pandemic – merger talks began in January – the timing was fortuitous for both organizations.

“Although this merger was planned prior to the pandemic, the realities of the current global and local situation have brought the reasons for our union into clearer focus,” said Morse. “By providing food in times of need ... we are building a healthier and more resilient community.”

Manna is one of only a handful of soup kitchens in the United States that has an onsite garden, which was started with the help of The Garden Project as well as the City of Durango. Food harvested from the nearly half-acre garden feeds Manna’s clients and supplies produce for Manna’s culinary program, which offers job skills to clients. Roughly 2,400 pounds of produce were harvested in 2018, contributing to nearly 25,000 meals from June to October of that year. With the addition of the greenhouse this year, Manna hopes to provide even more produce by extending its growing season to eight months.

“We have amazing tomatoes in there ... it’s been a huge addition,” Morse said.

The Garden Project was founded in 1998 by Shari Fitzgerald with the original focus of serving at-risk youth through horticultural therapy. Since then, The Garden Project has helped build 22 community and school gardens, worked with the CSU Extension 4-H program to implement a Junior Master Gardener Program, and hosted the annual “One Garden at a Time” farm-to-table event.

Stafford, a retired teacher from Needham who has been involved with The Garden Project for 10 years, said its demise is bittersweet. “We had a mission of growing one garden at a time,” she said. “We met that mission, so maybe it was time to merge. We’ll be stronger with more people to carry on the new mission.”

Fitzgerald, who started The Garden Project as a school project while a student at Fort Lewis College, gave the union her blessing. “My dream for The Garden Project was that it would happen without me, that one day I would wake up4  and hear something great about it,” she said.

Sandhya Tillotson, who served as executive director of The Garden Project for several years, also applauded the move. “I am proud of how much we’ve accomplished together,” she said. “I’m thrilled to see this merger, to continue The Garden Project’s mission of growing a healthier community – in a way that is relevant to the times and increases our focus on food security.”

Members of The Garden Project’s Board of Directors have joined Manna’s Garden Committee to provide continuity in programs, leadership and fundraising. Garden Project staff and AmeriCorps members have also been transferred to Manna to help support its programs as well as the school garden programs – something near and dear to Stafford.

“My passion is to continue this horticultural education for kids,” she said. “In my involvement over the years, I’ve seen the value of an education in a green space vs. screen time.”

But, even more so than feeding minds, it’s also about feeing mouths. And hunger in the community only increasing – Manna has doubled the number of meals it provides since the pandemic started – growing efforts can only help.

“We’ve been partnering with The Garden Project for 15 years, and every year it’s just gotten stronger,” said Morse. “This is the perfect time for Manna to add programs through Growing Partners and grow into one really strong organization.”

Manna and The Garden Project received a $15,000 grant from the Moniker Foundation, a Colorado-based private philanthropic organization established by the family of local resident Frank Sinton. Moniker has pledged an additional $5,000, contingent on $10,000 in matching community funds. If you’d like to contribute, go to www.mannasoupkitchen.org/donate with a designation to garden programming. n 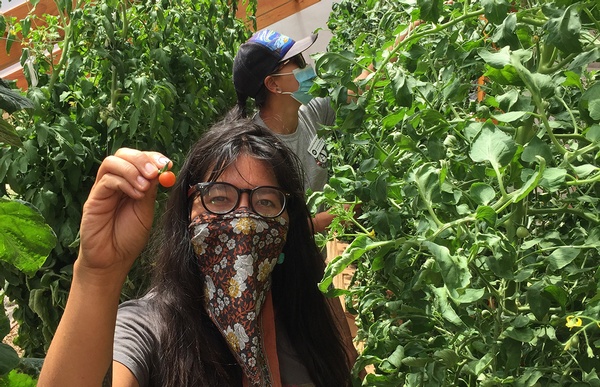 Manna's Program Services Manager Marissa Hunt displays a cherry tomato from Manna's new greenhouse, which was built in conjunction with The Garden Project. Rural Alliance for Dignity Americorps Member Sarah Marcus works in the background. Three Americorps members who previously worked for The Garden Project will now work at Manna under the merger./Photo by Kyler Grandkoski

Since the coronavirus pandemic started, families across the country have been struggling to put food on the table – and Durango is no different.

Meals at Manna can take many forms, from grab-n-go lunches to take-home backpacks for local school children to bulk meals for other nonprofit groups.

“We have an open-door policy, if you need help, we’re here for you,” said Morse.

The nonprofit also offers 50 families in need low-cost shares in a CSA, which is comprised of produce from Manna’s garden, as well as food from the Good Food Collective and local farmers. Morse said the benefits are twofold: helping put food on local tables while also helping to support local farmers.

“We’re trying to give families a really good deal while giving money back to farmers,” Morse said.

Although the pandemic has put a strain on everyone, she said one upside is that it has solidified Manna’s relationship with partnering organizations, from the Durango Food Bank to Compañeros.

“It’s made a strong bond; Manna can do what Manna does best,” she said.

Manna’s dining room remains closed to both clients and volunteers at this time, but grab-and-go meals can be picked up seven days a week from 9 - 11 a.m. For more info, go to www.mannasoupkitchen.org