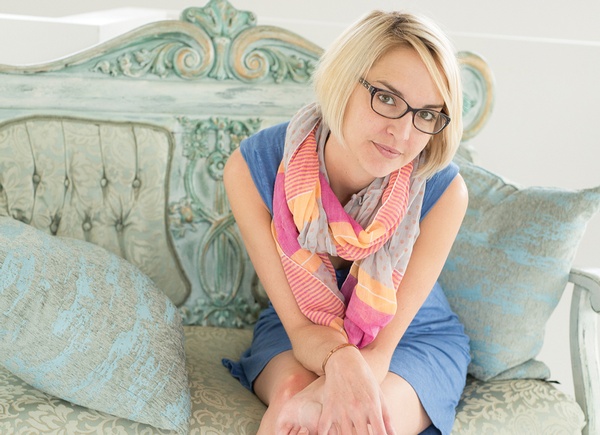 After experiencing several years of health-related trauma, Gloria Kaasch-Buerger got her certification in sexology to coach others over their trauma as well./ Courtesy photo

In the words of the great Salt-N-Pepa, let’s talk about sex (baby.) There, we said it.

Now that we have your attention, rest assured it won’t be us doing the talking. Rather, we’re going to a real, live sex expert – otherwise known as a sexologist. Think of her as our very own Dr. Ruth, but taller and with way better hair.

If you are thinking to yourself, “Sexology? Bah humbug – that isn’t a thing,” well, you’d be wrong (and missing out on all the fun.)

At least according to Gloria Kaasch-Buerger, a longtime local and Fort Lewis College graduate. Kaasch-Buerger, 35, recently completed her six-month sexologist coaching certification (in four months, we might add) from the Dr. Rachael Institute and subsequently launched her local sexual coaching practice, Intimacy for Everyone. In addition to one-on-one sessions, Kaasch-Buerger offers workshops, special ladies nights and couples sessions. (*Sorry guys. Although Kaasch-Buerger loves you, her primary area of expertise right now is the ladies.)

“I want to help women open up about what we’re not supposed to talk about,” said Kaasch-Buerger. “It’s not just about intercourse but rediscovering our bodies.”

For Kaasch-Buerger, that rediscovery was a long, painful  journey – one she is still on to this day. About 10 years ago, the young mountain-bike guide, ski instructor and newlywed was beset with excruciating pain in her pelvis. She was found to have an ovarian cyst, which was removed. However, when she went back to riding her bike and resuming regular activity, the pain persisted. A few months later, it was discovered there was another cyst on her other ovary.

“And that’s when it got complicated,” she recalled. The pain continued, accompanied by other symptoms. Doctors were stumped, and what ensued was a not-so- merry-go-round of 11 pelvic surgeries (including a hysterectomy) as well as trips to dozens of doctors and specialists throughout the country.

Despite all this – and crushing medical bills – there was still no diagnosis for her symptoms and the pain only grew worse. According to Kaasch-Buerger, the pain became a negative feedback loop, where the longer it went on, the more chronic it became. Over the years, it began consuming her life, forcing her to quit the activities she loved, straining her marriage and affecting a new job she had landed with the City Manager’s Office.

“The whole time I was down, I just wanted to get back to my old life, I had just gotten my master’s degree in public policy,” she recalled. “But you kind of don’t have a choice in life.”

Then, as if things couldn’t get any worse, in 2015, Kaasch-Burger nearly died due to complications from her previous surgeries. She spent seven days in a hospital, and despite an effort to fix the problems, ended up bedridden and on disability – and still in pain.

“I had no hope. I started staying in bed, there was a hospital bed in our downstairs,” she said. “I watched every single episode of ‘Star Trek.’”

She was on 19 different prescribed medications and was so afraid that anything she ate would cause more pain, that she pretty much gave up eating. Her life became a revolving door of E.R. trips – as many as 15 in one month.

It was during one of these trips that a local doctor  spotted the tell-tale symptoms of interstitial cystitis, aka “painful bladder disorder.” Believed to be an autoimmune disease, it causes inflammation of the lining of the bladder and affects mostly women. The doctor’s intuition turned out to be right. “It was nice to finally have a diagnosis,” Kaasch-Buerger said.

She found a neurologist in Denver who specialized in IC who was willing to perform a somewhat experimental surgery on her. It entailed implanting a pace-maker to interrupt the pain signal between her bladder and spinal cord. Gradually, the $215,000 procedure began to relieve some of her pain. And while she felt better physically, the numerous surgeries and complications – including an infection that required another surgery – took its toll.

“I started feeling a little better, but didn’t realize how much PTSD I had,” she said.

Not only was she living in constant fear of pain, she also winced at the thought of intimacy – something most of her doctors failed to address.

“During that whole time only two doctors ever asked me about sex. I needed someone to ask me, ‘How do we help?’” she recalled. “I felt ashamed. I thought I wasn’t supposed to talk about it.”

In addition, her disability insurance cut her off after the pace-maker surgery, forcing she and husband, Brian, to deal with the crippling medical costs on their own.

“That’s when I knew I had to change everything,” Kaasch-Buerger said.

She began seeing a pain coach in California via Skype, as well as local therapists and pelvic floor specialists to help her manage her condition. “We have a great group of women here,” she said.

It was with their help that she learned to listen to her body’s signals to better manage the pain.

Eventually, Kaasch-Buerger started a Facebook group dedicated to pelvic pain and intimacy issues called Hurts So Good, and before long, she had 600 members. At last, she found a calling and a way to turn her pain into something positive.

“I realized I was really passionate about it,” she said.

It was one of Kaasch-Buerger’s local therapists who encouraged her to pursue sexology professionally and share her knowledge in the hopes of helping others.

Using a combination of techniques learned from her pain coach, local therapists and sexology course, Kaasch-Buerger’s goal is to help other women get over their pain and fear by using the power of their bodies.

“Pleasure is the antidote to pain, why not use it?” she said.

She noted her role is only as a coach and not a therapist – that is left to the professionals. “My goal is not to re-traumatize but to move forward,” she said. “I am a sexual life empowerment coach. I help build them back up using their sexuality.”

She said the key is for women to trust their intuition and listen to their bodies – something she wished she had begun doing much earlier in her illness. “A lot of women go through changes with their bodies and they’re not prepared. We just rely on what we did before.”

Kaasch-Buerger held her first event in March – which included, among other things, making clay replicas of certain lady parts (the same one from the infamous “Seinfeld” episode). It was followed by another special Mother’s Day workshop, which also attracted a capacity crowd. Buoyed by the success, more sexual empowerment workshops are planned this summer, in addition to her private coaching. Her goal is to eventually create a sexual empowerment group with regular “mingle” events, with fun activities to break the ice and get women talking, and healing.

“That feeling of being alone is really hard,” she said. “It’s nice to know someone else has been through it.” 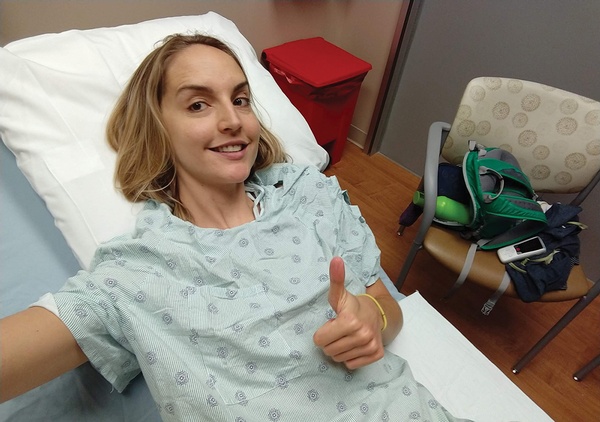 Kaasch-Buerger gives the thumbs up after one of her 11 surgeries. She was finally diagnosed with interstitial cystitis, an inflammation of the bladder. She has learned to live with the pain and is now offering coaching to other women going through similar situations./Courtesy photo

• Gloria Kaasch-Buerger will be hosting a Sexual Empowerment Summer series from 5:30 – 7 p.m. Thursday nights June 27, July 11 & 25; and Aug. 8 & 22. For details, class descriptions or to register, go to www.intimacyforeveryone.com.
• Believe it or not, there is more than one sexologist in town. Erin Brandt, who has a master’s degree in forensic sexology, is the owner, coach and facilitator for Birds and Bees. In addition to offering positive sex education and coaching, Brandt co-hosted KDUR’s “Sex in Your Ear.” To find out more about her offerings, visit www.positivesexed.com