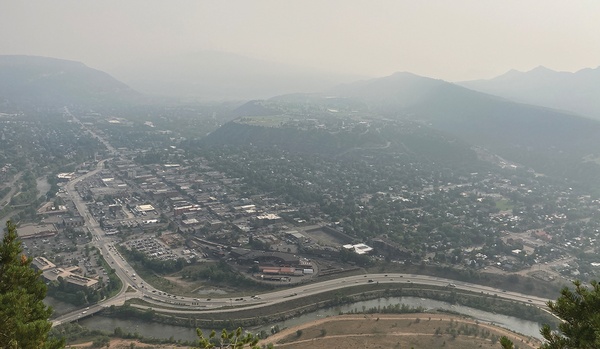 Smoke fills the skies above Durango recently as wildfires rage across the West./ Photo by Missy Votel

Every time I take the flight between Denver and Durango, I try to get a window seat with views unimpeded by the wing. And from the moment the plane tilts up and that distinctive feeling of the wheels leaving the earth causes my stomach to sink, my forehead is pressed to the hard plastic of the window and my gaze affixed to the topography below. I never read or converse with my neighbor or sleep, regardless of how tired I might be or how many hours I may have spent in airplanes, airports, and security and passport lines already. If I did, I might miss something, I might overlook some tiny detail – a distinctively shaped patch of snow on the north face of a rocky peak, the silvery flash of late sun reflecting off a meandering stream – down below, in what I like to call my Home Country.

I made the trip again a few days ago, the last leg of a long journey that began in rural Greece, not far from the island of Evia, where catastrophic wildfires continue to ravage forests, olive groves and villages, forcing thousands to flee by sea. From my seat in the bus, I watched the pyrocumulous cloud rise into the blue sky. The following day, from the airplane window, I saw similar plumes in northern Greece and Croatia before flying over the brilliant green fields of Germany and Belgium, so recently wracked by deadly flooding.

All of that just made me more eager to get on the Durango flight, knowing that the state was free of major fires – for now – thanks to a robust and soaking monsoon. But when I finally got out of the plane in Denver and looked out the airport’s huge windows, my hopes were dashed. The air was thick with smoke as dense as any fog. I stepped out on an outdoor terrace to, at last, remove the mask I had been wearing for nearly 20 hours straight, only to get a big gulp of campfire-scented air.

So much for my plane’s eye view of the Home Country. I saw no farm fields laid out in rectilinear perfection, no jagged mountain peaks, no rivers, no lakes, no mesas, no landforms. I only saw sea of light gray as opaque as any real ocean. I finally made out features on the ground through the gauzy veil just before we landed: the distinctive form of the Hogback Monocline which provides a boundary for the geologic San Juan Basin; the little boxes of a rural subdivision; a coalbed methane wellpad, then another, and another; and the silhouettes of natural gas plant distilling towers against an apocalyptic-orange sky.

The smoke wasn’t from any Colorado fires but had emanated from massive conflagrations in California, Oregon and Washington, got caught up in the wind, and blown across the entire West. The Dixie Fire, likely sparked by an electrical utility’s equipment, grew to become the second largest fire in California’s history. One day Salt Lake City – which suffered through its hottest July on record – was ranked as the most polluted in the world; the next day it was Denver. Boise wasn’t much better, and it had its hottest July on record, too.

As we drove into town, past big box stores and condos in a spot I will forever think of as the livestock Sale Barn and the Rocket Drive-In, and crossed the High Bridge over the Animas River, I took a gander to ground-truth the USGS stream gauge that I had closely tracked all summer. After a disappointing spring runoff, the river seemed to be vanishing altogether before the monsoon came and shot the levels up above the median for this time of year for a little over a week. Then the rains went and the water dropped back down. Now it’s once again approaching bottom-scraping levels for the boaters.

The water picture is far more grim elsewhere. Despite huge rains that triggered massive debris flows in the scars of last year’s big fires that shut down I-70 through Glenwood Canyon, and even though the Bureau of Reclamation has been releasing extra water from upstream reservoirs, Lake Powell continues to shrink and the big bathtub ring lining its sandstone shores grows. Lake Oroville, California’s second-largest reservoir, dropped so low that it can no longer produce hydropower – the first time that’s happened since it was built in the 1960s. In August 2019, the dam’s power plant generated enough electricity to power 639,000 California homes; this August it will power zero homes. That will further strain the California grid when the next heatwave hits and force grid operators to turn to natural gas for power. And McPhee Reservoir on the Dolores River is being dredged of 13,000 cubic feet of silt to squeeze the remaining drops of irrigation water through a canal. At stake are crops like the corn grown at the Ute Mountain Ute Farm & Ranch Enterprise, which needs another few weeks of water to reach maturity.

This is just one piece of the backdrop against which the International Panel on Climate Change released its most recent, and grimmest, report yet. The heading for Section A.1, for example, reads: “It is unequivocal that human influence has warmed the atmosphere, ocean and land. Widespread and rapid changes in the atmosphere, ocean, cryosphere and biosphere have occurred.”

The fires, drought, flooding and heatwaves are evidence of the change. And every ton of greenhouse gas added to the atmosphere will further warm the planet and drive us deeper into this disaster that is already playing out in the ground. Since there’s no chance of stopping emissions tomorrow, the warming likely will continue for decades, and the adverse effects likely will grow worse.

While the report, even in its staid language, oozes with despair, the authors do not advise to abandon all hope, nor are we doomed to descend into the Inferno. If global leaders act decisively and quickly to halt human-caused emissions by 2050, then it’s possible to keep the temperature from climbing to levels that would make life on this planet rather miserable.

Hope on this matter is hard to come by these days. What’s left of my optimism erodes with every story of another fire, another town burned to the ground, another heatwave, another rash of heat-related fatalities in the Arizona desert. I despair every time a politician blocks decent policy because it might cut into the profits of the fossil fuel corporations. And sometimes I just wanna say, “F*** it!”

But then I hear my daughters talking so intelligently and compassionately about the world and the future, and I see a new wave of young leaders taking the reins of power without compromising their values. I realize that giving up is not an option. There is hope. Really.

When I started writing this piece this morning, the hills and mountains lining the Animas Valley were still obscured by the smoke, and Hermosa Mountain, that icon of my childhood, was almost invisible. Then some winds kicked up and, almost miraculously, the smoke blew away. I looked up the valley and there was Hermosa Mountain and its distinctive red cliffs watching over the verdant valley.

The Land Desk is a thrice-weekly newsletter from Jonathan P. Thompson, longtime journalist and author of River of Lost Souls, Behind the Slickrock Curtain, and the forthcoming Sagebrush Empire. To subscribe, go to: www.landdesk.org.?