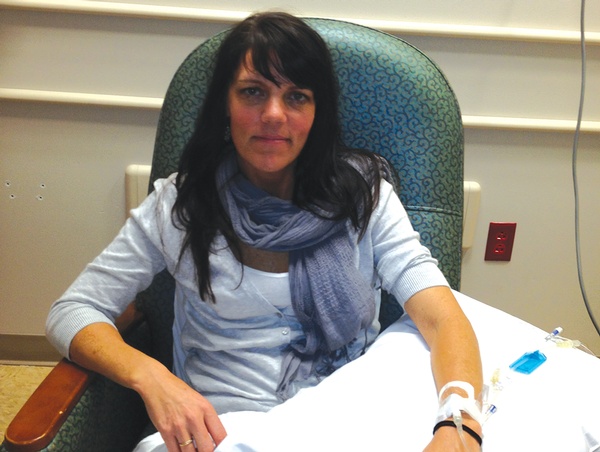 Carol Clark takes a seat at Mercy Medical Center, where she's been receiving monthly infusions of medication for the last 10 years for her MS. With the meds losing their efficacy, Clark is turning to an experimental stem cell therapy that she will receive in Mexico. Friends are holding fundraisers to help pay for the $65,000 procedure, which isn't covered by insurance./ Courtesy photo

For more than two decades, Carol Clark has suffered from the debilitating and degenerative effects of multiple sclerosis. Some days, her attacks are so bad she can’t get out of bed, and most days she needs a cane just to walk.

But there is hope of the horizon for the 50-year-old longtime local resident and business owner. A relatively new breakthrough treatment called HSCT, short for hematopoietic stem cell transplantation, is showing remarkable promise in stopping the disease in its tracks. The only problem: it’s deemed “experimental” in the United States and many Western countries, where doctors are not approved to administer it. The good news is, it’s offered in many other countries, including Russia, Singapore and just over the border in Mexico, where Clark plans to travel this spring for the potentially life-saving treatment. Of course, as an experimental treatment, the estimated $65,000 cost is not covered by Clark’s health insurance, meaning she has yet another hurdle to clear in her 20-year battle with MS.

Fortunately for Clark – who opened the Union Social House in 2020 and also brought us such brilliant inventions as Toast mobile cocktail lounge and the Durango Farmers Market – the community is stepping up to get her there.

“Over these past three decades, she’s given endless amounts of time, energy and love to countless community members,” longtime friend Louisa Drouet wrote on a GoFundMe page for Clark. “And now, this highly respected mom, friend, business woman … and simply incredible, exceptional, loving human with a contagious laugh needs our love, help and support.”

Drouet, along with several other of Clark’s friends, are organizing the GoFundMe page, as well as an online auction and March 6 outdoor fundraiser at the Union to help raise funds for Clark’s treatment.

With the funds, Clark plans to go to Clinica Ruiz, outside Mexico City, April 2. There, she will have her stem cells removed and frozen, undergo a grueling four-day chemo regimen to essentially hit the “reset” button on her damaged immune system, and then have her stem cells reimplanted into her body. Although not 100 percent successful, HSCT’s successes have even been highlighted on “60 Minutes Australia,” which followed the treatment and remissions of an Australian woman who travelled to Moscow for the procedure.

For Clark, a do-it-yourselfer from stoic Midwestern roots, accepting the help has been a huge lesson in humility.

“I had to swallow a gigantic vulnerability pill before I said, ‘yes, hit submit,’” she said of her friends making the GoFundMe page. “I am grateful beyond my imagination. They are rocking it right now; they can move mountains.”

For Clark, the path to this point started in 2000, when she was 30. She had been experiencing unusual pain and numbness that summer and generally was feeling tired and rundown. She went to doctors, who misdiagnosed her with depression and put her on anti-depressants.

“I though, ‘OK, I guess that’s what’s wrong with me,” Clark recalled.

Then, sometime after Halloween that year, she went to slip into a pair of high heels for a friend’s surprise 30th birthday party. That’s when she realized she couldn’t feel her feet – and in fact, hadn’t felt them for some time. At first, she tried to explain it away as lingering party wounds from Halloween, when she had gone as a roller girl and taken a number of messy spills. But, now in mid-November, she started to worry. She went to a doctor who finally diagnosed her with MS – an autoimmune disease where the body attacks its own central nervous system, destroying nerves’ protective myelin sheath. The attacks lead to lesions on the nerves, disrupting the brain’s messages to the body.

“It’s like if you were listening to a speaker and some of the wires were damaged, and instead of hearing music, you would hear noise,” explains Clark. “Imagine your nervous system like that speaker wire. Your brain sends a signal to your hand, but sometimes your hand is not getting the signal.”

In hindsight, Clark believes the disease actually first flared up when she was 26 or 27 and the right side of her body went numb. However, the numbness soon subsided, and she thought nothing more of it. Since her diagnosis at 30, Clark has battled the disease and learned to live with it. Over the years, she has tried several drugs on the market to treat MS, including daily injections of Copaxone.

However, she stopped taking the drug 15 years ago when she was trying to get pregnant with her son, Armand. Although she doesn’t regret the decision, pregnancy is especially hard on women with MS. After her son was born, she had an enormous MS relapse, which rendered her bedridden.

“I was unable to walk or lift my head for a month and half,” she said. “It was one of the most brutal experiences I’ve ever had. As a young and new mom all I wanted was to hold my son, but instead he was whisked away while I laid in bed trying to recover.”

This was the first of many debilitating episodes, highlighted by paralysis, headaches and exhaustion, which Clark continues to experience to this day. And, as new medications eventually lose their efficacy, the attacks get worse. She estimates she has been in and out of the hospital constantly for the last six years. Her most recent attack came in November 2020, when she was dealt the double whammy of MS and COVID and spent several days in the hospital. In addition, the attacks have rendered her extremely sensitive to hot or cold temperatures and affected her swallowing and other, uh, bodily functions. “I hate to talk about that out loud,” she admitted.

Perhaps worst of all, though, has been the wobbly legs, rendering her unable to work. “When I walk, I look like I’m drunk,” she said. “I can’t work at the bar or carry glassware.”

Facing the prospect of life in a wheelchair, she knew it was time to explore the stem cell option – likely the only one she had left. “I know from my MRI that I am progressing. There are lesions on my brain and spine,” she said. “I’ve been working my ass off to deal with it. I really don’t like it to stop me. Why? So I can sit on the couch and do nothing? I don’t want to be that person.”

Until she leaves for Mexico City, Clark is off all meds and undergoing regular steroid treatments at Mercy Medical Center to keep the illness at bay. The treatment in Mexico is expected to last 30 days, after which time she will come home and spend another five or so months allowing her hopefully rebooted immune system to recover. Of course, this means no work or anything outside her home – sort of an extended quarantine.

“My immune system will be like a newborn baby,” she noted. “But it’s something I need to do.”

Mostly, though, she wants to help others suffering from MS – especially younger people – to let them know there is hope. But time is of the essence.

“The sooner you do this, the better outcome you’ll have,” she said. “Maybe hearing my story will help somebody. That in itself feels good.”

To see the “60 Minutes” segment on HSCT treatment, go to: tinyurl.com/1rtm4sy