Help is hard to find
Historically low unemployment rates, other factors make it hard to hire in Durango 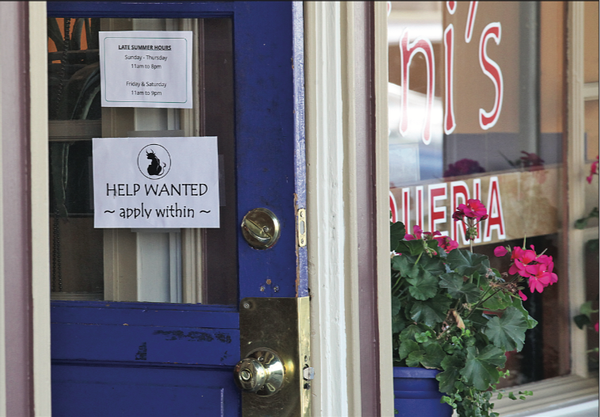 Nini's Taqueria in downtown is one of many local businesses in need of some good help. With historically low unemployment rates – along with other factors – it's definitely a job-seeker's market./Photo by Stephen Eginoire

The signs are scattered along Main Avenue in downtown Durango, calling out for “Help Wanted” or “Now Hiring” – and those are just the few advertising in the front window. Businesses across La Plata County are looking to hire, but these days it’s not easy finding any takers.

With historically low unemployment rates, fewer people are looking for work. With a booming national economy, businesses need more workers to keep up with demand.

Combine these economic factors with common labor challenges and those inherent to living in the Southwest corner of Colorado, and it makes it even more difficult for Durango businesses to find the right fit.

Senior economist with the Colorado Department of Labor and Employment Ryan Gedney said it’s a good problem to have.

“I’d prefer to see ‘Help Wanted’ signs than ‘For Sale’ signs,” he said.

The current unemployment rate in Colorado is one of the lowest in the country at 2.8 percent, falling in fifth nationally behind New Hampshire (2.7), North Dakota (2.6), Iowa (2.6) and Hawaii (2.1).

It’s more than one percentage point lower than the national rate of 3.9 percent – a number the United States hasn’t seen in almost 20 years.

It’s not just about the unemployment rates, though. Job growth, the rate at which jobs are created, is also an imptortant number for economists like Gedney. And it’s an impressive one for Colorado at 2.9 percent, which ranks it the sixth highest in the country.

At this point there’s more job openings than unemployed people to fill them, according to Gedney. Colorado has less than 100,000 unemployed workers with a workforce of 3.1 million.

In addition, wages have gone up dramatically across the country. In Colorado, wages increased by 4.5 percent in the years 2016-17.

“That’s some of the strongest wage gains we’ve seen in 10 years,” Gedney explained.
Overall, he added, it’s a good time to be moving along your career path or out job hunting.

Some challenges to finding the right fit are nationwide problems – like gaps in skills and technical expertise – others are unique to the Durango area.

Executive Director of the La Plata County Economic Development Alliance Roger Zalneraitis said it was the same scene last year. In fact, the expectation was that the signs would start to disappear after the fire. But, so far, that hasn’t happened.

One of the reasons the “Help Wanted” signs still linger is declining enrollment at Fort Lewis College, Zalneraitis suggested. Students have often taken seasonal and entrylevel service jobs in Durango. So, fewer students might mean an even smaller pool of potential hires.

Another possibility, according to Gedney, is location.

Tucked away in the Southwest corner or the state, it’s at least five hours to any major Colorado city and, Gedney said, about 80 percent of Colorado’s more than 3 million jobs are only available along the Front Range.

“I think Durango certainly has a draw, but for people to stay permanently it is difficult,” he added.

Durango is also a very expensive place to live, which makes it particularly tough to fill the seasonal or entry-level positions. Even though wages are on the rise nationally and the Colorado minimum wage has gone up each year since voters passed a mandatory increase in 2016, it’s still not what many consider a livable wage (which is $13.31, according to La Plata County Thrive! Living Wage Coalition) – especially for this area.

But, Southwest Colorado’s remote location and cost of living aren’t the only reasons it’s hard to find workers. In some cases, it’s about the skills gap.

Robert Whitson, owner of Express Employment Professionals in Durango, said the general labor pool is in good shape. It’s the skilled labor that is difficult to find, like carpenters, dry wallers, cement workers, plumbers and HVAC specialists. And, this is true nationwide.

“People aren’t going into the trades anymore,” he said. “And, those are good paying jobs.”

In addition, many high schools no longer teach vocational and technical classes. Whitson said the 9-R Durango School District has brought back these types of courses, but nationally it’s something that’s missing from most school districts – and it’s showing in the labor pool.

“I don’t see any changes in the near future, and I don’t think we’re entirely unique,” Whitson explained. “It’s a good problem to have.”

To combat the tight labor market, companies might need to change their hiring strategy, according to the experts. They could increase wages or benefits, or even reduce education and experience requirements.

Even if companies do take a different approach, it’s likely to take something else to drastically change the labor landscape – something like a recession.

“More and more everybody’s expecting a recession,” Zalneraitis explained. “Until then, I don’t see this changing.” The United States does tend to experience a recession every eight to 10 years with the last one being in 2008 when the housing market crashed.

But, according to Gedney, history isn’t necessarily repeating itself. He said the United States is experiencing the second largest economic expansion in U.S. history, and both the country and the state are on course for long-term growth.

“I guess we’re in rarified air here,” he added