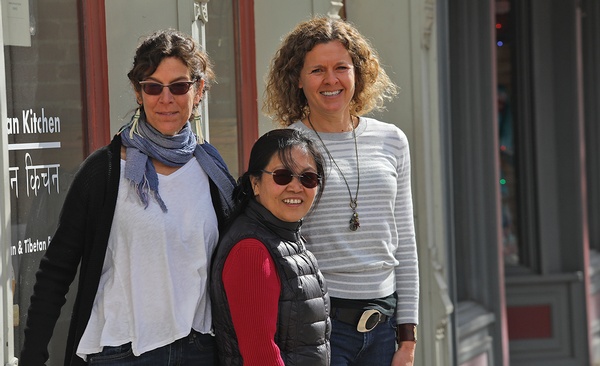 From left, Deb Swanson, Jyamu Bhotia and Julie Korb stand outside the Himalayan Kitchen on Monday. The three are taking part in a trek later this month to Jyamu's homeland in Nepal. /Photo by Stephen Eginoire

There is an unspoken code among the women from the remote region of northeastern Nepal where Jyamu Bhotia was born – quite literally, it is the code of silence.

“They are very shy,” Jyamu said. “There is no communication between mother and daughter or sister and sister. They aren’t sharing.”

But Jyamu, who was the first girl to graduate high school in her village of Chyamtang, would like to help break the silence. Or at least get the conversation going, on everything from women’s health issues to helping them sustain themselves and their families.

Later this month, Jyamu, along with husband Karma, who have been mainstays in the local community since opening the Himalayan Kitchen in 2007, will lead a three-week trek to visit eight villages in their homeland in Nepal. Although Karma visits frequently – he just returned from his latest visit last month – this will only be Jyamu’s second time visiting since she immigrated to the United States nearly 20 years ago.

The trip will be made in conjunction with the Bhotia Foundation, which the couple founded in 2014 to develop education, health and economic opportunities in the region where they’re from. Since then, the foundation has built schools, started a lunch program for school children, held medical clinics and helped rebuild schools and homes in the wake of 2015’s devastating earthquake (which Karma experienced firsthand.)

The goal of this trip will be twofold: to open up a dialogue on womens health, which is considered taboo, and to help women find more economic stability. The interest in helping women couldn’t be more apropos, given that Chyamtang was officially declared Durango’s sister city in 2015 in an effort to encourage cultural exchange between the two communities.

To that end, the trek will also include several locals, including Fort Lewis College Biology Professor Julie Korb and her family (twins Amara and Balin Kirk, 11; Jadin Kirk, 14; and husband, Dave), as well as herbalist Deb Swanson, owner of Dancing Willow Herbs. Another couple, friends of Korb’s who visit Durango regularly, will also take part.

Korb, who has been friends with the Bhotias for years, said it has always been a dream of hers to go on one of the treks. However, it wasn’t until this year that the stars aligned: she is on sabbatical from her job and her kids are now old enough to handle the 120 miles of hiking.

“I contacted Karma and said this would be the perfect time,” she said.

Part of the vision for the trek is to help women develop a source of income with products they make from plants growing around their villages. “Right now they simply harvest and bring raw materials to town to sell,” said Korb. “This isn’t sustainable, and they get hardly any money for the plants.”

That is when Swanson, a walking Wikipedia of herbal knowledge, was tapped for her expertise. The idea was to come up with ways to make the herbs more marketable, such as with soaps and essential oils.

“For several years, Karma has had this vision of helping to encourage economic development around medicinal herbs,” said Swanson.

Bur rather than just show Korb the tricks of the trade in her lab, Swanson decided to join the expedition.

“I just decided to go six weeks ago and pulled it together last minute,” she confesses. “I’m super excited.”

Despite the fact that the three women were the catalyst for the trip, the sister connection didn’t come full circle until recently, when Jyamu’s sister, who still lives in Chyamtang, became ill with giardia, an intestinal illness easily treated with antibiotics. Due to lack of education and shame associated with being sick – Jyamu describes Nepal as a “man power” society – she kept quiet.

Eventually, after several months of suffering and growing incredibly weak, her sister was brought to a hospital in Kathmandu where she received life-saving antibiotics.

Jyamu said this is but one example of stories she has heard of women suffering needlessly. Others endure urinary tract infections for years while girls as young as 12 are getting pregnant because they do not have basic sex education. “They say, ‘Do not tell. This is a shame,’” she said.

This is one thing Jyamu hopes to change during the trek, by helping explain to women that not only is there a biological reason for things – i.e. having your time of the month does not mean you are “possessed” – but there are simple solutions, from hand washing and boiling water to antibiotics and other “sanitary” products. She hopes to do this by hosting womens groups in each village, where women can feel safe to discuss such topics.

“By having these gatherings, hopefully they’ll open up and share,” said Jyamu. “Maybe we can break down that barrier, even in families.”

With Jyamu serving as interpreter, the womens groups will be an ideal time for Korb and Swanson to gather information on what herbs are used for what purposes. From there, the idea is to make suggestions available to the women on how to best use the resources available to them.

According to Karma, Korb and Swanson are the “perfect fit” for the mission, with Korb’s extensive botany background and Swanson’s knowledge of medicinal uses.

Swanson said she looks forward to learning as much from the womens as they do from her. “Really, it’s about gathering information; there’s going to be a lot of learning. I am going in with a blank slate,” she said. “We want to understand the ins and outs of plants from a folk level to a pharmaceutical level.”

With roads and development slowly encroaching on the region, one concern is protecting the Himalaya’s pristine ecosystem. The area they are visiting is all within the boundaries of Nepal’s 580-square-mile Makalu-Barun National Park, one of the most biologically diverse regions in the world. Covering everything from subtropical to alpine ecosystems, it contains some of the highest peaks in the world and butts up against Sagarmatha National Park, home to Everest.

“Industry and roads are going to come to the area eventually over the next several years, and there is such a huge export business of medicinal herbs, and so the Himalayas are kind of fragile in terms of overharvesting,” said Swanson. “Through our efforts, we can hopefully encourage them to grow instead of gather.”

Karma – who once spent time as a Buddhist monk – said care will also be taken to protect and respect the endangered Nepalese culture, while gently nudging them forward. For example, despite the Himalaya’s idyllic image, alcohol and domestic abuse run rampant – something he credits to lack of understanding and education. “You have to go very slowly, to touch the heart. And once you touch the heart, they will open their heart and follow in the direction you want them to go,” he said.

The road to the future

And while all agree on approaching the mission with cultural sensitivity and respect for tradition, they add change is coming to the region whether residents are ready or not.

According to Karma, the area was closed to visitation by the Chinese for a number of years for fear of Westerners entering Tibet. (The area offers the easiest access to Tibet, with Chyamtang only 15 miles from Everest as the crow flies.) However, in 1998, the Nepalese government began allowing foreigners to visit with a permit and also began building a “road” connecting the villages in the region to the outside world. Although the road is little more than a glorified dirt path – “The road in La Plata Canyon is much better,” Karma said – it has already shortened the trek to Chyamtang by two days since 2014.

“This is still the most pure Nepalese culture. They still live in the stone age,” he said. “Once the road is open, people will come from all over. Local people really look forward to the road, but they don’t know what they can lose.”

Karma’s biggest fear is that the area will become a thoroughfare for drug trafficking and “bad guys,” like other areas in the region, or it will be sullied by trash and plastic. He said the key to not letting this happen is education, which starts with empowering the people, especially women. This entails not just teaching them how to use the land, but how to respect the land – and each other.

“Education is not only reading and writing, but habits, respect and sharing,” he said. “Power is education. Jyamu and I believe that whatever we learn in our life, we should pass on.”

Children stand in a doorway of a house in Jyamu and Karma Bhotia’s home village of Chyamtang. /Photo by Karma Bhotia 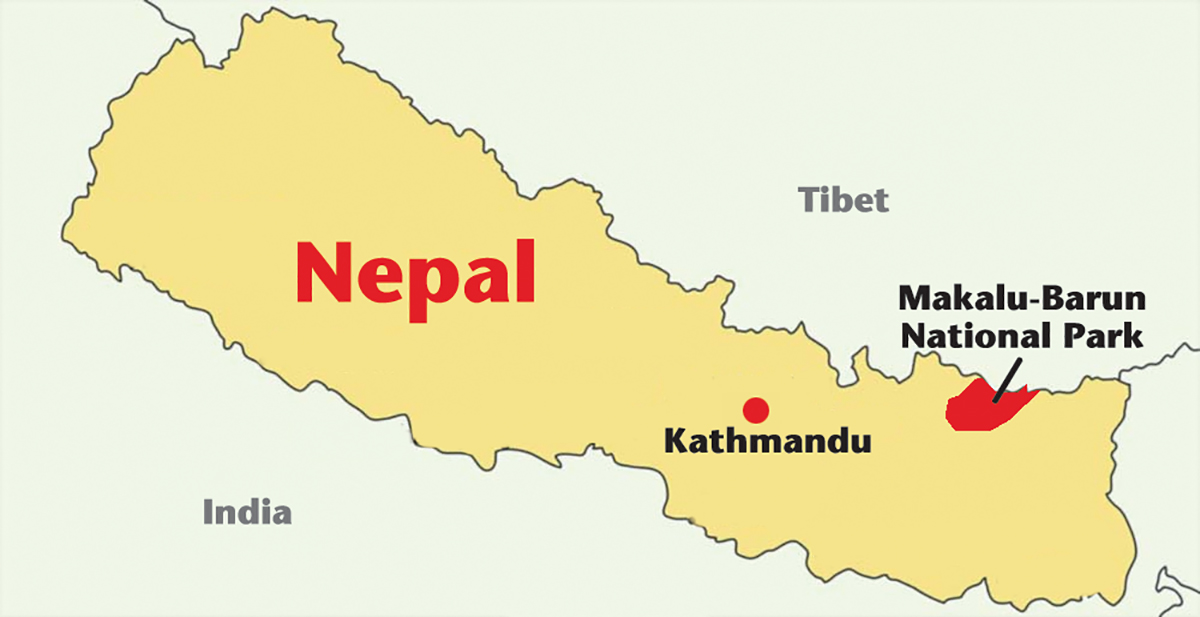 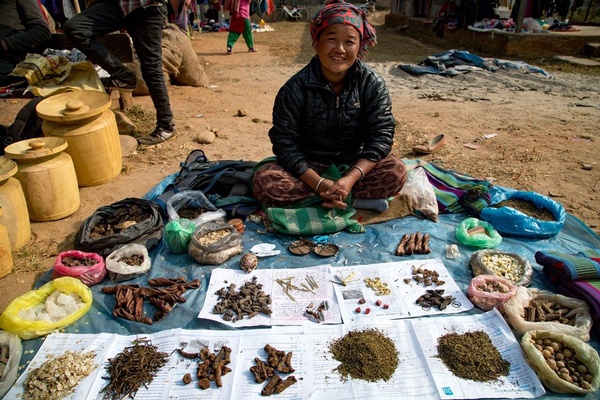 A rural Nepalese woman sells medicinal herbs in the lowlands. It is common for village women to gather plants and herbs over the summer in the highlands and then head to the lowlands in the winter, where it is warmer, to sell their goods./Photo by Karma Bhotia.

In addition to focusing on womens economic and physical health, the Bhotia Foundation will also be delivering basic supplies to villages along the 120-mile trek.

To help bridge the cultural divide with the universal language, the Rio Rapids Durango Soccer Club has donated soccer balls and pumps. Local students are also donating money for school supplies for their Nepalese counterparts.

The foundation is also looking for donations of old reading glasses and hats (of both the ball cap and warm, fuzzy varieties).s Glasses and hat donations can be dropped off at Dancing Will Herbs, 1018 Main Ave. And, of course, monetary donations are always welcome. According to Karma Bhotia, founder of the Bhotia Foundation, all monies collected go directly to villagers and their needs – there is no administrative overhead.

To donate, go to: www.bhotiafoundation.org.