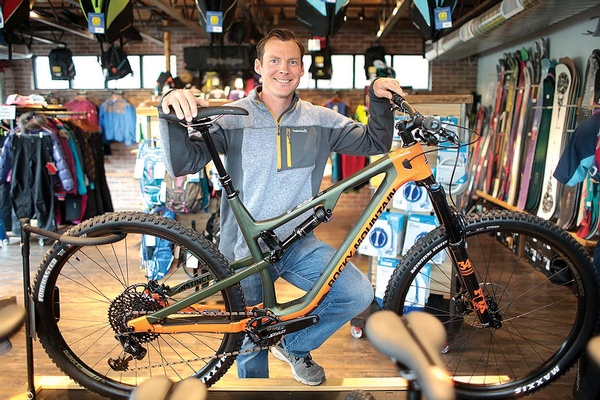 Hogan Koesis was hired as mountain bike director for Mountain Capital Partners, which manages Purgatory and several other resorts, last August. He's been loving life on two wheels since he was 12 years old and heads into his first summer at Purg with a passion for mountain biking and big plans for its future./Photo by Jennaye Derge

Anybody can do it. And, if Hogan Koesis, the new mountain bike director for Purgatory and its sister resorts, has his way, everyone will be.

“I feel like I come from the old era of mountain biking, and I’m passionate about creating a new way, about growing the sport,” he said.

The goal for Koesis is to create diverse trail systems at Purgatory and its sister resorts that cater to all types of riders.

Whether it’s pros training for competition or tourists taking their flea market finds on the trails for the first time, everyone will be able to enjoy the ride. That’s his vision.

Inexperienced or novice riders, for example, often have an image in their heads about what a “green” mountain bike trail would look like. but often, they find themselves faced with jumps or other features they’re just not ready for.

The experience ends up being intimidating, awkward or even painful – and the novice never rides again.

Instead of losing those potential fans of the sport, Koesis is creating a trail system that allows everyone to have the experience they’re looking for.

As part of that effort, he’s planning to add four new trails this summer to Purgatory’s official offerings – the first of which is a 6.4-mile green trail called Shangri-La. It will start at the top of Lift 1 on the frontside and meander around the backside, finishing at the base area.

“It’s going to be the trail that someone imagines when they’re at the top,” he said. “I want my 5-year-old to ride it.” But, just because Koesis is making the sport more accessible does not mean his parks won’t make the pros sweat. In addition to Shangri-La, he’s asked officials with the San Juan National Forest to approve three other trails – two “black diamond” and the third, a double diamond, or expert-only trail.

The expert trail is the 1.8-mile World Cup Downhill course. It’s actually been in use since the early 2000s, but with Forest Service approval, he’ll be able to make it official.

Koesis said the resort is hoping to get the OK from the federal agency by the beginning of June, but there’s no word yet on the exact date. Whenever the Forest Service does give him the go-ahead, he said they’ll be ready to hit the ground the same day.

With the World Cup course, Koesis plans to do a bit of rerouting and basic maintenance. The biggest change, though, will be on the lower portion of the trail. He said crews will bring it out wide near the finish in an effort to avoid crossing other trails, like Yellow Brick Road.

Of course, this new one won’t be the only World Cup trail on the mountain. Durango held the first ever UCI World Cup Mountain Biking event in 1990, and that course is still used today.

The new World Cup Downhill course, along with the two black diamond additions, Links and Pirate, signal the resort is shifting back to its competitive roots.

Koesis hopes to host more events in the future that are sanctioned by the UCI (Union Cycliste Internationale), the world’s governing body for cycling. In fact, there’s one already on the schedule this summer.

The Pro GRT series, or Pro Mountain Bike Gravity Tour, makes its debut at Purgatory over Labor Day weekend. The UCI-sanctioned event, which features dual slalom and four-cross (a new style of racing with four racers on a purpose-built downhill course), is a professional mountain bike series.

Another highlight in Purgatory’s two-wheeled events calendar is the Scott Enduro Cup, presented by Vittoria in  mid-July. This event will feature racers of all abilities – from first-timers to pros – on backcountry rides and lift-accessed races.

Koesis is also bringing in the Rocky Mountain Race Series, which debuted last weekend at New Mexico’s Pajarito Mountain, one of Purgatory’s sister resorts. The competition features dual slalom, cross country and downhill courses, and comes to Durango in mid-August.

Koesis has been loving life on two wheels since he was 12 years old. The native Iowan said the sport is both natural and noble.

“It’s the only thing I’ve ever done in my life that mixes recreation with health,” he added. “I’ve always benefitted from riding bikes, so I’ve never stopped.”

He’s been on the business side of the sport for just more than 10 years. Last August, Koesis, along with his wife and son, decided to make Durango their home – where he believes he can make a difference.

Before that, Koesis spent seven years as the mountain bike director for Angel Fire Resort in northern New Mexico, just east of Taos. During this time, he was able to increase the resort’s offerings, standing in the sport and attendance. It’s something he plans to do at Purgatory, too.

He said the bike park industry in general isn’t really approachable. But, that’s what he wants to change.

Koesis said Purgatory has some of the best mountain bike terrain in the country. The scenery, natural features, topography, connectivity and even soil are just some of the attributes that make it so inviting.

He can see what’s possible at Purg and wants to make it a reality. “We’re going to change every trail to maximize the human experience,” he added.

No one builds a trail and never touches it again, Koesis explained. Every trail goes through multiple stages of refinement.

Some changes, like on a jump section of the Divinity Flow trail, are made to create multiple routes for a variety of riders. On the flow trail, Koesis said, they refined some of the jumps to give inexperienced riders a chance to slow down and take it easy. They also added some bonus jumps for advanced riders who want a challenge.

It might not be the experience of riding a trail that inspires the change, though. It could be the surrounding environment: building berms bigger or digging out turns to control water flow. Koesis is looking at each trail with an eye on sustainability.

Along with his efforts on the mountain, Koesis also worked with Trails 2000, the city and others, to help build the Skills Center and surrounding trails at the new Spur Line Trails system at Three Springs.

“Purgatory has been a fantastic partner, acting as the high country hub for trail experiences,” Mary Monroe Brown, executive director for Trails 2000, said in a statement. “We’ve built many of the trails on the mountain and now that Hogan is onboard, we’ve been able to expand our partnership to a higher level.”

He’s also somehow found the time to hit up pretty much every trail around Durango.

Koesis said he enjoys every single one and they all have something to offer, but when asked for some standouts – beside the ones at Purgatory – he gave up two in particular.

A favorite after-work trail is the 7-mile downhill at Stevens Creek off Missionary Ridge. Another top choice was the Colorado Trail, picking it up around Molas Pass and taking it all the way to town.

Less than a year in, and Koesis has already built trails at Three Springs, improved trails and offerings at Purgatory, and is working on a mountain bike master plan for all of Mountain Capital Partners resorts. All this with a passion for the sport and a drive to make it accessible to everyone.

“I’m definitely doing it for the mountain biking,” he said. “And, the future of the sport.” 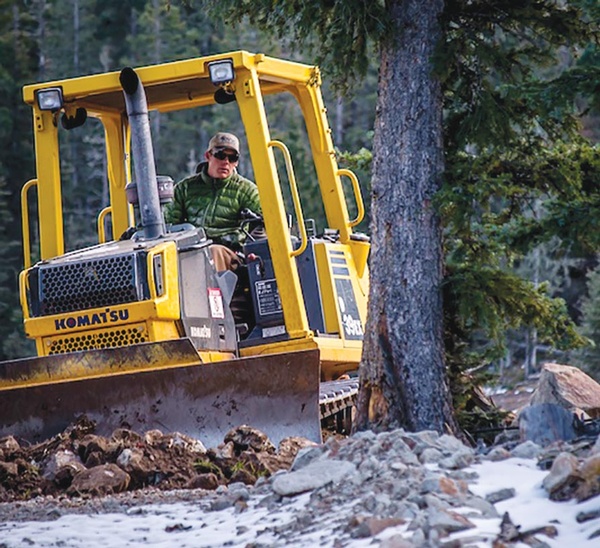 Purgatory Resort opens this weekend for the Iron Horse Bicycle Classic, and will be open daily for the summer season from 9 a.m.-5 p.m.

Activities include the alpine slide, bungee trampoline, zipline, climbing wall and more. They’ve also got paddle boards, canoes, kayaks and pedal boats at Twilight Lake on the other side of Highway 550.
To get the events calendar, prices and more, check out their website at www.purgatoryresort.com.

Rogue trails are generally created by riders on the fly or over years of use. In turns out two of the trails in Purgatory Resort’s four-pack of new offerings this summer started out rogue as well – the Links and Pirate trails.

Purgatory Resort put in a request with the Forest Service to make these trails official and put them on the map for good. Some trails in the Durango area, though, might be looking at a different fate.

According to Matt Janowiak, district ranger for the Columbine Ranger District, the Forest Service is looking at closing off more trails to mountain bike use this summer due to sustainability concerns. Because they’re built on the fly, rogue trails don’t get the attention and maintenance of designated trails.

One such example is the Long Hollow Trail, which was located near the lower campground at Hermosa Creek. It stretched for about a mile and was likely used for years. However, after gaining popularity on Strava, the trail became overused, leading to user conflicts, erosion and other problems.

“We have limited resources to take care of trails, and we’d like to use those resources constructively,” Janowiak explained.

He said the issue with rogue trails is that they wash out and rut out when they’re not built with sustainability in mind.

“They tend to just scar the land,” he added.