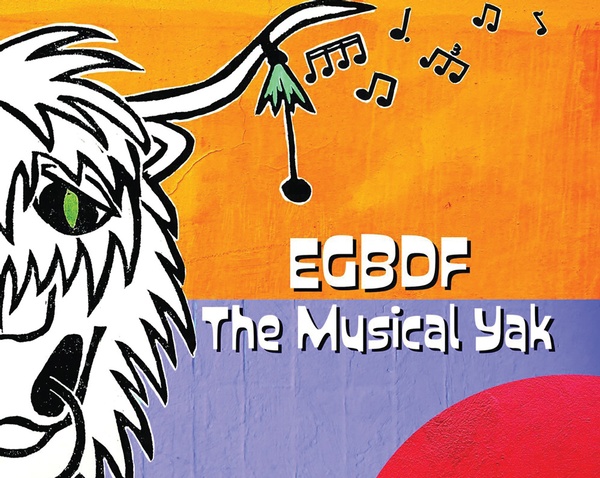 Musical theory may not be the easiest thing to teach 4- to 12-year olds, but local music teacher Katie Terrell Ramos has come up with a novel solution. Ramos, who teaches voice, piano, ukulele and early music education at Stillwater Music, recently released a children’s book aimed at introducing kids to the treble cleff staff using a musical yak.

The yak, named EGBDF (pronounced “Ee-Guh-Buh-Dif”) is the star character in her creation, EGBDF the Musical Yak. The 34-page book also features colorful block-print illustrations by Ramos. As a learning tool, EGBDF is ideal for ages 4-12, though musicians of all ages will appreciate the whimsical, educational journey, she says.

Ramos has been a music educator since 2012 and received a bachelor’s degree in music education from Metropolitan State University in Denver. From teaching musical theatre to rock ’n’ roll, she’s launched School of Rock programs and taught at an elementary school in Aurora before moving to Durango in 2019 with husband, Travis.

A passionate puppeteer, Ramos utilizes (and owns) nearly 50 puppets to help introduce music theory in her classes. She says one of the more challenging concepts for young students is the treble clef staff, the top set of lines seen on a piece of sheet music. To explain the notes E, G, B, D and F, Ramos invented “EGBDF,” a character that began as a blue monster and has since held many iterations, including a real-live dog and eventually, a cartoon yak.

Rather than “old-school” mnemonic devices, like rote memorization, EGBDF is a laid-back animal with “a heart made of gold.” He lives in Musical Land with other musical creations, like the Eighth Note Frog Band and Queen Treble Clef. Ramos puts his story to the tune of a familiar nursery rhyme that kids can easily sing. She points out that the treble clef staff isn’t normally introduced until third grade, but thanks to EGBDF, she is able to help students as young as 4 conceptualize it.

For the illustrations, Ramos spent nearly 200 hours drawing and carving 70 stamps from rubber. Each stamp celebrates a key character in EGBDF’s quirky evolution. These creations are inspired by a printmaking class Ramos stumbled into “when ceramics wasn’t an option.” Though at one point she felt she couldn’t even draw, block-print art came naturally for Ramos, who knew it was the perfect medium for EGBDF.

While EGBDF-the-character has been around for more than a decade in Ramos’ teaching, the actual book didn’t come to life till quarantine provided the space. Ten months after deciding to write and illustrate it, Ramos wholeheartedly believes that with the support of EGBDF and a strong will, anyone can become a musician.

“You don’t have to be good at music,” says Ramos. “You just have to show up consistently.”

EGBDF The Musical Yak is available for $15 at Maria’s Bookshop, Urban Market, and Create Art + Tea. You can also order a special signed copy via Ramos’ website, katieterrellramos.com, where you can also sign up for the next monthly virtual reading of EGBDF.