Hitting up Hoover
Monument to human ingenuity inches toward obsolescence 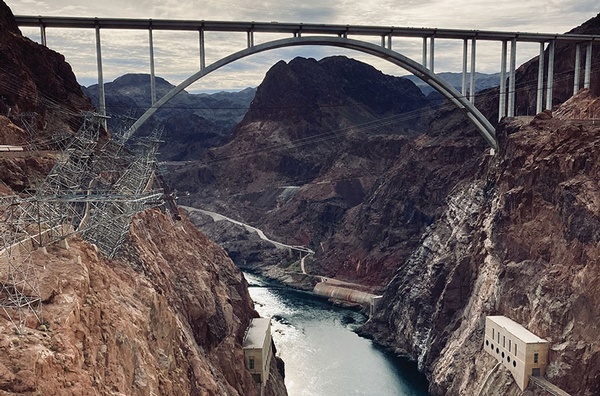 The altostratus clouds flatten the light and cast an eerie pall over the crumpled and craggy earth. They’ve been my constant – and only – companion since I left Los Angeles and drove across the vast expanse of the Mojave Desert. I haven’t seen many humans today, just cars and the spiky humanoid Joshua trees with their funky dance poses, so it’s a bit of a shock when I must roll down the window and talk to the security guy.

“Any firearms in the vehicle, sir?”

And, just like that, he lets me through to drive across the 726-ft.-high Hoover Dam. “Why a firearm?” I wonder. “How am I going to hurt a dam with a gun? They really should see if I’m toting a climate change-induced megadrought or alfalfa fields – things that really could mess up a reservoir.”

I brim with anticipation. I make it a point to visit Glen Canyon Dam at least yearly, but I’ve been to its older, downstream cousin only once in my life. I was 12, and my Aunt Ruthie and Uncle Ernie took my cousin Emily and me to see the wonders of the Southwest: Phoenix, El Centro, the Salton Sea, Oceanside, Anaheim, Las Vegas. After a few days at Circus Circus, we headed homeward, stopping at the dam for a gander, but I only barely remember it. I guess it didn’t make much of an impression.

This time is different. Maybe I’ve grown less jaded with age or more sensitive to a certain type of grandeur. As I roll onto the dam, I’m overwhelmed by the scale. Everything is so big – the rocks, the transmission towers, the intake structures, the bridge, everything. It’s all so massive I can feel it, as if it exerts its own gravitational pull.

Can the people crowding the sidewalks on either side of me sense it, too? I’m eager to get out of my car to see, but the parking lots on the Nevada side are all full, so now I’m in a line of cars crawling across the dam. We enter Arizona and start climbing up the other side. Somewhat frantically, I veer into a parking lot, pull into the only free spot, get out of my cocoon, stretch my legs, gape.

I pick a path and stroll toward the brutalist monolith, trailing a man and a woman, he wearing a leather vest and cowboy hat, she in pink velour sweats, a cigarette dangling precariously from her lips. The crowds thicken as I get to the dam itself. It’s January 2022 and COVID-19 is still a bigger concern than high gasoline prices.

People seem to be moving around in distinct herds. A young couple gazes at a pillar of concrete while the woman, probably an engineer, describes its purpose. I try to eavesdrop but the din is too much. Four cars, Ferraris maybe or Lamborghinis, with 20-something bros at the wheels, inch across the dam as even younger bros gawk. Later, I’ll look it up just to see: $100 per hour to rent a Lambo from Dream Exotics Las Vegas.

Also, just to know: How much does the dam weigh? The answer: 6.6 million tons.

A Bureau of Reclamation history of Hoover Dam tells me the sleek, pale shield wedged between Black Canyon’s walls belongs in the pantheon of global monuments, along with the Colosseum, the Parthenon, Cliff Palace and the Great Pyramids. Its construction, beginning in 1931, certainly was a monumental feat for the 5,000 workers who swarmed the desert for five years. I read one paragraph in the history several times to make sure I have the grisly details right:

“In the diversion tunnels the problem was even worse. Temperatures underground often reached as high as 140 degrees. Heat prostration became a deadly problem, killing one worker every two days during the summer of 1933. In July 1933, three women, wives of workers, died at the Cape Horn camp from heat prostration.”

Apparently fellow workers would drag the dead from Nevada into Arizona, since that state paid higher death benefits.

Eugene C. La Rue, the engineer tasked by the U.S. Geological Survey to locate dam sites on the Colorado River system, wasn’t too keen on the notion of a dam being built here. Oh, he was in favor of a dam. He wanted a lot of them – even forwarding proposals to plug the river at the confluence of the Green and Grand (Colorado) rivers (inundating Moab) and on the San Juan River just below Chinle Wash (inundating Bluff). But he wanted the big one, the first one, to be constructed at Glen Canyon, on the big bend just above Lee’s Ferry.

But the powers that were, including then-Interior Secretary Albert Bacon Fall and L.A. water czar William Mulholland, wanted the dam to be much farther downstream, near the town of Las Vegas (population 2,300 in 1920). And so it would be, much to La Rue’s dismay. The ropy, sun-baked La Rue’s assertions that the Colorado River Compact was based on wildly overestimated flows were also ignored. Eventually he got fed up and resigned from the USGS. But before you feel bad for him, consider what his job entailed: boating the San Juan, the Colorado and the Green when they were all still wild and free and silty, oh so silty.

Capturing that silt was one of the main reasons to build a dam. Flood control was the primary purpose, and banking the capricious flows of the Colorado, holding back water during generous years and releasing it when the river gets stingy, was secondary, with power production coming in a distant fourth. Later, Lake Mead also became the source for most of Las Vegas’ water. But yes, Hoover Dam originally was built partly to keep up to about 300 tons per year of the Colorado Plateau from flowing downstream where it would clog up irrigation canals.

The dam did its job splendidly: 15 years after water began backing up behind it, some 1.4 million acre feet of silt had accumulated in the reservoir. Glen Canyon Dam, completed in 1963, cut off about 90% of the sediment flow, saving Lake Mead from an even siltier future. Still, in the zone where the rushing Colorado River transforms into a stagnant Lake Mead, sediment is piled as high as 300 feet deep.

Hoover Dam also served its other purposes well, at least for several decades. But over the past 20 years, withdrawals from the Lake Mead “bank” have outpaced deposits, and the reservoir is shrinking. Last year, the surface level dropped below 1,075 feet in elevation, triggering the first tier of water cuts for downstream states. And for every foot the reservoir drops, the power-generating capacity of the dam’s turbines declines.

I find a relatively quiet spot, away from the spectacle of conspicuous consumption, and gaze out at the reservoir and the cliffs on either side. The 160-foot-high bathtub ring, almost bleach white, makes a stark contrast to the nearly black stone. The penstock intake towers rise up from the dark emerald water like art-deco era Manhattan skyscrapers submerged by rising seas. They weren’t intended to be seen, to be gazed upon like this by infrastructure voyeurs like me.

Upstream and around the corner, Las Vegas’ “third straw” – a new, much deeper water intake – is online. It and the accompanying pumping plant cost about $1.4 billion to build. It’s a lot, but worth it to hold onto the ability to draw from the shrinking pool for another couple of decades. The dam’s power plant was modified a while back, too, allowing it to continue to generate power until the lake drops to 950 feet ?– 100 feet lower than the old minimum power pool.

Sometimes, I think, humans can engineer their way out of a crisis. Or at least delay its worst effects. But then, Lake Mead’s shrinkage is merely a symptom of a much larger calamity, one that can’t be tackled with machines or technology or billions of dollars. The only way out of it is with restraint, but it may be too late for that.

I take a few pictures, watch a family of bighorn sheep below on the lake’s bleached shore. They peer back at me and my fellow bipeds. I amble toward my car, reluctantly toward the long drive ahead of me, and pass by the opening to a huge concrete-lined tunnel. I am unable, for a moment, to discern its purpose. It drops too steeply to be some sort of access portal for people or vehicles besides extreme skateboarders. Then I get it: It’s the spillway. When the reservoir threatens to overflow the dam, it escapes via this tunnel, dropping rapidly to the river far below.

It’s beautiful in the way functional structures can be. And yet, it no longer serves any real function – and never will – except, perhaps, as a reminder of what was. And as a monument to human arrogance.

The Land Desk is a newsletter from Jonathan P. Thompson, longtime journalist and author of “River of Lost Souls,” “Behind the Slickrock Curtain” and “Sagebrush Empire.” To subscribe, go to: www.landdesk.org.