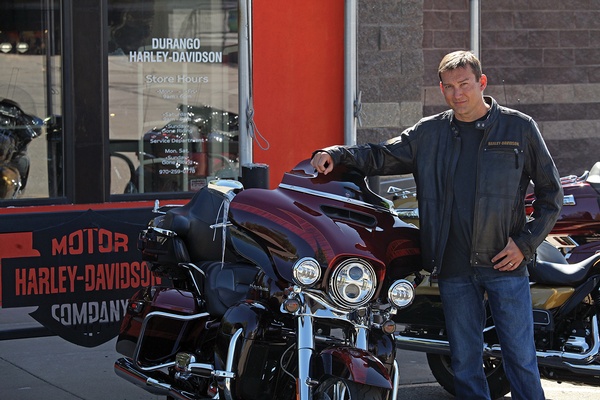 Trevor Bird stands outside his Durango Harley-Davidson store Tuesday. After the motorcycle rally faltered last year, Bird took up the reins to return the event to the Four Corners./Photo by Stephen Eginoire

They learned just weeks later, the region’s annual motorcycle rally – which should have been celebrating its 25th anniversary – had been cancelled.

“One of the attractive things about buying this dealership was the rally,” Bird explained.

So, the two got to work and were able to set up a handful of events – a bike show, demos and live music – welcoming riders who rolled into town.

This year, they’ve had a little more time to prepare.

With help from John Oakes, owner of California-based Freeze Management, and support from the Business Improvement District, Durango Area Tourism Office, City of Durango, La Plata County and others, the Birds have put together a three-day rally with events across the region.

Bird said they’ve put a tremendous amount of time and energy into organizing this year’s rally, but it’s worth it because it is an investment in the future.

“We’ve got a long-term vision with this,” he added. “By taking the right steps, we hope to take it back to when it was a significant event in the Four Corners.”

For more than two decades, the rally has struggled to stay afloat. It’s been passed from private owner to a local town to private owner and, although, all have wanted to see it thrive, none have found a way to make it financially sustainable. That’s something Bird hopes to change.

He said he’s being conservative in his approach. He’s not trying to hire big-name (and expensive) music acts – at least, not yet. He’s also trying to promote events that anyone of any age can enjoy.

When word got out that the rally would be family friendly (meaning no wet T-shirt contests or mud wrestling), Bird said he did catch some heat for it.

“We’re not trying to leave anyone out,” he added. “The biggest thing we’re trying to do is get people out and ride.”

One way he’s promoting that idea is by not having all the events in one spot.

The rally used to be held in one central location, where anyone who wanted to attend had to pay to get in. Even when the Ignacio Chamber of Commerce took over in 2006, all the events were held in downtown Ignacio.

This year, the events are intentionally spread out across the region.

As an example, the first event of the weekend is the Veteran’s Poker Run. For $20 – all of which goes to the Durango Elks Lodge – riders go to five different locations across the Four Corners, getting one card from each. In the end, the best and the worst hands get $100 gift cards.

The Poker Run starts at Durango Harley-Davidson, near the mall, heads to Four Corners Harley Davidson and
Berg Park in Farmington, then on to the Billy Goat Saloon in Gem Village, and finishes at the Rusty Shovel Saloon in Vallecito.

Other events include the Hooligan Dirt Dash – a flat track, dirt-bike race to benefit Durango BMX – at the Fairgrounds on Saturday; a vendor village at Sky Ute Casino in Ignacio throughout the weekend; and a poker chip run (much like the card game), which takes riders from Durango to Purgatory, Silverton and back.

The point is to ride.

After all, it’s what changed Bird’s life. He said he was headed for a corporate world of software management when he took his first ride on a Harley Davidson more than 20 years ago.

“After my first ride on a Harley, I never looked back,”he explained. All the rally events are intended to get people on their bikes and out across the Four Corners, enjoying the scenery and each other, and supporting the community.

Bird said the diverse landscape of the Four Corners – desert, mountains and forest – is unique and special. “The ride changes so dramatically, we want people to enjoy it,” he added.

As riders head out across the region, they’ll also shop at local businesses and spend at local restaurants – something the Southwest could use. The 416 Fire resulted in a lackluster summer tourist season, so a well-attending rally could bring needed boost to local businesses.

Bird said it's difficult to estimate how many people will attend the rally, but there are some positive signs. Most of their partner accommodations, including hotels and campgrounds, are booked. Riding groups from California, Texas and other parts of the country have made plans to attend. And early ticket sales for Saturday’s Hooligan Dirt Dash have been good.

Aside from the disappointed mud wrestling fans, community feedback has been encouraging. “Everybody has been so supportive,” he added.

One likely reason, according to Bird, is that every event benefits a nonprofit.

The Elks Lodge benefits from the Poker Run, and Durango BMX from the Dirt Dash. The other big beneficiary over the weekend is Building Homes for Heroes, a nonprofit dedicated to giving mortgage-free homes to severely injured veterans who served during the wars in Iraq and Afghanistan.

All of the beer sales throughout the weekend at Durango Harley Davidson, as well as beer sales at events at Main Avenue and 10th Street, and the sales from the Burrito Breakfast on Sunday morning before the motorcycle parade will benefit Building Homes for Heroes. In addition, Coors is donating all the beer, local businesses are providing the breakfast burritos and coffee on Sunday, and, Jon Sigillito, owner of Durango Party Rental, is supplying the rest.

Sigillito is not only a board member of Building Homes for Heroes, he’s been involved since the beginning.

He and the organization’s founder and CEO, Andy Pujol, both were living in New York City when the Twin Towers were attacked on Sept. 11, 2001.

Sigillito said Pujol spent a couple days helping out at Ground Zero. Sigillito came out of that experience changed, and the idea for Building Homes for Heroes was born. He also said Pujol has never taken a cent as the nonprofit’s CEO.

In fact, 93 cents out of every dollar the organization gets goes directly into the homes it gives to veterans. Which is why Building Homes for Heroes has a 4-star ratng – the highest possible rating – with the nonprofit watchdog, Charity Navigator.

Building Homes for Heroes has been working with the organizers of the Four Corners Motorcycle Rally for the past seven or eight years, and it’s the biggest fundraising event for the nonprofit in the area.

Along with donating all the sales, Sigillito said there will be donation buckets as well, and people can drop in whatever they can. Building Homes for Heroes is gifting a home every 11 days, so every dollar counts.

“If everybody donated just a little bit, it’s amazing what we can do,” he said.

For more on the Four Corners Motorcycle Rally or a schedule, visit www.fourcornersmotor cyclerally.com. For more on Building Homes for Heroes, visit www.buildinghomesforheroes.org. 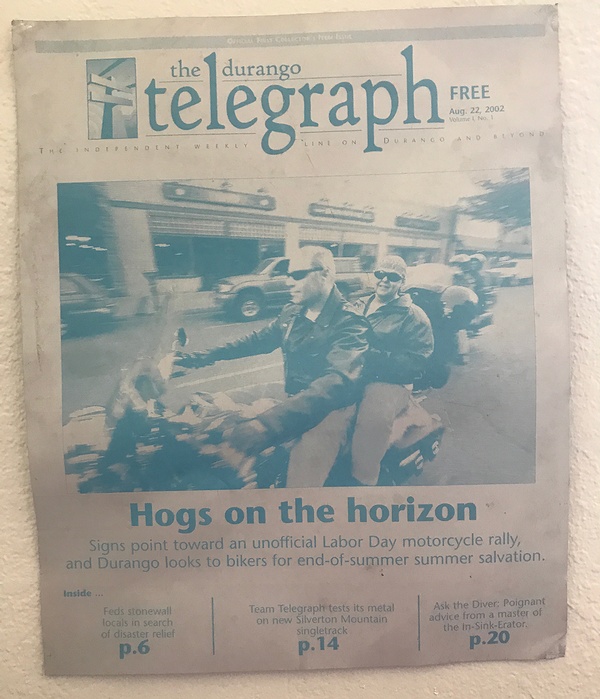 History repeats: The first edition of the Telegraph, published Aug. 22, 2002, featured a cover shot and story on the motorcycle rally.