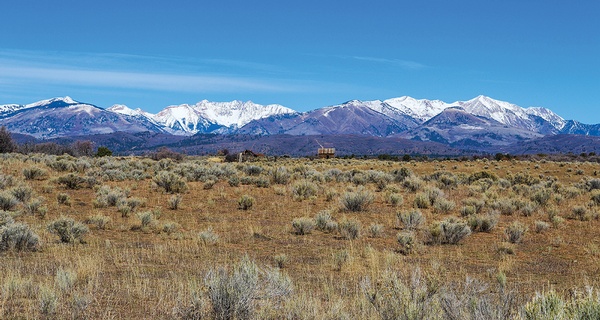 Primergy, a California-based company, has proposed building a 1,900 acre solar farm on largely undeveloped land southwest of Durango. The "Hesperus Solar Project"?would generate enough electricity for up to 56,000 homes a year, but local residents say the impacts to neighbors and the environment far outweigh the benefits./ Courtesy photo

With climate change posing one of the greatest threats facing humanity, you’d think a proposed solar farm in Hesperus would be welcomed and celebrated.

If only it were that simple.

Last month, news emerged that a California-based solar energy developer, Primergy, has proposed a 1,900-acre solar farm on private land southwest of Durango near Hesperus. When complete, the 155-megawatt facility would be capable of powering 56,000 homes a year.

The project, however, has been met with mostly strong pushback from residents in the predominantly agricultural and residential area. Opponents say the massive solar farm would destroy the landscape, adversely affect neighbors and impact wildlife.

Indeed, the proposed “Hesperus Solar Project” would be among the largest – if not the largest – industrial developments in La Plata County as well as one of the biggest solar farms in Colorado, if constructed.

Though the project is in the beginning stages (Primergy submitted a permit application to the county last week), the proposed farm has raised questions over how to build a sustainable energy future without sacrificing the environment and quality of life.

Reducing carbon emissions and transitioning to more renewable energy sources, such as solar, is considered part of the solution to slowing the impacts of climate change. But increasingly, the environmental toll of renewables are being felt as more projects crop up across the United States.

“I think we as a society are learning that renewables are land-intensive,” Joshua Radoff, the Renewable and Sustainable Energy Specialization Lead for the Masters of the Environment program at the University of Colorado, said. “But the more we’re aware of that, the more we can proactively address it.”

It’s unclear why Primergy targeted this sliver of Southwest Colorado for its project. Bryson Hull, a spokesman for the company, said another developer previously approached the families involved before Primergy was formed. He did not, however, provide further details on how or when plans began to formalize.

The land in question is just east of Highway 140 and north of County Road 141. About 800 acres will be leased from the trust of now-deceased State Sen. Jim Isgar, and another 800 acres will be bought from Three Sisters Durango, LLC. Matt Isgar and Sherry Wertz (co-owner of Three Sisters), both longtime residents, did not return requests for comment. (Also, a portion of the project involves FLC’s Old Fort).

Residents in the area first learned about the project in early October after Primergy sent a mailer out within a mile radius, inviting people to a community meeting where plans were revealed.

“I think they understood that we, as neighbors, weren’t going to be ecstatic by this decision, and (the developers and land owners) didn’t want to discuss it openly,” Jenne Settles, who has lived in the area for seven years, said. “I think a lot of people were motivated by money.”

At the meeting, residents learned that nearly 2,000 acres of agricultural land, mostly used for growing hay and grazing, along with undisturbed patches of piñon-juniper, were going to be leveled to make way for 500,000 solar panels and its necessary infrastructure.

“The fact that this project is so big, and that it’s going to destroy such a large area, is just remarkable,” Barry Spear, a 44-year resident of Hesperus, said. “The negative impacts outweigh any benefits that could come.”

In ensuing weeks, residents raised the alarm on the possible damage to the landscape, property values and fire hazards, among other concerns. Locals formed an opposition group, “Stop Hesperus Solar,” questioning the supposed benefits of the project.

“The impacts of this project go beyond our little community in Hesperus,” Spear said. “Do we have to destroy the environment in order to save the environment?”

Power to what people?

Primergy, for its part, has gone to great lengths to mitigate the impacts of such a large project, Hull said, and will continue to tweak plans throughout the county land-use planning process. “In every stage of every energy project, things get changed all the time,” he said in an interview with The Durango Telegraph.

According to records submitted to La Plata County, Primergy has conducted a full survey on factors such as the ecosystem, fire danger and wildlife impacts. And Hull said Primergy is committed to maintaining open lines of communication with residents to hear what they have to say. “Primergy is for sure interested in being good neighbors and listening to concerns,” he said.

Of course, the biggest benefit of the solar farm, Primergy says, is the “zero-emission electricity.” This comes at a time when both the federal government and many states, including Colorado, have adopted ambitious targets to cut fossil fuel emissions. The Biden administration, for instance, has said the U.S. needs to procure 40% of its energy from solar projects by 2035.

But whether or not the energy from Primergy’s proposed solar farm will stay local remains a point of contention. Hull said Primergy cannot sell power to customers directly, but its power would be bought by a participant in Tri-State Generation and Transmission’s grid system. Tri-State has a substation adjacent to the proposed location.

La Plata County is served by La Plata Electric Association, which is a Tri-State member. Jessica Matlock, CEO of LPEA, said in a statement the association is not involved in the solar project and is not bound to buy the electricity.

“If the project proceeds and results in the generation of cost-competitive power, LPEA may be able to purchase power from the development in the future, but it is too early to judge the feasibility of that,” Matlock said.

Cleaner, but not clean

Though solar and other forms of renewable energy are cleaner alternatives to fossil fuels, these energy sources are not without consequences, several experts say.

Jeffrey Lovich, a research ecologist for the U.S. Geological Survey’s Southwest Biological Science Center, has specifically studied the impacts of large-scale solar projects on the ecosystem of the Southwest. Studies found birds flying above panels are killed from solar radiation, wildlife is displaced and local temperatures increased. But that’s only some of what we know from limited research, he said.

“We have the technological know-how to deploy huge facilities for renewable energy, but we don’t fully understand all the negative effects or how to mitigate them,” Lovich said. “Everyone is in a big hurry to get renewable projects built, but they don’t bring scientists in to study the before and after effects.”

Lee Walston with the Argonne National Laboratory’s Environmental Science Division said the single biggest issue with solar is the sheer amount of land it requires (about 300-600 times what other energy sources occupy). A U.S. Department of Energy report said it would take 10 million acres of solar to hit net-zero goals by 2050.

As a result, researchers at Argonne are trying to improve the land-use functionality of solar farms, incorporating agricultural operations, such as grazing, introducing pollinators and allowing crops to grow underneath panels. Though most efforts have been in the Midwest, the technology is showing “promising” results, Walston said.

Walston said solar energy, in some ways, is the “younger cousin” to wind, which is now ahead of the curve, technologically speaking. Ten years ago, much like with solar now, there were concerns over decommissioning sites. But technological advances over the years have fixed those issues. Solar, Walston said, is on that same path.

“Nothing comes without consequence; there’s a trade-off for anything, and that’s true for solar,” he said. “But studies have shown solar, compared to fossil fuels, is by far cheaper, less harmful to the environment and emits less greenhouse gas.”

Hull was unable to answer by press time if Primergy intends to incorporate innovative components to its project.

If not here, where?

Daniel Kaffine, a professor at CU-Boulder, said his job is to study the trade offs of renewable energy projects, weighing the benefits – such as lower energy prices, less emissions and better air quality – to the negatives, e.g. impacts to the ecosystem and encroachment on residential areas.

In the case of Southwest Colorado, Kaffine said Primergy’s 155-megawatt project is a lot of power, comparable to a medium-sized natural gas plant. And, should that energy stay local, it would offset one of the worst polluters: coal (Tri-State uses 56% coal).

“That’s a substantial amount of power,” Kaffine said. “It would take a lot of adverse impacts (to residents, the ecosystem, etc.) to offset the overall benefits. But from a local resident’s perspective, you have to ask: ‘How much weight do you place on the trade offs?’”

CU’s Radoff said that with the current technology available, meeting climate change goals is going to be land-intensive. The dilemma even has those among the environmental community torn – those who are in favor of addressing climate change and embracing renewables are often against such projects in their back yard.

“Renewable energy companies should not act like while it’s zero-carbon operations, it’s zero environmental impacts,” he said. “There should be more of an understanding of the impacts.”

When it comes to solar, many proponents say the better option is to put more solar panels on the rooftops of homes, strip malls and parking lots, instead of destroying vast swaths of the landscape that support wildlife.

Even still, Radoff said when you take in all the production and environmental factors of solar (including mining the metals for panels) vs. other fossil fuel-burning sources, the toll of solar is far lower than gas and coal. And with the need to address climate change, Radoff said the answer lies in making sure the right sites are selected and technology to mitigate issues advances.

“I think we’re all going to have to reconcile some of the impacts,” he said. “But, in my mind, it’s not whether this is the right direction, but how to improve it as we move along.”

Primergy hopes to have the $400 million solar farm operational by 2025, but it’s going to be a long road before the company starts putting up solar panels. In 2019, La Plata County adopted what’s known as “1041 Powers,” which allows local governments much more oversight of large-scale projects, such as solar farms. Primergy will be the county’s first test with the new regulatory authority.

“The county is a neutral party, first and foremost, but we’re here to uphold the land-use code and leave no stone unturned when we review this project,” Christy Kost, a natural resource planner with the county, said.

Kost said it will take at least six to eight months for an internal review. During that time, the county plans community outreach and involvement. “People are really concerned about their neighborhood; they haven’t been contacted, and there’s a lot of misinformation out there,” she said.

Part of that process, too, will be scrutinizing the effects of the project. Jon Holst, energy and wildlife senior advisor for the Theodore Roosevelt Conservation Partnership, said an oil and gas project of this scale would undergo intense regulation, and the company would have to pay millions of dollars to offset impacts.

The proposed Hesperus Solar Project, for instance, would be right in the middle of critical elk and deer habitat. Primergy, it should be noted, has included a 1,000-foot-wide corridor bisecting the project for migration, among other measures.

“No one disagrees that climate change is a major concern, and we need renewables on the landscape,” Holst said. “But it would be a shame to make the same mistakes we made with oil and gas. If we’ve covered all the wildlife habitat with solar panels, what have we really done?”