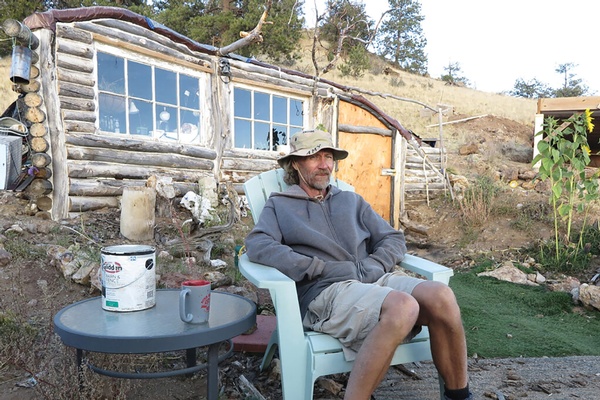 If you ask Park County Sheriff Tom McGraw about the housing crisis in his jurisdiction, he’ll describe a picture of extremes. It’s a place where it’s nearly impossible to buy an existing home for under $500,000 and one of the costliest regions in the state to build. Those high costs mean it doesn’t benefit developers to build affordable rental properties. And second-home owners can make a lot more money on short-term rental sites like Airbnb and VRBO.

At the same time, plots of land in Park County can be found for less than $10,000. McGraw said that attractive prospect has led those with limited means to buy these lots, sight-unseen, and move to the region with visions of homesteading their own piece of the American West.

It’s often less than a year before their land is abandoned again.

Indeed, Jim McKinney’s place looks in many ways like a 19th-century homestead. It’s little more than a hole dug into a hillside, fronted by two squat walls of sun-bleached aspen logs. It’s all topped with layers of canvas and blankets. He calls it his “Hobbit House.”

Recently, while driving the county’s backroads, McGraw stopped to chat with McKinney. The landscape was scattered with rusted RVs, teepees and shipping containers. There were broken-down school buses, and tires hung on fence posts that read “No Trespassing” in stenciled white letters.

McKinney, 56, brings in about $800 a month in disability payments from the federal government. He describes it as “definitely scratching out a living,” but some of his neighbors have it much worse. The cheapest lots in South Park’s wide-open valley sit along gravel roads, far from cell phone service and utility lines.

“A lot of people are out here solely because of the fact that they’re broke,” McKinney said. “I know one person ... they wanted to go south, they couldn’t afford the gas to get out of here. So, they suffered through the winter, and it is suffering.”

Park County is nearly the size of Delaware but only has two incorporated towns, Alma and Fairplay. Unincorporated communities dot the landscape, from Hartsel and Guffey in the south to Como and Jefferson in the north.

The majority of the county’s sparse population – a little more than 18,000 people – lives in and around unincorporated Bailey. The county has a reputation as a bedroom community for other, well-known destinations, leaving the cash-strapped Park County Planning Department performing many duties normally associated with municipalities.

“When you get into rural areas, it’s very expensive to build infrastructure for housing,” County Commissioner Richard Elsner said. “When you get to areas around Hartsel where people can buy 5 acres of land ... it is a good deal, until you try to build on it.”

Elsner said the resources just don’t exist to provide many services to these remote and isolated regions. In that case, Colorado law states property owners have to provide those services themselves.

“We have a lot of people moving trailers on and motorhomes and that type of thing. The problem is, what do you do with the wastewater?” Elsner said. “You’ve got to have a way to treat the wastewater, otherwise you’re going to pollute the environment.”

The county works with local nonprofits to try to bring down the cost of putting in septic systems. Still, that pollution remains a problem. Sheriff McGraw said he and his deputies can attest to that.

“We’ve had so many cases where we go out to these places and they’ve got 5-gallon buckets sitting all over and they’re filled with human waste,” McGraw said. “Or 55-gallon drums filled with it.”

As he continued his rounds, driving up into the hills, McGraw spoke of his appreciation for the culture of Park County. A conservative Republican himself, he identifies with the region’s fiery individualism and focus on property rights. He said he understands those he encounters who have an entrenched skepticism for any form of government.

But, he also knows there are vulnerable populations suffering out here. He told a story of a woman beaten by her husband last winter. When deputies responded to her call, they found her husband in a garden shed from Home Depot.

“He had built a wood-burning stove inside the shed, and when we got there to arrest him, there were two babies sitting in cribs right next to the fireplace. He was keeping them warm, but the conditions were just horrible,” McGraw said.

The majority of the makeshift shelters out on the landscape have been long abandoned, he said. More often than not, the people living in them either ran out of money, were not equipped to handle the cold or could not meet the county’s septic system requirements. It’s usually cheaper for the landowners to desert their property entirely.

At the hobbit house, McKinney keeps a stack of papers: signed permits and engineering schematics for the small permanent home he’s building on his land. He brought up the permits immediately after Sheriff McGraw got out of his truck. The sheriff assured McKinney that he wasn’t there for code enforcement.

McKinney looks for the best deals he can find on materials. A small trailer on the property is packed with windows he got for free on Facebook Marketplace. He works on building his house for as many hours a day as his back will allow.

At a time in Colorado when many people are being priced out of stable housing, McKinney sees himself as fortunate. He was living on the street for a time in his 40s and knows what it’s like to be truly homeless. For McKinney, he’s hoping to move into at least part of his new house before winter sets in.

For more from Colorado Public Radio, go to www.cpr.org ?