How the garden grows
Farm-to-School program looks back on a decade of innovation, hard work 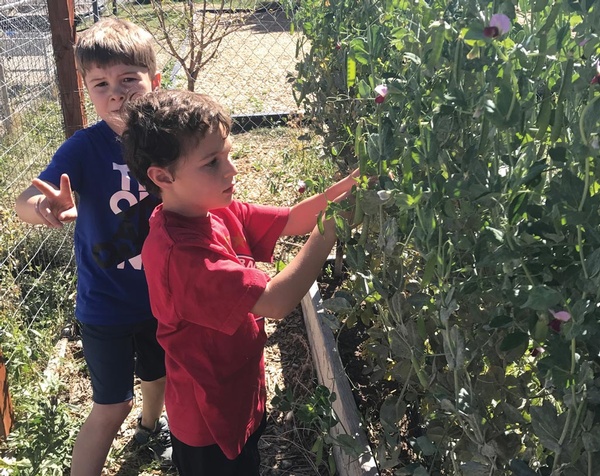 When Krista Garand first started working with the 9-R School District in 2004, there was no such thing as a Farm-to-School program in the Four Corners. People were talking about bringing fresh, local produce into school cafeterias, but nothing was happening ... at least, not yet.

Then in 2006, after taking over the Nutrition Services Department at 9-R, Garand stumbled across an old email.

In it, someone was reaching out to the school district, saying they were willing to subsidize the purchase of microgreens from Turtle Lake Refuge. Garand followed up with the email and brought Turtle Lake’s microgreens to the students.

It was the beginning of the Farm-to-School program, which over the past decade has transformed area schools. Today, 9-R has several school gardens, serves locally grown fruits and vegetables, beef raised by local ranchers and processed by local butchers, and has an award-winning deli at Durango High School. It even has a receiving center able to service school districts across the region.

“One of my passions in the beginning was to make school meals more nutritious, healthier for kids,” Garand said. “Any opportunity to do that is a good opportunity.”

The first obstacle for Garand was simply having enough product. Back in 2006-07, the local food system wasn’t producing enough to feed an entire school district. So Garand focused on building relationships with farmers and ranchers, which is what the Farm-to-School program is all about. As the program grew and Garand strengthened relationships with local producers, the district began to buy larger and larger quantities. This gave rise to a new challenge – where to process and receive all that produce.

Garand said in the early days, the district would buy 20-30 pounds of produce a week. Today, it purchases hundreds of pounds each week. Of course, this meant they needed a place to store it all.

After a couple years of construction and grant writing, the district opened its new facility last fall, just after the start of the 2016-17 school year. It serves as a receiving center and distribution hub for school districts across the area.

Having the infrastructure to receive and process more and more produce every year also means the district can offer more and more fresh, local options to students.

“The truth is, it’s being served more than people know,” Garand said.

Although the school marks its menu calendar with the Farm-to-School logo, which lets families know when local meals are served, it doesn’t account for all its offerings. Sometimes Farm-to-School items are added after the menu’s released. There’s also a salad bar at each of the district’s schools, where a lot of local produce is used.

The short growing season in Southwest Colorado, which has its high time during the summer months when school is not in session, used to mean the Farm-to-School offerings essentially expired in the fall. Not anymore.

Garand has worked with local farmers to create a system where Farm-to-School produce is on the menu throughout the school year. As an example, she works with an orchard farmer in Delta who uses cold storage to preserve apples and supply them even over the winter months.

“The biggest thing is having people realize we’re doing it,” Garand said. “I would love parents to come have lunch with their kids.”

Parents are always welcome, she explained. One of the biggest events is Thanksgiving lunch, when the district brings in thousands of pounds of local foods. At Animas Valley Elementary, for example, chefs from the Glacier Club bring in the turkeys and the district staff roasts about a thousand pounds of root vegetables, like potatoes and beets.

It’s happening Nov. 15 this year at Animas, but all the district schools are serving up something special that week (details are available at www.durangoschools.org.)

Garand said one misconception is that local, fresh produce is more expensive. But, that’s not necessarily the case. One big factor in cost is freshness.

When purchasing produce outside the Four Corners, it could take days or even weeks to get the product. So, by the time it arrives, it’s much closer to its expiration date. They’ve even had some foods delivered just days before they expired.

Local produce, on the other hand, is often delivered within 24 hours. This means it has a much longer shelf life, which can save the district money.

The newest addition to the 9-R School District’s Farm-to-School program is its very own herd – well, sort of. The district recently purchased four cows from a ranch in Mancos that have been grass-fed and grass-finished.

They’ll be taken to Sunnyside Meats when it’s time for butchering and, eventually, be on the menu at Durango High. “It’s an innovative way of purchasing the highest quality meats for the schools,” Garand said. The key, though, to making it all work is the staff, she added. “If we didn’t have the high quality staff we do in our kitchen, we could never make (any of) it happen.” Along with the kitchen staff, the district also works with local nonprofits like The Growing Project of Southwest Colorado. The Durango-based organization works to foster environmental stewardship, sustainable food systems and improved health and wellness through projects like community and school gardens.

Each of the district’s seven elementary schools have gardens, as well as Miller Middle and Durango High School. It’s one of three core elements of all Farm-to-School programs – school gardens, education and procurement.

According to the National Farm to School Network, the key to healthy food systems is more than buying local and having a school garden. Children also need education. This is where The Garden Project comes in, offering hands-on programs to teach kids how to care for the gardens, process the produce and build healthy eating habits for a lifetime.

The biggest challenge, according to Taylor Henzler, The Garden Project’s school garden program coordinator, is having enough volunteers and materials. The group needs help with maintenance of the gardens, particularly when school’s not in session, and with funding.

Currently, there’s an emergency funding drive to help with the latter, including a Farm-to-Table fundraiser at Manna Soup Kitchen on Oct. 12.

As for the maintenance, The Garden Project staff plans to meet in the coming weeks to discuss a new approach called school-based community gardens. It’s an idea they got from Denver Urban Gardens, where community gardens are built at schools. Students use the gardens throughout the school year for food and education. Then, in the summer months, the community takes over. Everyone participates and benefits from the fresh, local harvest.

It’s also something Garand is passionate about – bringing healthy, nutritious foods to the 9-R community.

Over the past decade, she’s followed that passion and grown the Farm-to-School program into a thriving network of gardens, farmers, ranchers, teachers, cooks and kitchen staff who bring fresh ingredients and healthy education to schools across the region.

And to think, it all started with just a handful of micro-greens.

Where: Miller Middle School, around the back near the school garden