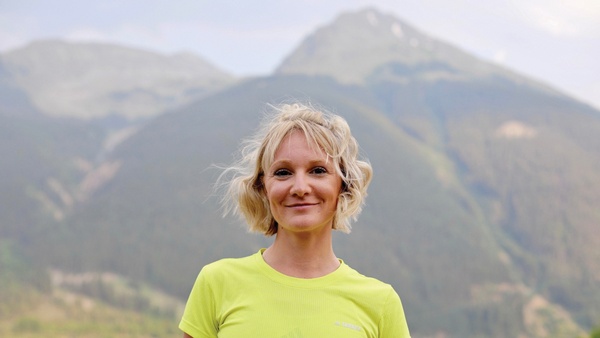 Silverton's Sabrina Stanley was the first woman to kiss the Hardrock on July 17 in the 2021 running of the 100-mile race. This is her second win.

Silverton’s Sabrina Stanley had given all she could for more than 100 miles. For the final few hundred feet to the finish line, she gave even more.

The 31-year-old ultra runner claimed her second win in the women’s division of the Hardrock Hundred Endurance Run on the morning of Sat., July 17. She was the first woman to kiss the finisher’s rock in Silverton in 27 hours, 21 minutes, 48 seconds, which was sixth place overall. Her time was only 3 minutes, 24 seconds behind the women’s course record set by four-time winner Diana Finkel in 2009.

Stanley has lived in Silverton since 2018, when she earned her first victory on the 100.5-mile course through the San Juan Mountains. Her first win came running the clockwise direction of the course. After two years of race cancellations, Stanley was back this year to defend her 2018 title and set out to earn “true Hardrocker” status by completing the loop in the opposite direction. But Stanley wasn’t out only to finish. Like every race she enters, she was there to win.

“Sabrina embodies that ‘wild and tough’ thesis we abide by,” Hardrock 100 director Dale Garland said. “She’s such a great competitor, and she has so much strength. Her living and training in Silverton, knowing the course and what it takes, she knew exactly what she had to do to finish and win again. Even when she hit her lowest point, she knew how to keep going.”

After a 6 a.m. start in Silverton on Fri., July 16, Stanley ran to Lake City and then to Ouray. From there, it was off to Telluride before a return to the finish in front of the Silverton School. Along the way, she and the 145 other runners were tasked with 66,100 feet of elevation change on a course with an average elevation of 11,186 feet and a high point of 14,048 feet atop Handies Peak between Lake City and Silverton.

“My No. 1 goal was to win this race in both directions,” Stanley said. “Mentally I don’t think there was ever any question; just physically could I go as fast as I thought I could? I wish I could have run faster at times, but I was also running faster at times than I thought I was going to.”

Stanley said she knew during the last 2 miles that she wasn’t going to be able to break Finkel’s record. But that didn’t stop her from pushing as hard as she could to the finish.

“I still wanted to get as close to it as I possibly could,” Stanley said of the record. “I ran as hard as I could, and that’s all you can ask for. There’s a lot of things that went wrong, but there’s a lot of things that went right, so I don’t know if things had been different if I could have gone any faster that day. My time is my time, and it’s what I have to accept, and I am really proud of my time.”

Along the way, Stanley passed ultra running superstar Courtney Dauwalter, of Golden, who was the overwhelming favorite to win in her first career start at Hardrock.

Stanley said she ran hard at the start of the race before dialing back her pace. Dauwalter passed her a little more than 15 miles into the loop and built a 32-minute lead after 31 miles. But Stanley was able to make up the time and pass Dauwalter and build her own 30-minute lead. Dauwalter dropped out after 62 miles because of stomach issues that wouldn’t allow her to keep down food or fluids.

Stanley also had stomach issues along the way, especially around the 80th mile. But she refused to give up at a race that has repeatedly chewed up and spit out the best in the world.

“As tough as you think you are, there are going to be moments where you physically or mentally can’t push past certain barriers but you just have to keep going forward,” Stanley said.

Stanley burst onto the ultra running scene with her first Hardrock 100 win in 2018. It capped a year in which she had put together podium finishes at races such as the HURT 100 in Hawaii and Western States Endurance Run in California.

She has continued to strive for greatness in a sport where athletes are regularly celebrated for cheering on rivals rather than approaching races as fierce competitors. Stanley has done it her own way, with throwback competitiveness that is no longer a norm.

“I’m supposed to accomplish big things. I believe that. My soul has ached for greatness since I can remember having conscious thoughts. ‘You’re going to know my name one day.’ It is a fact in my brain, not a dream or a goal, but a certainty,” Stanley wrote three days after her latest win. “I get frustrated when people don’t understand my passion, my drive, my dedication. If they don’t understand me, I’ve begun to realize it’s because they’ve never felt the constant hunger for success I do every second of my life. It’s who I am. Maybe it’s ego driven or maybe it’s deeper. A trait passed down from my ancestors that they needed to survive. It presents itself unbridled and savage as ever in my heart, fierce and raw, and ready to attack.”

Before the 2018 Hardrock, Stanley made the decision to move from Steamboat Springs to Silverton to train every day on the trails that make up the course. Following her debut victory running the clockwise route in 30:23:36, Stanley committed to staying in Silverton along with her boyfriend, Avery Collins, to prepare to defend her title in 2019.

But the race would be canceled the next year because of avalanche debris and high-water conditions after a winter of heavy snow. Again in 2020, it was canceled because of the COVID-19 pandemic.

Collins and Stanley remained in Silverton, and during the course of four years, the town of 600 residents has become their home. She could feel it along the course where a large group of locals came to cheer her on to victory.

“Especially, after winning this, it’s crazy. The supermarket has a little sign in support of me and just to see the town’s excitement to have a local win was awesome,” said Stanley, who is originally from Onalaska, Wash. “Walking down the street, you know everybody. I grew up in a really small town, so it’s really comfortable for me to be in this kind of environment.”

“Silverton is becoming known as this ultra-athlete playground and base of operations,” Garland said. “It’s a feather in the cap for Silverton to attract these high-caliber athletes to live there and call it home. The people there embrace adventure races and Hardrock, and it can be a real positive toward making it a destination year-round.”

“With François, I was impressed with him from the start athletically,” Garland said. “He’s just a mountain running beast. Like a true Hardrock champion, he was gracious but was also competitive. Every time I saw him on the course, he was laser focused.”

D’Haene had the assistance of Durango’s Dakota Jones, who paced him through the night from Telluride to Silverton. D’Haene held off the hard-charging pursuit of Dylan Bowman, of Portland, Ore., who finished second in 22:45:50, a time that also would have beat the previous course record.

Garland admitted he was worried two years of cancellations would hurt Hardrock’s prestige. But with D’Haene and Stanley both holding off incredible challengers and chasing course records, he called it one of the top five Hardrock runs of all time.

“The level of energy and enthusiasm on all fronts, from volunteers to spectators to runners, it was special this year,” Garland said. “We were so thankful to everyone who was a part of our little run. We were worried it would lose a little of its luster, but it was an incredible year, and we can’t wait for the next time.” 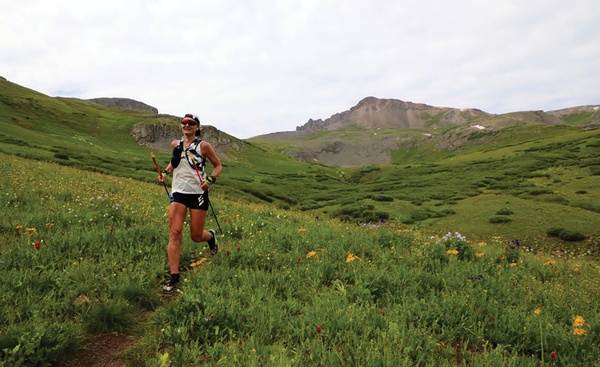