In the dumps
Colorado's recycling rate is ... not great 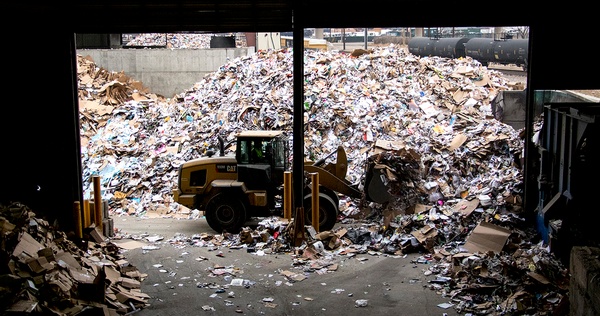 Recycled material is loaded at the Altogether Recycling center in the Globeville neighborhood of Denver. Despite its "green" reputati­on, Colorado's recycling rate is dismal, hovering between 15-18%./ Kevin J. Beaty/Denverite

Colorado’s recycling rate is stuck in the dumps, but advocates say 2022 could be the year the state gets it together.

An annual report from environmental advocacy groups Eco-Cycle and the Colorado Public Interest Research Group found the state kept 16% of its waste out of landfills in 2021 – a rate unchanged from last year. That number is also half the national average and far short of the state’s goal to divert 28% of its trash to recycling or compost facilities.

The state’s recycling rate has held relatively steady in recent years, fluctuating between 15-18% since 2017.

“We have this green reputation as a state, but our recycling rate is pretty trashy, and it’s been that way for a long time,” CoPIRG director Danny Katz said.

Katz, however, thinks new state and local policies could turn the tide.  The most significant is Colorado’s new producer-responsibility program. Earlier this year, Gov. Jared Polis signed into law the program, which charges companies making paper, packaging and food utensils to fund a statewide recycling system.

The program aims to provide free recycling to all residents. Only 30% of Colorado households have guaranteed access to curbside recycling.

It will be years before communities see any funding, though. Under the law, industry and policy leaders have until June 2023 to establish a nonprofit to collect fees and fund recycling programs. A current state implementation timeline suggests it won’t be operational until 2026.

The report notes many communities aren’t waiting for the state program to improve their recycling rates. It highlights Boulder, Fort Collins, Aspen and Durango as communities sending the lowest percentage of their waste to a landfill.

Other cities have ambitious plans to expand recycling and compost service. Denver is set to overhaul its curbside waste program, charging households based on the size of their trash bin while providing free compost and recycling pickup.

Contamination is one challenge for communities pushing to expand their compost systems. In September, A1 Organics, the state’s largest organic waste processor, announced a policy to reject truckloads with unacceptable levels of glass, plastic or other non-organic waste. That led Boulder to stop requiring restaurants to provide compost bins to all customers.

To reduce contamination, the report calls for new labels on compostable products and standards for compost quality.

Efforts to improve recycling and composting rates could be essential to reaching Colorado’s climate goals. According to the report, the state’s low recycling rate has prevented a reduction in climate-warming emissions equal to more than 400,000 cars a year.