In the flow
How high the river gets is anyone's guess – but one thing's for sure, leave the flip flops at home 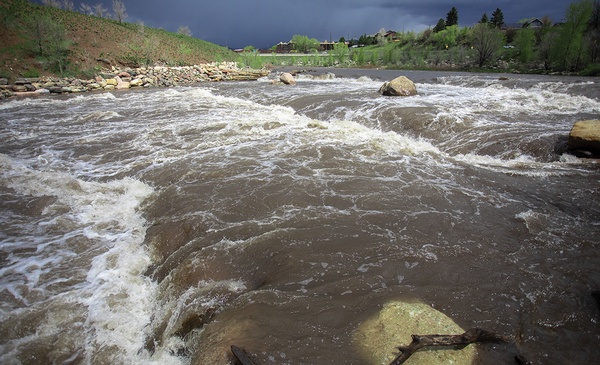 Smelter Rapid and many of the features above the Whitewater Park south of downtown Durango have changed in the past few years. Not just from natural erosion – particularly along the western banks pictured above – but from construction work near the city's water intake just above the rapid./Photo by Stephen Eginoire

Rafting season is already under way on the Animas River, which has been flowing at near record levels and almost double the average rate for this time of year. It’s no surprise to residents who look back on the epic snowfall from the past winter.

What many are wondering, however, is just what does the record snowpack mean for boaters? Particularly those attempting to run the city’s Whitewater Park south of town?

The latest round of construction on the park began in 2014, and the new and improved play features have been mostly lauded by boaters. But, the stretch of water has also had its share of hiccups.

On the river’s edge

Smelter Rapid and many of the features above the Whitewater Park have changed in the past few years. Not just from natural erosion – particularly along the western banks of the park – but from construction work near the city’s water intake just above the rapid.

Over the last several years, the river above Smelter Rapid has naturally been cutting into Smelter Mountain on the western side of the river. The more the river has eroded the western bank, the lower the river’s elevation has dropped.

This has meant more water flowing away from the city’s intake on the eastern side – where water runs directly into the City treatment plant to be processed and used by city residents.

This became a bigger problem in 2016 when planned maintenance to Lemon Reservoir turned the Florida River – which the city gets about 90 percent of its water supply from – into a trickle.

For the winter of 2016-17, the city needed to get its entire supply from the Animas and the intake had no pump. So, something had to change.

In late 2016, a project separate from the Whitewater Park construction downstream built rock weirs, or low-head dams, spanning the river above Smelter to help direct the flow back to the intake. In addition, the western bank along Smelter Mountain was raised up in an attempt to change the elevation and force the river back onto the eastern side near the treatment plant.

These new drops have caused boaters to get hung up above the rapid, with some rafts going for an extended, unplanned and often un-manned surf. For some, navigating the changes is merely a new challenge. For others caught unprepared, though, it could mean a long, cold swim.

“There’s still some work that’s needed in that stretch of river,” local boater John Brennan, who’s been on the Animas River for more than 40 years, explained.

Although it’s been a winter filled with plenty of snow, it won’t necessarily translate into record flows or flooding on the Animas.

According to Brennan, who was also involved with the Whitewater Park design as part of the Animas River Task Force, this year’s boating season, so far, is shaping up to be an average one.

Even when the peak of the spring runoff season hit – which typically happens in the beginning of June – records weren’t being broken. That year, according to data from the United States Geological Survey, the peak runoff occurred June 16 with 7,400 cfs and ranked the 23rd highest going back to 1898.

So, how will this winter’s snowpack translate into water in the Animas? Well, despite common belief, it’s not snow that makes for really high flows. It’s rain.

According to Brennan and others, flooding is far more common in the fall following heavy rain events, often the product of hurricane remnants.

In addition to rainfall affecting the flows and flooding, temperatures have the biggest impact on snowmelt. If temperatures stay moderate and rainfall steady throughout the spring, the snowpack will translate into a long, gradual and enjoyable boating season.

“What everyone’s hoping for is a very long runoff,” Brennan said. “All the way into late July.”

Alex Mickel, president of Mild to Wild Rafting and Jeep Tours, said it’s important, especially this year, for boaters to familiarize themselves with Smelter Rapid. Even if they’ve run it before.

Depending on temperatures, rainfall and other factors, conditions could change quickly. Mickel’s advice was, “When in doubt, scout.”

He also suggested taking a boatman’s or swiftwater rescue class. “Don’t be afraid to get out and get trained,” he added. “We’re going to have a prolonged period of high water, which is fun, but people do need to be prudent and prepared.”

Mickel said boaters need to have warm layers and be prepared for a possible swim – a life jacket and pair of jeans won’t do it. “The effects of cold water cannot be underestimated,” he added.

Water temperatures on the Animas tend to hover around 40 degrees in the spring due to the melting snowpack, and it can take less than a minute to affect someone’s ability to function.

“Give yourself a fighting chance,” Brennan explained. “Because you’ll only last about 30 seconds in the water.”

When the river is flowing fast and high, he said, it also can bring debris with it. Not just from the 416 Fire – which burned more 54,000 acres in the Hermosa Creek area last summer – but also avalanches.

The heavy snowfall this winter came with a record number of slides, including one that closed Highway 550 between Ouray and Silverton for almost three weeks. According to Brennan, it’s likely to mean lumber coming down the Animas River.

He added that after several low-water years, there are a lot of unstable cottonwoods along the banks. Fast-moving and high flows could wash those out and send them downstream as well.

“Once you have the preparation, you can enjoy this amazing playground that runs right through our town,” Mickel said 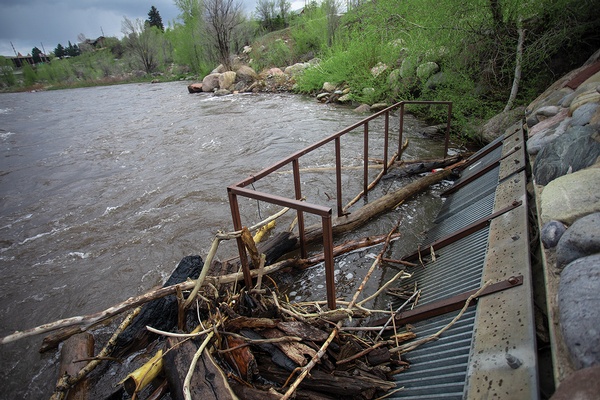 When the Animas River is flowing fast and high, it can bring debris with it. Not just from the 416 Fire – which burned more 54,000 acres in the Hermosa Creek area last summer – but also avalanches. Trees and other debris gets caught up in the city's water intake just above Smelter Rapid./Photo by Stephen Eginoire

• River Days is June 1 at Santa Rita Park, starting off with the Kayak and Canoe Slalom from 8:30-10:30 a.m. Events run throughout the day – including the SUP race, raft slalom, junior events, floatie rodeo, boatercross and more – ending with the River Parade and Viewing Party from 6-7:30 p.m. For more info, check out www.animasriverdays.com.

Latest on the Dolores

• The latest from the Dolores Water Conservancy District, is a likely boating release is in late May or early June on the Dolores River. For the latest, go to www.doloreswater.com.

• The Dolores River Festival happens on June 1 in Joe Rowell Park from 10 a.m. to dark. The event features live music from Afrobeatniks, Elder Grown and more. For more on the festival, check out www.doloresriverfestival.org.