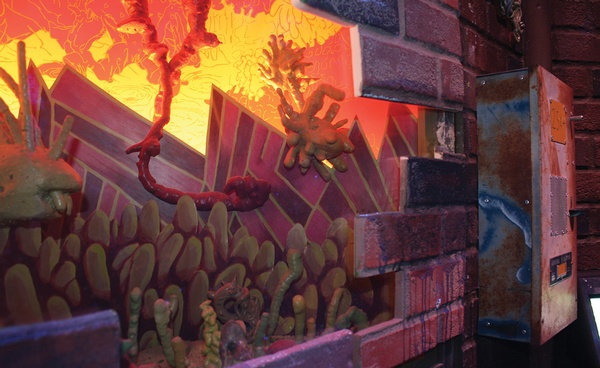 At any one time in the past year and a half, it’s safe to say a good portion of the world’s quarantined population was walking around feeling lost and disoriented. Calling this disorientation “fun” would be unnatural, but unnatural is what venerable entertainment company Meow Wolf does best. Things like “kaleidoscopic cathedrals, Corinthian catacombs, lush alien habitats, and dazzling and gritty cityscapes” – all of these are part of Meow Wolf’s highly anticipated Denver branch, the House of Convergence, which opened Sept. 17.

Yeah, it’s all pretty crazy, but as bizarre as these things sound, there is at least one thing Durangoans will find familiar within the astronomical strangeness: three local artists who contributed to the maddening mystery.

Chad Colby, Lexis Loeb and Hayley Kirkman are among the 110-plus Colorado artists who contributed to Meow Wolf’s new galaxy space, in itself an out-of-this-world feat considering more than 1,000 hopefuls applied.

“That was exciting,” Colby, professor of Art & Design at Fort Lewis College, said. “It tends to be that these artistic applications are quite competitive so I’m proud that we made the cut.”

Starting as an informal artists’ collective in Santa Fe in 2008, Meow Wolf put down brick-and-mortar roots with its original interactive art space, House of Eternal Return, which opened in 2016. Since then, Meow Wolf has expanded, with Omega Mart opening in Las Vegas earlier this year and now Denver’s Convergence Station.

But dates are just an illusion at the Convergence Station, and so is time and a sense of reality. The art space (just a football’s throw from the Bronco’s stadium) is a place where doors become portals to different worlds and even a small flick of a switch can send visitors into a multiverse wormhole. True to the Meow Wolf brand, Convergence Station presents a multi-layered mystery that we all naively think we can follow along and solve, but none of us actually can.

The mysterious story in Denver is of a freak cosmic event that merges four worlds together from different universes. Known as “Moreso,” the intergalactic incident erases the memories of all the folks left on the planet and spawns the disappearance of four women. In order to even begin to understand where these women went, Meow Wolfers must open The Quantum Department of Transportation gateway, or “QDOT.”

To get thier work in Meow Wolf, Colby had to open a gateway of this own. He initiated the application process in 2018 and recruited two of his former students, Loeb and Kirkman, to join him.

Both Kirkman and Loeb had taken art classes from Colby at the college and considered him a mentor. Loeb, who left Durango for a stint to travel and move home to Texas, eventually returned to Durango to take a job working for Colby in the FLC Art Department.

Upon her move back to Durango, Loeb became friends and roommates with Kirkman. The two soon began collaborating on many local art projects.

“I’m honored to be a part of the experience,” Loeb said. “I think more than being a part of Meow Wolf, I was excited to be doing another project with my old professor, whom I admire a lot, and one of my best friends. Going through that artistic journey with them has been a really cool, exciting thing for all of us.”

And what a journey it was. With the application turned in, it became a bit of a waiting game.

“It’s been a protracted process and there was like a year that we were just playing with ideas of what we could do,” Colby said.

Fortunately, this was actually a pretty fun perk for the trio, since they were used to working together. The three said they were given few details and little direction from Meow Wolf for a long time. However, this duration of unknowns resulted in grandiose ideas. Thinking their work space would be a full, interactive room, the team imagined creating things like a roller coaster or painting a large-scale mural on one of the walls. But when they got word their project was a 3-by-3-by-4-foot “gritty cityscape” diorama, they had to downsize their dreams a bit, but they didn’t flinch.

Colby immediately went to work on a prototype. Gleaning ideas from his previous works, he drew a backdrop for the diorama to match the apocalyptic theme. Meanwhile, Loeb and Kirkman helped with the foam sculptures and painting.

The team proposed a sea theme – a “glowing, colorful glimpse into another dimension” – filled with anemones, sponges and tardigrades (if you don’t know what a tardigrade is, I highly urge you to look it up). The artists explained the work as a world of inverted logic, where murals give life to creatures, reminiscent of the ocean’s Mesopelagic (or “twilight”) zone. And the color scheme – based off a kind of “Kermit the Frog green” – is what is called a “simultaneous contrast,” where the background colors cause the foreground colors to optically flux.

“They accepted our initial idea, which fit along with the quirky meta narrative that’s going on in the space,” Colby said.

Although some parameters were quite strict, such as having to work within a tight space, the team was given quite a bit of free reign in terms of subject matter, Colby said. Of course, due to the pandemic, the work mostly took place in separate, COVID-safe homes or airy garages. But even with the difficulty of social distancing, the trio pulled it together, fabricating a magical, bizarre world not of this one.

“It started as a sea-theme for us but transformed into an alien-planet aquatic life form,” Loeb said. “The drawings are coming alive into sculptures.”

It might be difficult to imagine exactly what that looks like, which is just fine, because you can see it for yourself on the fourth floor of the Convergence Station in Denver. To find it, all you have to do (after getting to Denver, of course) is wander in total disorientation through an intergalactic apocalypse of kaleidoscopic cathedrals, Corinthian catacombs, lush alien habitats, and dazzling and gritty cityscapes. 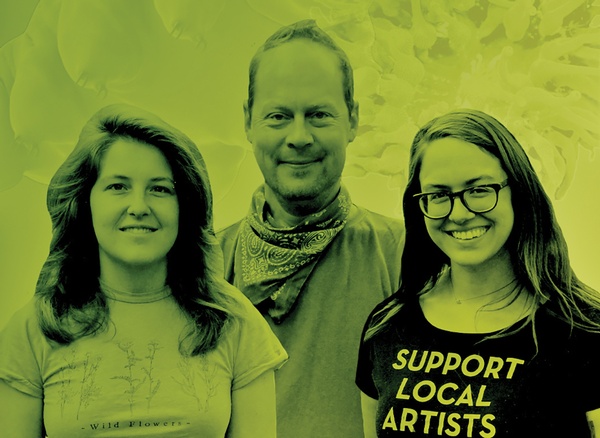