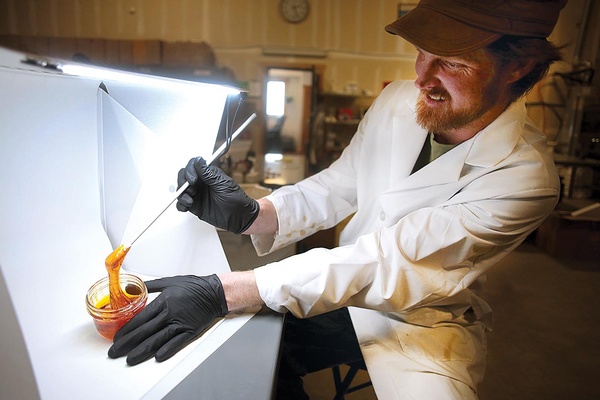 More than 12,000 years ago in the northern steppes of Central Asia sprouted a distinctive plant called cannabis. It’s considered to be one of the oldest cultivated crops, used for medicinal and spiritual purposes by anyone from Chinese emperors and Shakespeare to Jesus and Snoop Dogg. Over the millenniums, these humble roots proved to also nurture another kind of green: cold, hard cash.

Worth $6.7 billion in 2016, the legal cannabis industry in the United States is projected to exceed $22 billion by 2020. In other words, marijuana could be a bigger hit than the NFL, according to Fortune magazine. In light of the undeniable flush of tax revenues, confidence grows, and investors and entrepreneurs are moving beyond a puff-puff-pass business stance.

Cannabis business conferences and expos are flourishing, as are cannabis consulting companies, which offer everything from license application support to branding help. There are cannabis lawyers, cannabis data crunchers, cannabis real estate agents – and on the list rolls. In December 2016, the first marijuana-related company was listed on the New York Stock Exchange.

“Prohibition is crumbling. Invest in what comes next,” reads an ArcView Group ad in Marijuana Business magazine. Based on data from ArcView Market Research, cannabis is the fastest-growing industry in the country, but not many are rolling in dough yet. There are fees upon fees to pay, large sums of money needed for building infrastructure, more money needed to launch, and continuous hoops to jump through – not to mention the ever-looming threat of a federal government that may or may not swoop in and take all the joints.

“The (state, county and city) licensing fees are definitely costly and prohibitive to start a business,” John Wade, director of sales for local cannabis testing facility, Aurum Labs, said. “(Money) could be a deterrent in some people’s eyes, or it could be an easy obstacle for others. (The industry) is extremely competitive, and money doesn’t solve all startup issues; pure innovation does.”

In short, the cannabis industry is not for the faint of heart. It’s for men and women with a gut for risk and access to deep pockets. They thrive being on the outskirts of mass acceptance, and have a well-rounded grasp of various disciplines ranging from politics to genetics. They go forth blindly but boldly, knowing that money speaks louder than bong rips.

In Durango, total license numbers of cultivation, retail and production facilities have slowly climbed and steadied since July 2014 when applications were first accepted, according to Ben Florine, licensing and records technician for the City of Durango. As of April 2017, there are nine retail marijuana stores, five medical marijuana stores and one grandfathered-in grow operation.

“It’s far-reaching when you look into what costs go into all of this and how it impacts our local economy,” says Wade. One of Aurum Labs’ clients is a cannabis company called Sweet CO2 Oil. Owned by local entrepreneur Forrest Jones, Sweet CO2 Oil is the first CO2 extraction operation in La Plata County.

The CO2 extraction method is the latest and greatest way to get “the good stuff.” Extraction is usually done with hydrocarbons, like butane or propane, but recirculating liquid CO2 over the plant is considered to be a cleaner, safer way to separate THC in marijuana. As with anything that’s pure as unicorn fairy dust, CO2 extraction equipment is more expensive, and the process takes up to three times longer than hydrocarbon methods. But the proof is in the pudding.

The pure product is akin to shatter, or what Sweet CO2 Oil calls SAP, a heavy concentrate made popular by a recreational pastime called “dabbing.” Sweet CO2 Oil drops the SAP into cartridges, careful to see that the products touch only glass or stainless steel. The cartridges are then used by consumers in Sweet’s line of vape pens.

“You’re getting a cleaner buzz,” says Jones of his vape pens. “It’s much more of an edge removal as opposed to a sit- on-the-couch.”

Cannabis research and development company, Trichome Technologies, touts that soon, only 10 to 25 percent of cannabis will be sold in dried or cured raw product form, making extractions the next wave of the future. Currently, Sweet CO2 Oil can be found in 40 stores across the state. Like most startup canna-businesses, it’s been an uphill battle to get their products this far.

“It took us two years to get roots in the ground, which is like getting a pair of skis and not being able to use them for two years,” says Jones.

The recyclable, child-resistant packaging features symbols of Durango, the community that Jones credits with his ability to pursue this dream. He went to college with the Ska guys and is modeling Sweet CO2 Oil after the microbrewery’s approach to growing slow, but growing right. Like the Ska guys, Jones puts quality control and customer service as top priorities. Jones is also determined to help his employees grow as the business grows, so Sweet CO2 Oil is a living-wage employer. As well, he buys as many local products as possible, harvests energy using a system installed by Shaw Solar, and aims to be zero-plastic by the end of the year.

“We’re as organic as we can get,” says Jones.

To maintain the pureness of Sweet CO2 Oil, Jones is required to send every Sweet CO2 Oil product to Aurum Labs for testing. Fresh on the scene, proper lab testing is an indispensable piece to the burgeoning cannabis market puzzle. Not only will competent testing bring more validity to the controversial industry, but it also adds a layer of trust in the safety of these products.

“We’re not a policing agency,” says Wade of Aurum Labs. “We only receive samples, analyze them, and tell you the contents. The info we provide is leading to better businesses, allowing owners to make informed decisions
about how to be more profitable, more recognizable and more sustainable in the future.”

Aurum Labs launched in 2014, and other Colorado cannabis testing labs are, at most, only four years old. These are uncharted waters, but labs are working hard to formulate a standard for accreditation.

“The Colorado Department of Health & Environment wants to be as careful as possible because this chemistry – especially compliance chemistry – hasn’t been done in the U.S.,” says Wade. “This allowed us to create our own method through real experimentation and develop a method that was robust and very accurate.”

In the last nine months, lab technicians across Colorado have started working together, “sharing data as much as possible without giving secrets away,” to come up with standards so the science can be as transparent as possible, says Wade.

He and the Aurum Lab owners recently returned from the 2017 Pittcon Conference & Expo in Chicago, the largest analytical chemistry conference in the world.

“The biggest indication of national acceptance (of cannabis) from a scientific point of view is that (the conference) devoted one whole day for a cannabis science symposium,” says Wade. “What blew me away is that chemical companies have designed and are designing instrumentation directly for the cannabis industry ... the availability now is far greater than it was two years ago.”

According to the Marijuana Policy Group, a Denver-based marijuana economic and policy consulting firm, Colorado’s cannabis market is expected to plateau by 2020. From there on out, annual growth will be a steadier two-to five-percent each year, versus 26 percent.

But, like Jones says, nobody knows what’s going to happen. “There’s big pharma, state borders, politics, tax codes, regulations ...,” says Jones of potential downers to the boom. “It’s more high-stress than anything I’ve ever done... so I ride my bike to work two or three times a week.”

But it’s the community that drives him toward the next frontier. Besides the undeniable dollars it’s generating, cannabis is changing lives for the better, offering healthier alternatives to pain meds, curbing alcoholism and offsetting hard drug use, to name a few of the known pot pros.

“We are in the dawn of the benefits of what cannabis could produce,” says Wade. “I think we have explored roughly two percent of what the plant can actually do, so there’s 98 percent that’s possibly undiscovered. Only time can lead us to the ultimate benefits; we’ve just started scratching the surface in helping the human race get answers.”