It takes a village
Shanta Foundation honors leaders in Myanmar 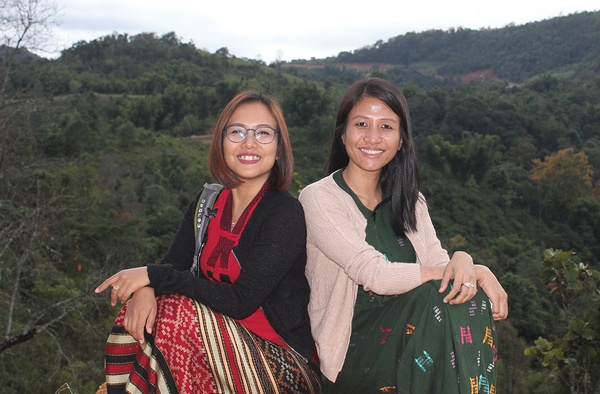 Dr. Khaing Zar Oo, who everyone calls Nge Nge, left, and Dr. Seinne Lai Zaw, right. As a licensed physician, Nge Nge manages all of Shanta's health programs. She also works with villages on leadership development programs in the southern Shan State, which is located on the eastern side of the country along the border with Thailand. Seinne Lai, who is also a licensed physician, joined Shanta in 2017 and oversees all country program operations.

In a rural village in the southern Shan State of Myanmar, tucked between Thailand, Laos and China, the people were in need of water when someone arrived with a helping hand. That hand wasn’t carrying bottles filled with water or the blueprints to build a water tank.

It did not come with a ready-made solution. Just an idea and a belief that the people in that village could build a water tank themselves.

That’s what Shanta is all about. It might take a year, or even two, but the women and men working for the Shanta Foundation, a Durango-based nonprofit that works with underserved rural villages in Myanmar, have discovered over the past 13 years that it is better to teach people how to solve their problems, than it is to solve those problems for them.

“The founders realized the power of a partnership,” Laurie Meininger, executive director for the Shanta Foundation, explained. “We’re not there to do for people, but to find out what are their needs, their wants, their desires and their vision of the future – for them, their families and communities.”

Then the question becomes, “How do we support that?” she said.

The Shanta Foundation stemmed from a memorable trip Durango residents Mike and Tricia Karpfen took to Myanmar in 2004. Inspired by the people and communities they encountered, they started with one health clinic and built up an organization currently working on projects in 22 villages across the region.

Dr. Khaing Zar Oo, who everyone calls Nge Nge, was hired by the Karpfens in 2008 to work as a translator in that first clinic. It was supposed to be temporary, lasting just 10 days. But, for Nge Nge, it became a passion that’s endured for more than a decade. Today she’s considered a part of that founding team and works as Shanta’s regional manager for the southern Shan State.

Nge Nge said she’s changed a lot over the years. “I’ve become more patient,” she added. “More of a listener than a speaker.”

It’s a change she attributes to Shanta’s model and approach to community development. The foundation works within a six-year timeframe to improve the health, infrastructure, financial well-being and educational outlook of an entire community.

“The goal that we would like to reach is not the project,” she explained. “It’s sustainable community development.”

This is also what intrigued Dr. Seinne Lai Zaw, who joined the group in 2017.

She’d been working for another nonprofit organization based in Myanmar when she learned of the Shanta Foundation. She was captivated by the organization’s unique model of partnership and inclusive approach to community, which is why she decided to apply for the job of Country Manager.

What’s different about Shanta, according to Seinne Lai, is that they are not service providers. Other organizations will build the well, construct the school or open the medical clinic. The Shanta Foundation, however, helps the village learn how to do those things for themselves.

“It really is that analogy of ‘Give you a fish or teach you how (to fish?),’” Meininger added.

There is a saying in Myanmar that one can only see to the end of their eyelash. That’s because every day is about survival.

It’s difficult for villagers to envision a long-term goal, six years down the road, when lasting the day is in question.

It’s one of the first obstacles the men and women working for the Shanta Foundation face when they arrive in a new village. But, over the years, they’ve figured out a way to overcome that obstacle – a community bank.

Meininger explained the community bank does several things. It gives villagers an opportunity to immediately start borrowing money at a low rate of interest, and it’s a way to build equity in the community.

“An investment in the beginning gives people some immediate action, while teaching them those long-term leadership and community development skills that we know they need,” she said.

The Shanta Foundation matches the initial seed money to get things going. After that, when someone takes out a loan to build a school or a water tank, the interest they pay on that loan goes back into the community as an investment in the next project. Seinne Lai shared a story of a farmer from one of the villages who – because of the community bank – was able to hold onto his produce until the market price was better.

In times past, he would have had to sell it for any price because he was stuck in the day-to-day cycle of survival. But with financial support from the community bank, he was able to take the long view and see that he could earn more by waiting.

A seat at the table

When Shanta first partners with any village, it creates a leadership team called the Village Development Team. And about one third of the team’s members must be women.

Traditionally, in a village meeting in Myanmar, the men will sit in the front row, while the women sit in the back, Seinne Lai explained. It’s a cultural norm that exists at every level – the village, the community and the family.

So, for some of the women who join the development team, it’s the first time they’ve ever been asked to be leaders in their communities.

“No one tells them they can be,” Nge Nge added. “They don’t know they can be.”

Unlike some of the women they meet, both Seinne Lai and Nge Nge were raised to know they can be leaders. Their families championed education and taught them to believe in themselves.

Nge Nge never thought there was a difference between men and women, she said. If a man could do it, so could she.

Seinne Lai said her father always told her she could do anything. “I was brought up as a strong girl by my father,” she explained. He would tell her, “Even though no one trusts you, I trust you.”

“That inspired me a lot,” she added.

It’s a lesson she now models for her own daughter – and a lot of other women, including Meininger.

For almost two decades, Meininger worked as a diplomat in countries around the world before retiring and returning to Durango.

“For me it’s that chance to support – as best I can – these amazing women who are as genuine as you can get and whose work is making a difference.” 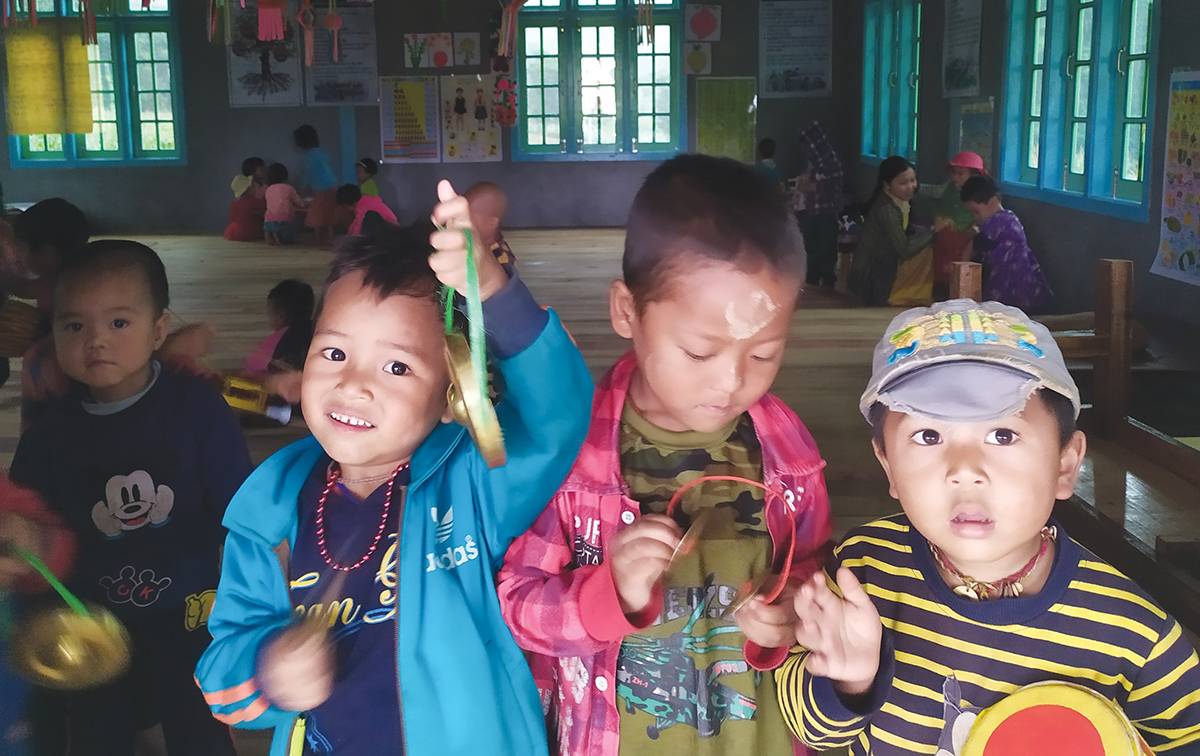 Young children in Pin Mi Kone village learn to play music in their new preschool. Education is one of the Shanta Foundation’s program focus areas. Last year, the nonprofit invested almost 40 percent of its funding into education programs. The other focus areas are healthcare, livelihood, leadership, women’s empowerment and infrastructure./Courtesy photo 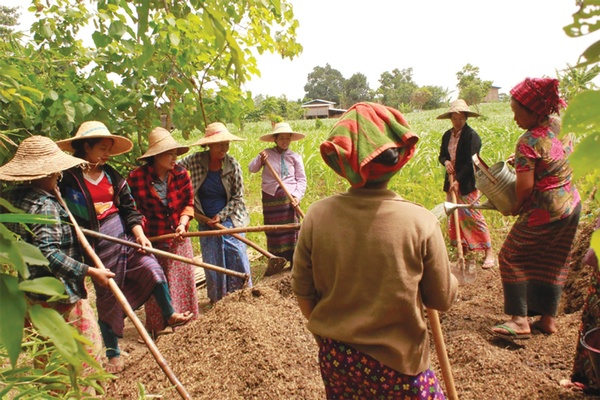 What can you do?

Over the past 13 years, the Shanta Foundation has helped more than 12,000 people take their first steps on a path out of poverty. Last year alone, the organization held dental clinics for more than 1,300 children from 16 different villages; helped establish school libraries in five communities reaching 486 students; and supported the building of new water systems that now provide clean water to more than 800 people.

This is all done with hard work and generous donations. If you want to help the Shanta Foundation do even more, visit www.shantafoundation.org. Learn more about the people, the country and how to donate.