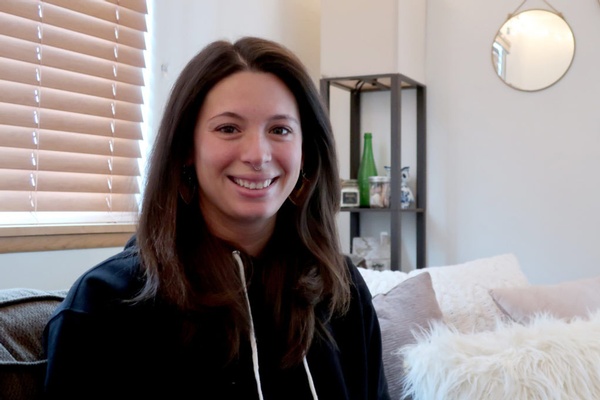 Alexis Zito poses in her Breckenridge apartment on Feb. 4. Zito was able to obtain affordable health coverage through Peak Health Alliance after being uninsured for about a year./ Photo by Natalia Navarro

Health care costs in Summit County are among the highest in the country. Glenn Brady and his three daughters know well the struggles that follow those high costs. Brady has boxes and boxes of medical bills stacked next to his desk that he still has to pay off. They are all from his late wife’s cancer treatments.

“We didn’t have time the last few months to worry about ‘is this in-network or out of network?’” he said. “It was just, like, ‘let’s try this new thing to see if it can extend her life or push the cancer back.’

A couple of years ago, a group of Summit County residents had enough. So, they started a nonprofit working to lower costs: the Peak Health Alliance.

When Brady reached out to Peak Health Alliance in October, he was paying $1,800 a month for health insurance. One phone call later, his monthly premium was $800 lower.

“When I first heard about Peak Health Alliance, I was kind of skeptical,” he said. “I feel bad now because they delivered. Everything that they said was exactly, dead-to-rights, true.”

Brady said that money now can go toward dentist appointments and dance and ski lessons for his 10, 12 and 14 year old girls.

“(Money) just flies out the window as fast as it comes in,” he said. “It goes toward filling up the refrigerator twice a week. I don’t know how my daughters eat that much food, but somehow, it all gets emptied out.”

“We saw families making devastating decisions,” Pogue said. “Families that just couldn’t afford to take their kids to the doctor, and then you see those outcomes play out in school with kids not doing well. It was a crisis for our community, and we were fairly frustrated because we felt the state and the federal government had largely ignored our struggle.”

She commissioned a study that found Summit County residents – some of whom were spending up to 40 percent of their budget on health care – weren’t even getting their care in Summit County. Prices were so high, it forced many people to drive to Denver for medical care.

“The idea is bringing health care back locally. When folks can afford their health care locally, that is the very best outcome,” Pogue said.

Peak Health is an insurance-purchasing alliance. That means it brings all stakeholders – insurance companies, employers, hospitals, therapists, doctors and people – to the table to negotiate prices.

“We have conversations with the hospitals and the providers about what we can do to lower the cost,” Pogue said.

Health-care costs are particularly high in Summit County because it’s driven by a tourist economy that has to support extreme and often dangerous sports. There is also little competition between providers and insurance companies, Pogue said.

On top of all that, this part of the state also has the highest uninsured rate in Colorado. So, the first step of lowering costs is getting everyone insured.

Alexis Zito has worked up to five jobs in Breckenridge to make ends meet. She works two right now, but neither of them provides health insurance.

“I do snowboard, and I do extreme activities,” she said. “In the back of my head, I kept saying, ‘If I fall, if I break something, I’m going to be in such serious debt. My life’s going to be over.’”

The same idea is on the mind of lawmakers across the state. The governor’s office is working on a state-supported public option.

As local programs like the Peak Health Alliance pop up across Colorado, the puzzle of health care in the state gets more pieces.

“The community-purchasing alliances are one piece of this sort of jigsaw puzzle that policymakers are trying to put together,” Allie Morgan with the nonprofit policy think tank Colorado Health Institute said. “They are at a local level as opposed to a state level, so that complicates it a little bit, figuring out how this is going to combine or not with state-level policy changes. “

So far, it seems the purchasing model combines well with the statewide reinsurance program. But it’s unclear whether they would end up competing against a public option for the same small group of people in the market for individual insurance.

Right now, Peak Health Alliance only serves Summit County, but they are planning to expand to rural communities across the state.

However, the model has met resistance elsewhere. The Durango-based Southwest Health Alliance formed last year with the intent of replicating Peak in Southwest Colorado. The Alliance, headed up by the Local First Foundation, was in negotiations with Mercy Regional Medical Center to come up with a pricing structure. However, Centura Health, Mercy’s parent company, suddenly backed out of negotiations late last month, saying it was coming up with its own pricing plan that would save customers as much as 20 percent.

Officials from Centura, the largest health-care provider in Colorado, defended the decision by saying there was no single solution that worked for all Colorado communities. Local members of the SW Health Alliance, however, are stunned by the move but have vowed to move forward with plans, whether Mercy is involved or not.

“We are extremely disappointed in this response because Centura’s plan cuts the community out of health care entirely,” Monique DiGiorgio, executive director of the Local First Foundation, said at the time. “Centura is undercutting the community through back-door deals with insurance carriers.”

According to Pogue, Centura’s decision is just symptomatic of a bigger problem: an industry resistant to change and innovation.