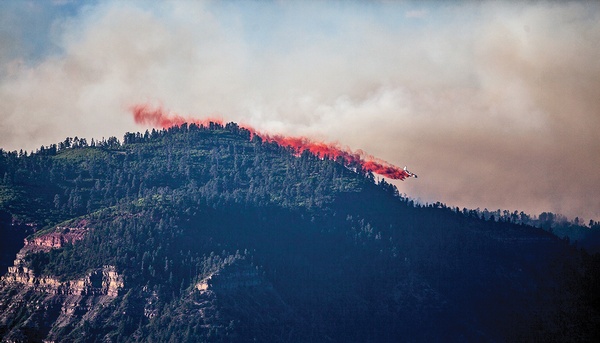 A plane drops slurry on a ridge during 2018's 416 Fire, which ultimately torched 54,000 acres of national forest north of Durango. After a year of investigations, the Forest Service determined a cinder from one of the D&SNGRR's engines sparked the fire and sued the railroad's parent company for $25M in firefighting costs. The train attempted to have the case dismissed, but a judge ruled last week that the Forest Service can continue with trying to recoup its costs./File photo

Missy Votel - 06/11/2020
The U.S. Forest Service may proceed full steam ahead with its $25 million lawsuit against the Durango and Silverton Narrow Gauge Railroad.
On June 1, U. S. District Judge Robert E. Blackburn agreed with a magistrate judge’s earlier decision that the railroad’s parent company, American Heritage Railways, must face the federal government’s effort to recoup its costs in fighting the 416 Fire. The blaze, which the Forest Service determined was sparked by a cinder from a D&SNG engine on June 1, 2018, torched 54,000 acres north of Durango.
In his decision, Blackburn praised U.S. Magistrate Judge N. Reid Neureiter’s “yeoman-like work” in interpreting a 19th-century state law that allows property owners to recoup costs from fires started by railroads. According to the judges, American Heritage is liable not just for physical damages from the fire but suppression costs, as well.
After more than a year of investigations, the U.S. Attorney’s Office, serving as the legal arm of the Forest Service, filed a civil lawsuit against the train July 2, 2019, seeking $25 million in fire-fighting and rehabilitation costs.
However, American Heritage filed a motion in District Court last September to dismiss the case on the grounds that the Colorado law doesn't define damages and limits harm to destroyed property and not suppression costs.
Blackburn, who is the judge overseeing the case, asked Magistrate Neureiter to weigh in on the law and offer guidance. Neureiter delivered his decision in late December 2019, which sided with the Forest Service that the train, indeed, was liable.
“I reject the (D&SNG’s) argument that … the United States is not entitled to recover fire suppression costs,” he wrote. “The entire purpose of this strict liability statute was to shift the unavoidable cost of fires started by coal-burning trains to the railroads who run the trains. It would be nonsensical … to not include the expense of fire suppression as part of the damages.”
And last week, Blackburn agreed with Neureiter’s judgement. In his decision, Blackburn wrote that the intent of the law was to shift liability for fires caused by railroad companies from property owners to the companies themselves. In addition, history showed that the wording of the law was intended only to prevent property owners from involving their insurance companies in claims.
"While this addition certainly was favorable to railroads in so far as it limited the common law right of subrogation, there was no apparent consideration given to limiting the type or amount of damages that could be sought," Blackburn wrote.
He added that the federal government is a landowner like any other, able to sue for damages to "make the injured party whole," including for money spent to put out the fire.
An attorney for the railroad declined to comment.