Land Desk: When discourse derails
After Silverton bans Pledge of Allegiance, a little civility might go a long way 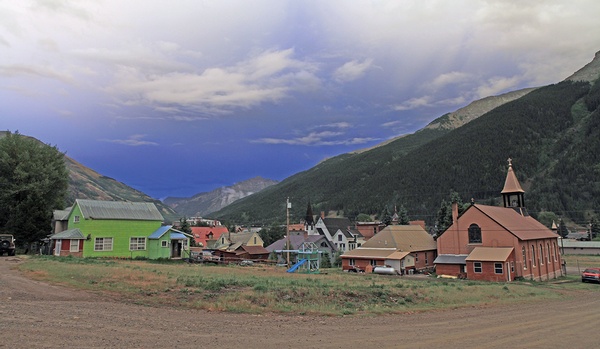 Twenty-five years ago this spring, I rolled into the small mountain town of Silverton to be the reporter-photographer at the weekly newspaper. The sky was gray, the place was quiet, and the streets somehow managed to be both muddy and dusty at the same time. It was awesome.

The mining industry had abandoned the region several years earlier, and the community was still smarting, economically. Enrollment at the school was dropping. The tourism industry did pretty well from July 4 to Labor Day but was virtually nonexistent for the remaining nine months. Year-round work was hard to come by and the wages generally low. My pay was $275/week, or less than $5 an hour, but in a town where rents were below $300 a month and for a $100,000 you could get a castle – with a foundation, even – it was enough to get by.

There was also a great little coffee shop, The Avalanche. Wiley Carmack, an outspoken, rabid conservative known for his vitriolic letters to the editor, held court there almost every morning, alongside a handful of others who leaned leftward politically. The shop was tiny and on cold days – which is to say, always – was shoulder to shoulder with a diverse mix of folks getting jacked up on coffee. That inevitably led to spirited discussions about politics, which inevitably led to outright screaming matches. I’m pretty sure Wiley called me a pinko commie idiot at least once, and I probably had some choice words for him, too.

Town Board meetings were often just as raucous, and joint town-county budget meetings resembled a multi-badger cage fight. In Silverton, politics are a blood-sport, sometimes literally.

But once the meetings or caffeine-addled debates ended, something else always took hold, something like community. Bitter adversaries would sit side by side at the Miners Tavern without killing each other. Wiley came to our potlucks, and we went to his Christmas party. Yeah, he got a little mad when we drank his high-shelf liquor, but we were still friends. The 400 or so year-round residents were like a big, quarrelsome, dysfunctional family. Maybe we didn’t always like each other, but in the end, we had one another’s backs, just like the people working underground in the mines.

I am sure that this spirit still exists in Silverton, but judging by the latest fracas, it has worn rather thin and has been tainted by the same anger and meanness that seems to have infected our nation as a whole.

The ruckus over the Pledge is just the most visible manifestation of a battle that’s been building in Silverton for years, a sort of political/social Gold King Mine blowout, if you will. It began back in 2014, when the town voted to allow off-highway vehicles to ply select streets, creating an enforcement nightmare along with a situation in which some residents were subjected daily to the off-roader roar and dust, while others were not. The tension flared up in 2017 when community members tried to re-ban OHVs, and then again when Shane Fuhrman ran for mayor last year.

During the campaign, Fuhrman’s critics portrayed him as a wealthy, big-city outsider who was intent on turning Silverton into the next Aspen or Telluride. Originally from Evergreen, Fuhrman – an attorney and businessman – moved to Silverton from Brooklyn a decade ago and bought the historic Wyman Hotel. Judging by social media bile, Fuhrman’s big crime was to update the hotel to a mid-century modern style, which turns out to be more attractive to the clientele of Silverton Mountain Ski Area than the faux-Victorian decor found in other local lodging establishments.

He won the election, nonetheless, and began the thankless and virtually unpaid job as the town’s mayor. Along with dealing with a pandemic and then the flood of tourists that followed, Fuhrman and his fellow trustees also explored the idea of expanding the small, town-owned ski area onto surrounding BLM land to give a boost to the winter economy. They also wanted to add a riverside path, trails, a bike park and other amenities. That further fueled the become-another-Aspen fears. (Interestingly, the fact that Silverton Mountain operates a heli-skiing operation out of the Aspen airport, ferrying the wealthy to the mountains around Silverton for $17,990 a pop, doesn’t seem to elicit the same reaction.)

But Silverton doesn’t need to become Aspen to have some of the same problems. Despite its grunginess and lack of a major ski resort, airport or reliable high-speed internet, the town has fallen victim to the housing affordability crisis that has pervaded nearly every corner of the West. In that respect, things have changed dramatically since I arrived in Silverton so many years ago.

As the Silverton newspaper guy from 1996-2006, I attended literally hundreds of community meetings I can’t recall ever hearing anyone recite the Pledge at any of these meetings. Even in the wake of 9/11, when American jingoism oozed across the land, there was no Pledge at meetings. And I’m sure I would have noticed because I would have chosen to sit quietly and respectfully during the Pledge. This is not because I hate America – I don’t – but because I don’t appreciate the “under God” part added during the McCarthy era. And the “liberty and justice for all” part is aspirational only, with little progress being made to realize that, so the Pledge rings false.

Several years ago, for whatever reason, the Town Board decided to break with tradition and open meetings with the Pledge. One town trustee opted to sit the Pledge out, which in 2018 sent one townsperson into a blustery rage, but otherwise drew little notice. After he was elected, Fuhrman, too, chose not to say the Pledge during Zoom meetings and, later, at in-person meetings.

Again, it went by without much fanfare, except from a Qanon-esque, conspiracy-laden, anonymous blog known as the Silverton Porcupine, which went online early this year to “disrupt … childish, cartoonist agendas.” The author regularly refers to COVID-19 as “a plandemic of control and enslavement by ruling elite masters” and bashes local health officials for trying to keep the community, well, healthy. In another post from early this year, the Porcupine notes that during a Zoom meeting, some town trustees turned off their cameras when the Pledge was said. But far more egregious, the Porcupine goes on to claim, was that Interim Town Administrator Anthony Edwards, by pledging to a gold-fringed American flag, was actually declaring loyalty to the British.

Once upon a time, you could write this off as simple batshit craziness. But in these days of demagoguery and public officials inciting mobs to violence, not so much.

In May, the Silverton Town Board of Trustees voted 4-3 to ban OHVs from town streets. The pro-OHV crowd was lathered into a rage, once again threatening to boycott anti-OHV businesses and the whole stinking town, for that matter. If anyone dared stick their neck out on social media to thank the trustees for actually doing something about the OHV problem, they were attacked. While all four trustees were blasted for the decision, Fuhrman – perhaps because he’s the mayor or an easy target – drew most of the ire. Once again, he was pilloried for being an East Coaster trying to overrun the town, with his most vocal critic being, well, an East Coaster.

The Pledge hadn’t yet figured into the discussion. Then, just as the OHV-related fire was blowing up, one of Fuhrman’s online detractors threw gasoline on the flames by bringing up the fact that Fuhrman did not stand for the Pledge before meetings.

This not only riled up the angry so-called patriots and flag-fetishists, but it also gave the OHV crowd more fodder for conflating a love of America with the unfettered combustion of fossil fuels. Fuhrman and friends, by restricting OHVs and refusing to say the Pledge, were thus doubly un-American. Social media erupted with threats, anger and multiple calls for Fuhrman to go to: a) China; b) Russia; c) back to his own country to ride camels (whatever the f*&# that means). Some folks called him a socialist (the Pledge of Allegiance was written by a socialist minister); others claimed he was disrupting a tradition that dates back to 1885 (the pledge wasn’t written until 1892 and was not recited at Silverton meetings until recently). Outside social media, Fuhrman was threatened directly and personally – a victim, one might say, of cancel culture, simply for quietly exercising his First Amendment rights.

And so, he made the decision to stop the recitation of the Pledge at the beginning of Town Board meetings, apparently in the hopes of defusing tension. Whoops. And when some meeting audience members stood to say it nonetheless, he shut them down, telling them he would eject them if they did it again. That didn’t help matters.

Now the hateful McCarthy-esque rhetoric has blown up as news of the pledge “ban” spreads far and wide. Even Franklin Graham, the evangelical hypocrite, has gotten into the mix, along with Rep. Lauren Boebert, who seems to think that asking people not to disrupt a Town Board meeting by belting out the Pledge is more of an assault on the nation than hundreds of insurgents invading the U.S. Capitol.

I’ve never met Fuhrman. But I have read what he has to say about Silverton, about the ski area expansion, and about being bullied, and it seems he has the community’s best interests in mind. Like all public officials, he deserves to have his feet held to the fire. But even if he doesn’t quite “get” Silverton, neither he nor anyone else deserves to be treated with such anger and hate, whether they’re from Brooklyn or Butte, whether they belt out the Pledge or sit silently, whether they decorate their property gaudily or with impeccable taste.

I do know some of the people who have been attacked virtually or directly for their stance on OHVs, the ski area or simply for being associated with Fuhrman, and others who have been caught in the crossfire. They are teachers, public servants, old-timers and newcomers, folks who are devoted to the community where they live, work and raise kids. It’s great to disagree with others and even give them a piece of your mind in a Town Board meeting. But afterwards, you should buy them a beer and thank them for their service, not lambaste or threaten them.

Sadly, Wiley Carmack died recently. If he were still around, I’m sure he would have been right in the thick of this brouhaha. He and I may have shared some harsh words with one another; I suspect he might have even called me a “leftist bug” or a “commie idiot.” But I’m also sure that afterwards, we’d still be able to sit down and drink a cup of coffee together like civil human beings. I do hope the denizens of Silverton one day can do the same.

Jonathan Thompson is a fourth-generation Durangoan who runs the Land Desk, a thrice-weekly newsletter: visit www.landdesk.org. He is also the author of River of Lost Souls, Behind the Slickrock Curtain and the forthcoming Sagebrush Empire.