Land of too many uses?
Forest Service grapples with grazing, wildlife issues 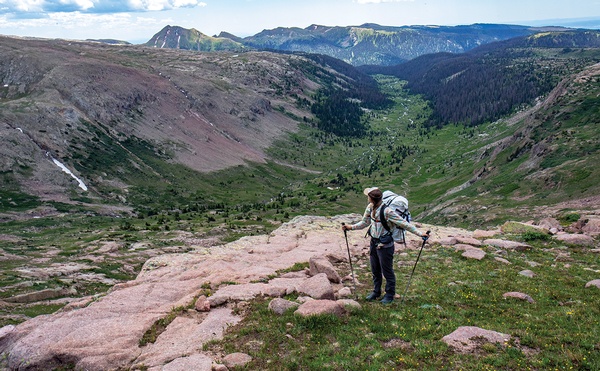 Near Missouri Gulch, in the San Juans one can see a large valley within the Virginia Gulch allotment, part of Ignacio rancher J. Paul Brown's grazing permit in the Weminuche Wilderness./ Photo by Stephen Eginoire

With bighorn populations struggling to survive in Southwest Colorado, what’s taking the U.S. Forest Service so long to come down on a final decision on domestic sheep grazing in the Weminuche Wilderness?

For years, bighorn herds in this part of the state have been stagnant or declining, a result of a number of factors including habitat loss, drought, herd isolation, as well as the overall impacts of change climate, to name a few.

But the most obvious reason, researchers say, is a bacterial disease – known as Mycoplasma ovipneumoniae, or M.ovi – that can only be given to bighorns by domestic sheep, usually when they are grazing the high country. Tests have subsequently confirmed the presence of the disease in bighorn herds.

So when it was time in 2012 to re-evaluate the grazing permits for one of the largest sheepherders in the region – Ignacio rancher J. Paul Brown – wildlife agencies and many conservation groups felt it was time to start phasing out sheep from the landscape.

In 2016, a Forest Service analysis of Brown’s permit clearly drew a connection between the domestic sheep and the disease in bighorns. But by 2018, the Forest Service threw out the study and postponed a final decision in order to “collect more data.” Over the past five years, substantial efforts have been made to further prove the risk sheep pose in bighorn territory, despite evidence elsewhere in the West.

As it stands, the Forest Service says staffing issues and other projects with higher priority have delayed a final decision. James Simino, Columbine District ranger for the San Juan National Forest, said it likely won’t be until at least late 2022 that the agency can resume the process, and from there, there’s no telling when a decision will be made.

All of this at a time when bighorn numbers are falling dangerously low.

‘The science is there’

For more than 50 years, Brown and his family has led sheep from his ranch in Ignacio to graze the high country of the Weminuche Wilderness, Colorado’s largest wilderness area.

All told, Brown’s permit allowed for about 5,200 sheep. And all the while, he maintains bighorns do not interact with his herd. “I’ve never seen a bighorn on our allotments,” Brown said. “And we still haven’t seen any.”

If bighorns, known for wandering long distances, come into contact with domestic sheep, they can contract the deadly bacteria, which can cause pneumonia and respiratory disease, and be fatal. Worse, an infected bighorn can bring the bacteria back to its herd, resulting in widespread die-off and reducing the survival rate of lambs for years to come.

It appears this is exactly what’s happening to the herd in the Weminuche near and around Brown’s grazing allotments, said Jamin Grigg, senior wildlife biologist for Colorado Parks and Wildlife.

After evaluating the landscape and determining the size of bighorn population it can support, CPW set an objective of about 400 on the low end and 920 on the high end. In 2010, the herd was about 460 bighorns and has since declined to about 400, primarily due to stagnant reproductive numbers.

“A lot of the herds in this area have been exposed,” Grigg said. “The science is there. We can’t directly attribute that to interaction with sheep, but we know interactions occur, and we know the risks involved with interactions.”

The Forest Service’s first analysis, known as an Environmental Impact Statement, also drew this conclusion in the 2016 review of Brown’s permit, and it appeared the agency was set to reduce sheep grazing in the high country.

But ultimately, the agency backtracked and said it needed more data to support any decisions. Dan Parkinson, with Backcountry Hunters & Anglers, said the move was likely a result of pressure from the wool industry as well as other ranchers who depend on public lands.

“(The Forest Service) has the data, but they are in a tough spot politically,” Parkinson said.

The only recourse, however, was to go back to the drawing board and collect more data. CPW, for its part, started to put GPS collars on bighorns to track their movements, on top of an already years-long effort to monitor herds by helicopter. And, Mountain Studies Institute in 2018 launched an ongoing citizen science effort that encouraged recreationists to help document bighorns and domestic sheep in the backcountry.

Brad Weinmeister, a biologist for CPW, said more than 40 animals were collared. Despite challenges with GPS equipment and a small sample size of animals, there was one major takeaway: bighorns like to move. “It demonstrated these sheep are moving outside their herds, covering great distances,” he said. “They’re going out exploring, and coming back to the herd. It’s what you expect.”

CPW submitted its final report to the Forest Service » in September, Weinmeister said, which only drove home the already-known fact bighorns in the Weminuche could be moving into allotment areas and returning to their herds with a potentially deadly bacteria.

Separation of wild and tame

The Forest Service said it was unable to grant a phone interview since it was first contacted for this story Oct. 28. However, in an email, Simino said a large amount of staff turnover in the past few years has made it challenging to complete the sheep grazing analysis. He added the project likely wouldn’t be picked back up until October 2022.

“There are too many things outside of my control within that process to give an accurate completion date,” Simino wrote.

On top of the local Forest Service showing the clear risks domestic sheep pose to bighorns, what’s also frustrating is that science and situations across the West have come to the same conclusion, said Terry Meyers with the Rocky Mountain Bighorn Society.

One of the most significant instances was in 2010, when the 9th U.S. Circuit Court of Appeals upheld the Payette National Forest Service’s decision in Idaho to phase out active sheep permits because of the risk of disease transmission. Also in 2010, a massive study from 23 different U.S. and Canadian wildlife agencies recommended 9 miles of separation between the two animals, nowhere near the buffer in the San Juans.

“Practical solutions will be difficult, if not impossible to achieve until the risk of disease transmission from domestic sheep to wild sheep is acknowledged by those responsible for wildlife and agricultural management,” CPW wrote in a 2012 report.

This mountain of evidence, Meyers said, makes it so confounding why the San Juan National Forest has waited almost a decade now on the Weminuche decision, as bighorns continue to suffer.

“The Forest Service already knows it’s a risk,” Meyers said. “But there’s a lot of pressure for them to continue grazing, and they are loathe to close an active allotment. There would be a lot of blow back and I think they decided to find a way to delay making that decision a little longer.”

Only so much room to roam

The stranglehold domestic sheep have on the backcountry also prohibits bighorns from living in their historic range and intermingling with other wild herds. While it’s generally thought bighorns live in the high alpine, more and more studies prove they use all different kinds of terrain. CPW, for instance, estimated bighorns occupy just 15% to 35% of their historic range.

“The habitat they use is not as specific as we thought,” said Weinmeister, adding some collared bighorns traveled 20 miles a day, sometimes in snow.

Having livestock over critical parts of the landscape also prohibits transplant projects to increase the number and health of wild herds, which CPW has done across the state where grazing has been phased out. “It’s too dangerous with domestic sheep on the landscape,” Grigg said.

Part of the complicated, interconnected puzzle is north of Silverton, where far more sheep graze. In August, the Bureau of Land Management proposed reauthorizing more than 65,000 acres of land. The pending decision, critics say, keeps the door open for bighorns to run into livestock. But it also continues the risk of stray domestic sheep that escape the pack to run into bighorns.

Disease aside, when bighorns come into contact with domestic sheep, it’s the bighorns that come out on the losing end. CPW has a mandate that any bighorn known to encounter a sheep must be euthanized to prevent it from going back to its wild herd and infecting other wild animals. Seven bighorns have been killed in the Southwest region since 2016, CPW said.

“It’s highly likely there are contacts happening we’re not able to document. We just don’t have the resources to do that, nor do federal agencies,” Grigg said. “It’s a disappointing situation, but it’s also the most responsible decision to remove the risk of a die off.”

Sticking up for wildlife

In 2020, Brown took a buyout that effectively gave up one of his high-risk allotments, reducing his range by 11,000 acres and herd by about 800 sheep. But still, Brown has about 40,000 acres to graze, and said the recent high prices of lamb has made the venture more profitable, despite the reduced number of sheep. Brown has also moved cattle onto lands where sheep once roamed.

“Its worked out pretty well,” Brown said. “There’s been good demand for lamb, and not as many lambs because a lot of people have gotten out, West-wide.”

In his late 60s, Brown said he has no imminent plans of retirement. But when the time comes, his son will take over. And grazing on public lands is essential to the operation, with grazing costs about $2 per five sheep a month compared to about $20/month on private land. Even with low costs, grazing in the San Juans has dropped dramatically from about 200,000 livestock in 1920 to just 6,100 sheep nowadays.

But bighorns have declined, too.

By the early 1900s, only a small number of native sheep remained in Colorado, decimated by hunting, disease and habitat loss. Since then, a decades-long effort to restore the species has resulted in a population estimated at 7,000 statewide. Now, about 2,000 bighorns roam the Southwest.

Parkinson, with Colorado Backcountry Hunters and Anglers, said it’s time to start sticking up for these herds and reduce range overlap.

“My gosh it’s been almost 10 years now, and it’s just one delay after another, and bighorns remain still very much at risk on the Weminuche,” he said. “Everyone knows it’s a political hot potato, but at some point, scientists in the organization need to say the data and science is abundantly clear that the risk is coming from domestic sheep.”

Editor's note: A previous version of this story incorrectly said the 65,000 acres of land north of Silverton was leased by Montrose rancher Ernie Etchart. The land in question is leased by different ranchers.