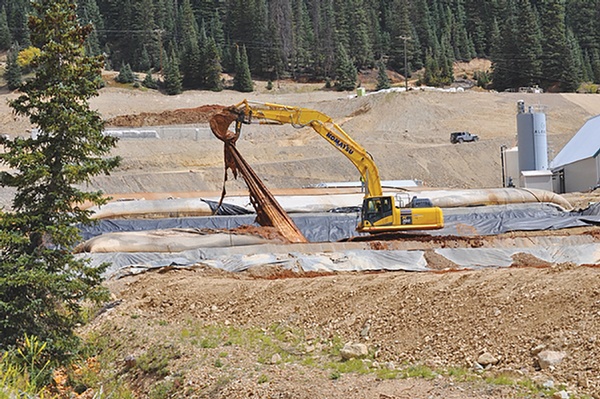 Legislators have yet again introduced a bill aimed at removing legal obstacles for so-called "good Samaritan" groups cleaning up abandoned mine sites, such as the dozens that litter the San Juan. But some environmental groups say such bills don't go far enough and let mining companies off the hook too easily./File photo

With the U.S. legislative season winding down, lawmakers from Colorado have made a last-ditch effort to re-introduce an old friend.

Republicans Rep. Scott Tipton and Sen. Cory Gardner introduced the Good Samaritan Remediation of Orphan Hardrock Mines Act of 2018 last week. The bill, the latest in at least a dozen iterations over the years, seeks to shield environmental and stewardship groups, so-called “good Samaritans,” from legal liability when it comes to cleaning up abandoned mines littering the West. However, unlike the ghosts of Samaritan bills past, this act has a slight twist. It would operate as a pilot program, administered by the Environmental Protection Agency, and identify 15 sites for cleanup.

“The Good Samaritan Remediation of Orphan Hardrock Mines Act of 2018 will set up a pilot project to allow good Samaritans to clean up abandoned mine sites, improving water quality and providing our communities with a valuable service, all while maintaining strong permitting and environmental controls,” Rep. Tipton said in a statement.

As area residents are well aware, particularly after the 2015 Gold King Mine spill, abandoned mines pose a serious threat to the environment as well as the economy and recreation. With some 500,000 abandoned mines across the country, including dozens in the San Juans alone, it is simply not feasible for the federal government to administer all the clean up. This is where good Samaritan groups could step in to help. However, most are dissuaded because assuming a clean up opens them up to getting sued under the Comprehensive Environmental Response, Compensation and Liability Act (CERCLA) and the Clean Water Act.

Tipton and Gardner’s new bill would allow “qualifying” good Samaritans to clean up without the fear of assuming liability.

“The Gold King Mine spill was a reminder felt across the Third Congressional District and State of Colorado that when it comes to cleaning up abandoned mine sites, the status quo is unacceptable,” said Tipton. “There are many good Samaritan groups that have the technical expertise,  financial ability and desire to conduct successful remediation at abandoned mines, but they are discouraged from taking on projects due to current regulations.”

At least one potential good Samaritan group, Trout Unlimited, has given the bill its blessing. “Abandoned mines represent the single greatest and least addressed threat to our nation’s waters,” Chris Wood, President and CEO of Trout Unlimited, said. “We look forward to working with anyone who wants to make our waters cleaner and our lands healthier and build strong, bipartisan support to pass good Samaritan legislation.”

“Legacy mine sites have remained abandoned for decades or centuries,” Hal Quinn, NMA’s President and CEO, said. “These bills are vital to clearing the obstacles that are impeding remediation. Good Samaritans should be supported in their efforts to clean up these sites without fear of incurring additional legal liability. This is common-sense legislation that Congress has discussed for years. Now is the time for action.”

However, the bill is not without its detractors. Some environmental groups argue that change should come with an overhaul of the antiquated 1872 Mining Law, which they say lets mining companies off the hook for remediation. Specifically, these groups would like to see some kind of funding mechanism set up whereby mining companies pay into abandoned mine cleanup. Furthermore, they add, the problem is simply too massive for well-meaning but financially illequipped nonprofit groups.

“The real solution to the problem is reform of the 1872 Mining Law, complete with a dedicated funding mechanism designed specifically to pay for the cleanup,” Lauren Pagel, Policy Director of Earthworks, said in a statement. “The American West is littered with abandoned mines that shackle taxpayers with an Environmental Protection Agency-estimated $50 billion in costs. Good Samaritans, no matter their intentions, lack the resources to dent a problem of this scale. And this bill does nothing to address disasters like Gold King.”

So far, the bill has yet to attract a Democratic sponsor – namely Sen. Michael Bennet, who worked with Gardner on a similar bill in 2016. Although the session is waning and the bill will likely die yet another quiet death, Bennet has left the door open to compromise in the new year.

“Abandoned mines across Colorado and the West need to be cleaned up,” he told The Colorado Sun. “We are willing to work with anyone to pass good Samaritan legislation with appropriate environmental safeguards. We have a strong history of working together in our delegation and have made a lot of progress on a bipartisan and comprehensive solution to address this issue. We should restart the conversation in that spirit.”

Gardner and Tipton’s bill would bar any mining companies from working on sites they previously owned or operated. It would, however, allow those companies to clean up other abandoned mines. It also bars “re-mining,” resuming mining at a site that’s already been cleaned up.