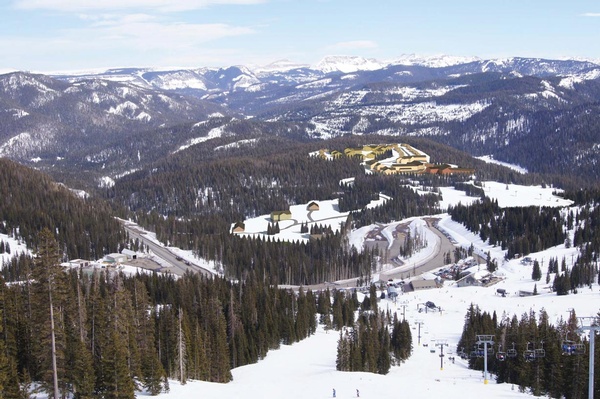 Opponents to the Village at Wolf Creek, illustrated above, won a major battle last month after a U.S. District Court judge ruled that, in granting Red McCombs his land swap, the Forest Service failed to consider environmental impacts. According to the Village's website, construction was slated to start last year. It is unclear when that will now happen./Courtesy photo

On one side of the courtroom sat lawyers for a coalition of conservation and environmental groups, including Rocky Mountain Wild, San Luis Valley Ecosystem Council, Wilderness Workshop and the Durango-based San Juan Citizens Alliance.

On the other side were representatives of the U.S. Forest Service, U.S. Fish and Wildlife Service and Leavell-McCombs Joint Venture, the development company behind the proposed Village at Wolf Creek.

As the judge listened to their arguments and asked his questions, those inside the courtroom said they couldn’t tell which way he was leaning.

Although he seemed to understand the plaintiffs’ concerns – like a lack of public input or attention to the environmental impacts of the project – they had been in this fight for more than 30 years and had come to never expect anything.

So, when Judge Richard P. Matsch, a senior judge in the U.S. District Court in Colorado, announced his decision May 17 in a 40-page order, the celebrations began.

Matsch concluded the Forest Service’s official Record of Decision, which would have opened the door for the Village at Wolf Creek’s developers to start construction, was “unlawful,” and he overturned it.

That Record of Decision, or ROD, essentially approved a second land swap between McCombs and the Forest Service, giving the Texas investor the go-ahead to develop land along Highway 160 and create the entrance to his resort-style village.

Matsch wrote, “Before taking any major action, a federal agency must stop and take a careful look to determine the environmental impact of that decision, and listen to the public before taking action. The Forest Service failed to do that.” Jimbo Buickerood, public lands coordinator for the San Juan Citizens Alliance, one of the plaintiffs in the case, was in the courtroom for the oral arguments. He said he felt Matsch understood their struggle to include public input in the Forest Service’s decision, and that weighed on his mind. “He was very much hearing the people,” Buickerood said, “and, their take on the environment.”

Not only did the judge specifically mention the 900 public comments on the Village received by the Forest Service, he actually bolded the section in his decision where he addressed the lack of public input and environmental review in the original 1987 land swap.

“Sometimes the natural environment doesn’t get its day in court, unless the people speak up,” Buickerood said.

One thing really stood out in Matsch’s decision for Travis Stills, an Energy and Conservation Law attorney who represented the plaintiffs in the case. It was in the last couple pages where Matsch went beyond the legal opinion, Stills said.

He stepped away from legalese and spoke to a wider audience – as if he were addressing the public, rather than the lawyers. “That’s unusual,” Stills added.

Matsch wrote, “For reasons not knowable from this record, the Forest Service in 1986 decided to accept a land exchange to provide a developer with 420 acres adjacent to the Wolf Creek Ski Area ... for the purpose of building a ski resort.

“Public awareness of the fragility of the natural environment has greatly increased in the intervening 30 years and the need for a scientifically based analysis ... is imperative in explaining the (Forest Service’s) decision to the public.”

In the short term, Matsch’s order means the plaintiffs can celebrate, and McComb’s plans for the Village at Wolf Creek are at a standstill. In the long term, no one’s certain what might happen.

Stills said the Forest Service, Fish and Wildlife, or developers could appeal the decision. He feels, however, the court order is sound and leaves little room for appeal.

Lawrence Lujan, press officer for the U.S. Forest Service’s Rocky Mountain Region, said they are “evaluating the court’s ruling and have no further comment at this time.”

Stills is hopeful this decision is the start of a new chapter, not a repeat of the last 30 years. The battle began three decades ago when the U.S. Forest Service first approved a land swap between Texas billionaire BJ “Red”

McCombs and the federal agency, giving McCombs several hundred acres near the base of the Wolf Creek Ski Area for more than a thousand acres buried deep within the Rio Grande National Forest.

However, along with the land swap, the Forest Service also approved the development of a resort with a hotel, condos and all the amenities. Mineral County, where the private lands sit, was to decide the details, and they approved plans for more than 2,000 residential units, 500,000 square feet of commercial space and enough room for 10,000 people.

“The exchange decision was made on a ‘Finding of No Significant Impact’ on the natural environment, so no Environmental Impact Statement was prepared and no public participation was required,” the judge’s decision reads.

Over the next three decades, McCombs’ company, Leavell-McCombs Joint Venture, has been attempting to build the Village.

Although the original land swap did not allow for public comment, a later review of the project and its impact on the surrounding environment did. During this public input period in 2012, more than 900 comments were submitted.

But, the Environmental Impact Statement as well as the official responses to those comments were both prepared by a third party hired by McCombs. According to the judge’s decision, “They would not be expected to find (their) work to be flawed.”

Since the original land swap in 1987, those who oppose the Village felt the Forest Service has allowed political pressure to outweigh the need to protect the environment and wildlife. And, the judge seemed to agree. “There appears to be a predictive bias in the Forest Service,” he wrote, “to make the outcome consistent with the 1987 decision that a ski resort complementing the Wolf Creek Ski Area would be in the public interest, even though that decision was made without benefit of an environmental impact

statement or public participation.” Working on behalf of Rocky Mountain Wild, Stills still has one more case, a Freedom of Information Act request, pending before the 10th Circuit.

What they are asking for are the records from that third-party contractor hired by McCombs, which prepared the 2012 Environmental Impact Statement and responded to the public comment.

He said that case is likely to get a hearing this year and may reveal quite a bit of information about what’s really going on.

At this point, Stills thinks most people are looking at Matsch’s decision as the next stage in this battle. He’d like to see the Forest Service step back and consider other options when it comes to McCombs and his land.

“Hopefully, (developers) will hear not only the judge, but the public comments and search for another solution,” he said. 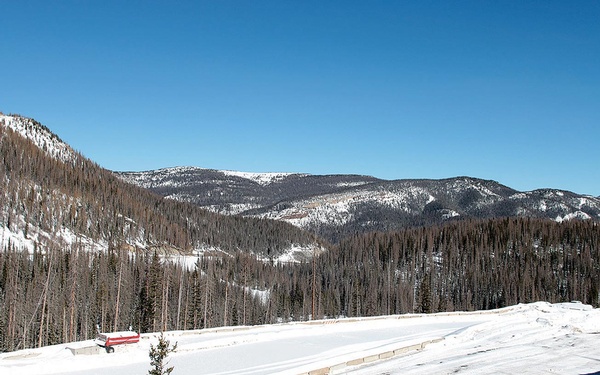 An empty parking lot at Wolf Creek Ski Area. The proposed Village at Wolf Creek would have added as many as 10,000 people adjacent to the ski area. However, the development was dealt a blow from a U.S. District Court judge who concluded the Forest Service did not take a careful look at the environmental impacts of the development./ Photo by Jennaye Derge

From the front lines

For more from the San Juan Citizens Alliance, check out their website at www.sanjuancitizens.org.