Lighting the way
LPEA members, directors examine the role of renewable energy in its future 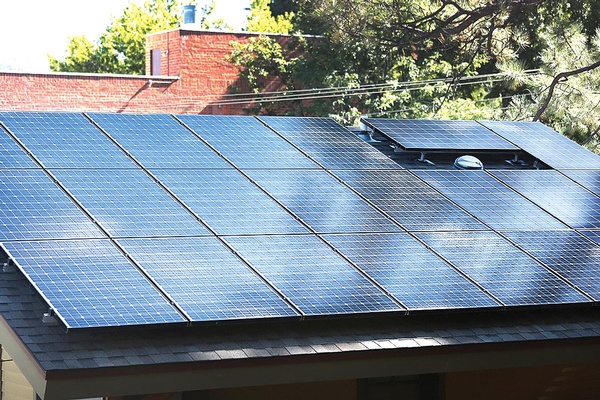 home in downtown Durango is covered in solar panels. The reasons locals install solar panels on their homes, can vary. For some it's a way to combat climate change. For others, it's a way to save money or to achieve energy independence and keep money in the local economy. LPEA recently voted to increase the amount of renewables it uses, but Tri-State denied the request for at least two years./Photo by Jennaye Derge

Members and directors alike have different ideas on the role of renewable energy in La Plata Electric Association’s future. For some, it is the future. For others, it’s just one piece of the puzzle. Then there are those who see renewable energy sources as some-thing more – a way to keep it local.

A common Durango catchphrase is “Local first,” and some residents think the same should apply to energy.

Local First, the Durango nonprofit at the heart of all things local, is working with other organizations, like the San Juan Citizens Alliance and the Sustainability Alliance of Southwest Colorado, to keep energy production here in the area, just like any other product.

“We have an opportunity to support local businesses like solar companies in La Plata,” Monique DiGiorgio, managing director at Local First, said.

It’s more than simply going green or trying to produce more clean energy. The idea is to keep the energy production – and the money – in the area.

“I’m very much in favor of that,” Guinn Unger, a member of LPEA’s Board of Directors, said. “Keep the money here.”

However, Unger feels that being required to buy 95 percent of LPEA’s power from their wholesale energy provider Tri-State Generation and Transmission – something that’s required under LPEA’s current contract – is an impediment to increasing local, renewable energy.

The co-op would like to change that number to 90 percent, getting the other 10 percent from renewables.

The LPEA Board of Directors voted to try and expand the cap on renewables before the LPEA elections this past May. The vote was almost unanimous – former Director Joe Wheeling recused himself because he was a committee member on the Tri-State board.

Wheeling lost his bid for re-election, and following the loss, LPEA board member Kohler McInnis was chosen to take his place on the Tri-State committee. During the committee’s most recent meeting, the issue of reviewing LPEA’s

contract was discussed. It’s one of the first steps to expanding the cap on renewables.

McInnis asked the other members to review LPEA’s contract next year, instead of waiting five years, the typical time frame for review under Tri-State’s bylaws.

The committee did not approve the request, even McInnis did not, and the committee instead voted to review the contract in two years. Some back home in LPEA’s coverage area felt McInnis voted against them and didn’t do enough for LPEA and its members.

Mike Dreyspring, CEO La Plata Electric Association, was also present at the committee meeting and said he felt McInnis did speak up for the co-op and progress was made, referring to the two-year timeframe.

The real challenge for LPEA isn’t convincing Tri-State, but Tri-State’s 42 other members that increasing the renewable cap from 5 to 10 percent is in everyone’s best interest.

Following the original vote from the LPEA board, Dreyspring put together a “white paper” – an official report about increasing the renewable cap from 5 to 10 percent.

Part of what he attempted to do in his white paper is explain to the other members of Tri-State how and why they wouldn’t be subsidizing, or paying for, LPEA’s increase in renewable energy.

One thing that helps LPEA keep costs down for all its members, while increasing its renewable portfolio, are subsidies. Tri-State has policies addressing incentives, subsidies and the cost of renewable and traditional energy sources.

The developer of a solar farm or hydropower facility, for example, needs to charge a certain rate for that power in order to keep the proverbial lights on. However, Tri-State or even LPEA may not be willing or able to pay those rates.

The difference between what the developer needs and what Tri-State can pay is often covered by subsidies or incentives. That difference could also be paid by LPEA members.

Dreyspring said Tri-State is not preventing the co-op from moving forward with local renewables, the hurdle is more of an economic one.

While some co-op members have commented to Dreyspring that they are willing to pay more for renewable energy, not everyone under the LPEA umbrella actually can. “That’s the other voice that we’re hearing,” he said.

The energy industry is changing dramatically. Whether it’s the way energy is produced, distributed, used or regulated, the only constant is change.

Dreyspring has stated on multiple occasions that the industry used to plan ahead 10 or 20 years. In today’s world, however, the outlook is only three to five years out.

Those changes are not attributed to one source, but there’s no denying a part of it is the influx of renewables. For the first time, energy is something that can be created much closer to home.

“It used to be, 20 years ago, the most efficient way was to have larger plants 100 miles away,” Unger said. “What solar allows you to do is to generate the electricity much closer to where it’s going to be used.”

Currently, that facility accounts for about 4 percent of LPEA’s renewable allowance under its contract with Tri-State. Other contributors include hydroelectric generation facilities, community solar gardens, excess net metering (which is the extra power produced by residential solar installations), and the most recent addition, a 1,000 kWh solar plant near Oxford built by the Southern Ute Indian Tribe.

Together, they make up about 5 percent of LPEA’s renewable energy mix – meaning LPEA is essentially tapped out. Unger believes it’s possible to see a little further out in

the future than three to five years, and wants LPEA’s board to do just that.

He plans to present his fellow members with some studies on the issue at a committee meeting Sept. 18.

While Unger makes his case to the other directors and Local First works to support local energy companies, LPEA staff continues to make their case to Tri-State’s other members – that expanding the percentage of allowed renewables from 5 to 10 percent would benefit everyone.

The complex issues surrounding renewables – their cost and future role – will be topic of discussion in a series of LPEA meetings in September, which offers another way for members to get into the green.

The first is an LPEA Committee Meeting, when Unger will make his presentation, at 9 a.m. Monday, Sept. 18, at the coop’s headquarters in Bodo Park. The next day Dan Harms, LPEA’s manager of rates, technology and energy policy, will present a Renewable Energy Workshop on the Economics of Renewables from 5:30-7:30 p.m. Tuesday, Sept. 19, also at the Bodo Park offices. Lastly, the LPEA Board of Directors will host its regular board meeting at 9 a.m. Wednesday, Sept. 20, at the LPEA offices in Pagosa Springs. All three events are open to the public, giving members the chance to hear and be heard.

What: Renewable Energy Workshop on Economics
When: Tuesday, Sept. 19, 5:30-7:30 p.m.
Where: LPEA headquarters in Bodo Park

What: Board of Directors monthly meeting
When: Wednesday, Sept. 20, 9 a.m.
Where: Ross Aragon Community Center in Pagosa Springs (the meeting location was prescheduled in an effort to reach its members in the surrounding area)

The first is the Local Renewables Fund, to which any of the co-op’s members can contribute. In the beginning, the funds were used to install solar panels on area schools and libraries. Mosy recently, it’s been used to finance projects for low-income residents who don’t typically have access to renewables.

When asked if those funds could be used to subsidize renewable projects and fill the gap between what the developers of a local, renewable project needs and what Tri-State is willing to pay, LPEA CEO Mike Dreyspring said, “It could be.”

The second program is the Green Power Accounts, in which members can buy blocks of renewable energy. The cost is an extra 9 cents for every 100 kilowatt-hour block. The kicker is that the energy comes from one of Tri-State’s renewable programs, not a local source. Tri-State’s renewable resources include a new wind farm in Eastern Colorado, and solar farms in Colorado and New Mexico. At this point, more than a quarter of Tri-State’s energy comes from renewables. Just being renewable, however, isn’t the driving factor for everyone. Dreyspring said typically there are three main drivers for members who are looking to go solar: climate change, economics and independence. For more on the programs, check LPEA’s website at www.lpea.coop.