Lions in the midst
Expert to speak, lead outing on better understanding these quiet kings of the wild 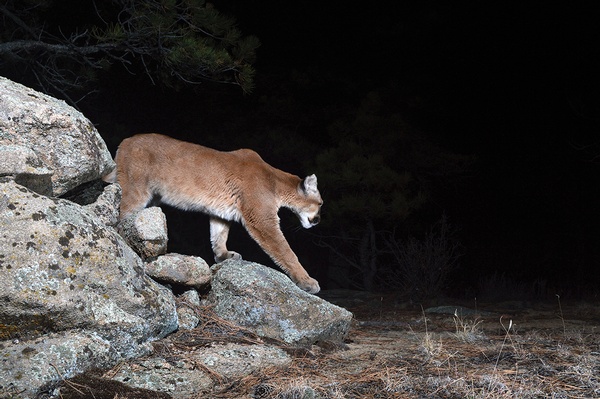 As one of the most feared wild predators, mountain lions are also among the least understood. However, mountain lion expert and lifetime outdoorsman David Neils wants to change that.

Neils will be in Durango this Thurs. and Fri., May 9-10, for presentations on the secretive and elusive cats, their habits and where best to spot – or not spot – them. His talks, which will feature some of the more than 800 videos he’s shot via trail cam near his home outside Rocky Mountain National Park, take place from 6:30 – 8 p.m. both nights at the Durango Public Library. Originally just slated for Thursday night, the Friday night show was added due to popular demand.

There will also be a tracking field trip Friday morning in Horse Gulch. The event was organized by BearSmart Durango after executive director Bryan Peterson saw one of Neils’ videos online.

“We’re not getting in the mountain lion business, but we thought this was really important, what with happened in Fort Collins,” Peterson said, referring to the trail runner who fended off a juvenile cat last year with his bare hands. “(Neils) is just one of those guys whose spent a lot of time out there, and he’s figured out how to find them. I think people are going to have a real treat seeing these videos.”

Wait – “treat?” Shouldn’t we cower in fear and shake in our running shoes at the sight of these kings of the food chain?

According to Neils – and many other experts – the answer is a resounding no. Or at least, not really.

“The risk of being attacked by a mountain lion is about one in 35 million. But your chances of dying from cancer or heart disease is one in seven,” Neils said Tuesday from his home in Loveland. “If you spend time living in mountain lion country, you’ll live longer!” (He’s actually had the slogan printed on T-shirts.)

As for the (very) rare human-lion encounter, Neils said avoiding them is something as simple as changing one’s habits. “You don’t want to be out riding or running alone at dawn or dusk,” he said. “Basically, when you’re out there, you want to look like a human.”

That’s because mountain lions eat deer – not humans – unless, of course, you happen to be doing your best deer impersonation.

And while this is something we’ve all been told repeatedly by wildlife experts over and over, it’s something Neils has experienced – and lived to talk about – firsthand.

About 14 years ago, he was bow-hunting in the Never Summers, in northern Colorado, along the Wyoming border. He laid down to take a nap in a sunny meadow and had the strangest dream about a curious mountain lion coming up and bumping his face, kind of like a kiss with a big, wet hand.

Except, it wasn’t a dream. “I sat up and it ran off behind me, and I realized right away what it was,” he said. “I had lion slobber on my check ... and there were 4-inch paw prints in the dirt.”

But instead of running off like a crazed banshee, this vet-

eran of the woods, who grew up in western Montana and worked for several years as a forester, was kitten smitten.

“I became fascinated. I had a mountain lion encounter and survived,” he said.

Neils went home and began fashioning crude homemade trail video cameras and setting them up in order to catch the reclusive cats doing whatever it is they do. At first, his luck was hit or miss – catching a big cat maybe once every six to eight weeks. But like the wily hunters themselves, he soon began to hone in on their hangouts. “Now, I catch them on video every three or four days,” he said.

For Neils, who goes out three times a week, 52 weeks a year to set up cameras, it’s important not to disturb the cats or be an intrusion on their lives. Typically, he sets the cameras up in an inconspicuous spot and then leaves, checking them remotely via his phone. Sometimes, though, he goes home only to discover he had company.

“I once set up a camera and 60 seconds later, the video shows a cat coming out of the bushes to investigate,” he said.

It is this side of the misunderstood animals that Neils hopes to convey to audiences, especially those who live in lion country (which probably applies to every one of you reading this.) Live in awe and reverence, yes – not fear.

“I love teaching people about these amazing apex predators,” he said. “For me, it’s helping people move from being exposed in nature to being engaged with nature. It’s a wonderful journey.”

For Neils, that journey included coming to understand

that big cats, once thought to be unpredictable, actually are the opposite. In fact, if you’ll pardon the pun, they are quite the creatures of habit.

In his time studying the cats, Neils has learned to pinpoint, with uncanny precision, where the cats congregate. According to him, there are four factors that play into prime lion habitat: prevailing wind direction (cats rely on their scent to hunt, and scent is carried by the wind); topographic pinch points; edges (i.e. meadows bordered by forest, allowing for stealthy hiding); and water access, or lack thereof.

This may come as no surprise, but Durango and surrounding environs, particularly the area west of Falls Creek, is prime lion habitat, Neils said.

But, again, the purpose of this is not to incite cat hysteria or ruin property values. The purpose is to teach people about these magnificent felines in our midst, who – no offense – really want nothing to do with you. To co-exist, sim“cat”ico, if you will.

“Hysteria comes from a lack of knowledge. We fear what we don’t know,” he said. “But anytime there’s a bear, mountain lion or wolf problem, it’s almost always a human problem. There are so many little things we can do to live successfully with wildlife.”

Neils’ talk and field trip are free, but space is limited for both. For more information or to sign up for the Horse Gulch field trip, visit www.BearSmartDurango.org. To check out some of Neil’s amazing footage, go to www.wildnaturemedia.com. The event is co-hosted by Trails 2000, Seniors Outdoors! and the Living With Wildlife Advisory Board of La Plata County.