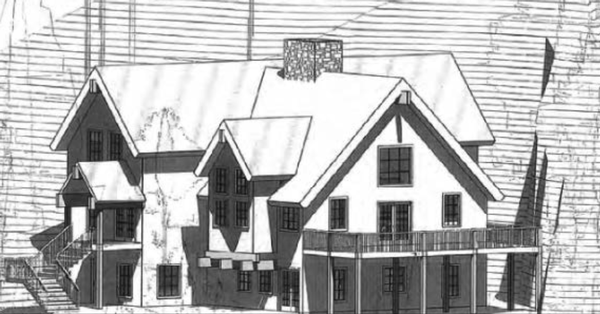 An artistic rendering of the planned B&B at Gladstone. The New York developers expect the seven-bedroom lodge to be built over the next few years.

Developers have gotten the green light to mine the white gold around Silverton.

On Tues., Jan. 21, the San Juan Regional Planning Commission gave an enthusiastic thumbs up to a $3 million, year-round bed and breakfast lodge near Gladstone, according to a report in the Silverton Standard. Located on two mining claims off County Road 110, the lodge is about a mile and a half from Silverton Mountain.

“It looks like a great project,” Planning Commission Chairman Ken Safranski said, adding that it was a “really thorough” land-use application. The Planning Commission approved the lodge’s sketch plan in a unanimous vote, with seven conditions, including use of natural materials, secure communications and a satisfactory parking arrangement.

The lodge is being developed by Nick Croce and Vincent Guben and their company, C&G Alpine Partners LLC, based in Setauket, N.Y. They own the Hidden Treasure Lode and Wild Cat Lode mining claims – a total of 18.1 acres – about a mile south of Gladstone.

Croce said engineering on the building, which will be built into the hillside, is still being finalized, but he expects a 5,000 - 6,000-square-foot, three-story structure with a total footprint of about 2,300 square feet. It will be able to accommodate about 16 guests at a time.

“We’re going to try to design this to minimize the exterior footprint. We have a really good builder and engineering team,” Croce told the commission.

The lodge will probably have seven bedrooms, a mix of bunk and private rooms. He also said while the lodge will certainly cater to skiers, he envisions a four-season, year-round lodge. “For sure in the wintertime this lodge will attract skiers,” Croce said. “But I think in the summer it will be just as big a draw for hikers and mountain bikers or just to experience the amazing town of Silverton.”

According to Eric Nelson, of Summit Engineering of Durango, which prepared the project application, the owners have done “a ton of due diligence.” They first eyed a property at Ophir Pass for the lodge, but abandoned it due to avalanche risk and access issues. They settled on the current location because it offers year-round access, on-grid power, and is in the “economic corridor,” close to trails and town.

In response to planners concerns, Nelson said the lodge will be designed appropriately with a “historic mining feel,” including natural materials, wood and stone. “We hope to blend it into the environment as best we can,” he said.

In addition, although avalanche risk was found to be low, the owners intend to keep three weeks of provisions on hand in case the road is closed by avalanches. They also intend to have a radio link and satellite Internet link, a sprinkler system and 10,000 gallons of water on hand.

Construction is expected to take at least two build seasons. “It’s been a dream of mine for a while now,” Croce said. “I’ve always had Silverton on my radar. This is the right place and right time to do it.”

“Elk management plans are revised approximately every 10 years,” Matt Thorpe, area wildlife manager in Durango, said. “Public input provides guidance to wildlife managers who attempt to balance the biological capabilities of the herd and its habitat with the public’s demand for wildlife recreation opportunities. These herd management plans drive important decisions, which include the license-setting process as well as strategies and techniques to reach herd population objectives.”

Colorado Parks and Wildlife staff members will talk about current status of elk herds, history of the herds and the herd management planning process. CPW wants to hear from local hunters and others interested in wildlife about how they’d like to see elk managed.

At the meetings, wildlife managers will also discuss the new regulation that limits archery elk hunting licenses in this area of Southwest Colorado.

CPW is also asking those interested in elk management in Southwest Colorado to take an online survey that will be available Feb. 4 on CPW’s web site: cpw.state.co.us/ thingstodo/Pages/HerdManagementPlans.aspx