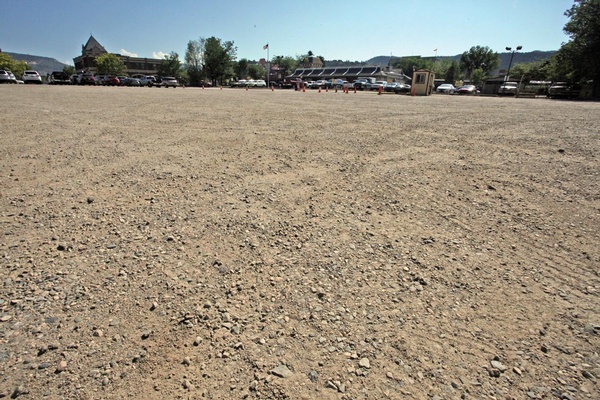 The gravel parking lot at the corner of Camino del Rio and College Drive sits empty on a Wednesday morning. The lot, which looks onto McDonald's in the background, is the proposed site for a new parking garage and Arts and Events Center covering more than 53,000-square-feet./Photo by Steve Eginoire

The arrival of the summer monsoon season is dampening the 416 Fire, allowing everyone to get back outside, Purgatory Resort to reopen, and the train to get back on track. But, the city is still suffering from the hit to the local economy.

It may not seem like the best time to come out with plans for a new performing arts center, but according to Tim Walsworth, executive director for the Business Improvement District, the timing could be ideal.

Walsworth and others from the Durango Arts, Conference and Event Center working group presented their ideas for a new performing arts and conference center to a packed room at a Durango City Council meeting Tuesday evening.

The center is being proposed for City-owned property at the corner of Camino del Rio and College Drive, now the home to a parking lot. Walsworth was joined by local residents Bud and Fran Franks from Franks & Associates – a nationally recognized consulting firm for civic and cultural projects.

“We’d like to request the city become a partner in the project,” Walsworth said at the meeting.

Councilors Dick White and Melissa Youssef, and Mayor Sweetie Marbury thanked the group’s representatives for their work and presentation, but declined to discuss the issue Tuesday evening.

Although the Council’s reaction was muted, the crowd closed the meeting with a round of applause.

Bud Franks said the Council’s response wasn’t that unusual – and he would know.

“This is how it typically goes,” Franks said. “There’s a lot on the city’s plate right now.”

With the 416 Fire shutting down some of the area’s biggest tourist attractions – the national forest, train and Purgatory – right after the start of the summer tourist season, local businesses and city officials are bracing for a tough financial hit.

But these are exactly the kinds of hits Walsworth thinks a new arts and events center can help alleviate.

For the past couple of years, according to Walsworth, the city’s sales tax revenue has been relatively flat – an indicator that Durango may have maxed out its ability to attract larger events and more visitors.

“That means we can’t keep doing the same things,” he added.

One sector the city currently doesn’t have the ability to tap into is what’s called the meeting industry, which includes large conferences.

According to Bud Franks, the meeting industry has been thriving over the past decade, growing 23 percent from 2009-16.

Some examples of conferences Durango missed the boat on are the Colorado Municipal League’s and the Colorado City County Managers Association’s annual conferences. Both these statewide organizations have reportedly expressed interest in the past in coming here, but Durango is unable to host events of that size.

The proposed center, however, would be able to host such events, something that could

not only help Durango break through its current revenue plateau but also weather any unexpected storms – or lack thereof.

“It adds to Durango’s cultural and community life,” Walsworth said. “And it would add in a significant way.”

The group estimates the project would bring about $1 million in additional tax revenue for the city each year – and that’s a conservative number, according to the group. It would also add hundreds of jobs, both in construction and operation.

The consumer spending directly related to the use of the facility – like hotel rooms and renting the facilities – is estimated at $15 million. The indirect spending – including shopping along Main Avenue, eating at restaurants or even returning for a vacation – could balloon the local economy another $21 million.

In addition to any financial benefits, the proposed project could tick off one of Durango’s longstanding ambitions: a downtown parking garage.

Currently, the parking lot on the corner of Camino del Rio and College Drive can hold about 300 cars and is designated for customers of the Durango & Silverton Narrow Gauge Railroad. The proposed garage would not only be open to anyone visiting downtown, it could hold 450 cars and be designed to accommodate large RVs.

Talk of a new performing arts center has been on the local wish list almost as long as the downtown parking garage – which is to say, for decades.

The most recent idea came in the form of the STEAM Park, which the Frankses also consulted on. The STEAM Park (aka Science, Theatre, Education, Art and Music Park) was a community project proposed in 2015 for the riverfront area that currently encompasses River City Hall, the downtown Fire Station and Powerhouse Science Center. Some of the stumbling blocks for the project were concerns with parking, existing facilities on the property and funding.

As for the first two issues, this new venture would address parking first with the garage, and the lot being considered is devoid of structures, so basically a blank slate.

As for funding, construction for the garage is estimated at $9-$11 million, and the Arts and Events Center is $25- $36 million. Funding would likely be a mix of public and private sources, including grants, lodgers taxes, bonding and other capital campaigns.

Bud Franks said the group looked at a number of sites for the project, all of which were accessible to downtown amenities – including the 800 block of E. 2nd Avenue and parking lots located between the Strater Hotel and Denny’s restaurant.

What makes the gravel parking lot currently used by the train so attractive are the advantages it brings to the budget. The majority of the property is owned by the City. So, if the Council chose to partner with the group, it wouldn’t have to buy the land. With the lot being void of current facilities, they also wouldn’t have to spend additional funds on demolition – another cost savings up front.

A small portion of the property in question is owned by the Durango & Silverton Narrow Gauge Railroad. Franks and Walsworth have had a couple meetings with owner Al Harper, who they say would also need to be a

partner for this to work.
“We all need to be partners,” Franks explained.

If the city decides to move forward with the project and partner with the group, it would take about 12-18 months to complete the design and another 18-24 months for construction. The first structure to go up would be the parking garage, followed by the center and associated facilities.

Now, the working group and its supporters await the Council’s response. “The ball’s in the city’s court,” Walsworth said. “(But) we don’t want to let it sit for a year.” 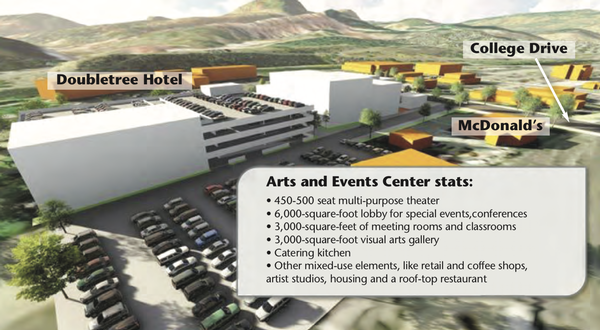