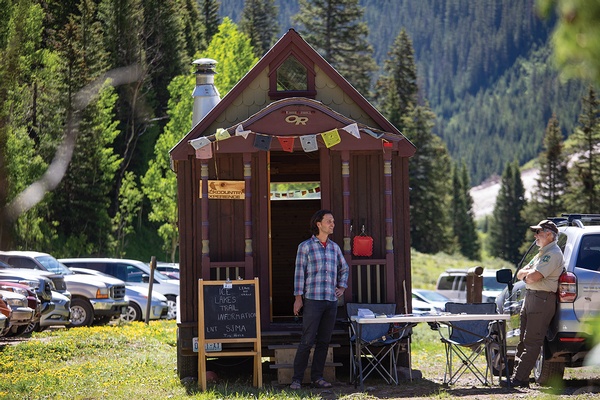 With its dazzling tourmaline blue waters, soaring peaks and riotous wildflowers, it’s easy to see why Ice Lakes Basin is the stuff of Instagram dreams. But in the last several years, this hidden gem west of Silverton has befallen a fate similar to that of other postcard-worthy places around the state, and the world. I guess you could say, it’s gone viral.

“Even as much as eight years ago, we starting seeing a significant increase in hikers but not what we see today,” Jed Botsford, recreational program lead for the San Juan National Forest Columbine Ranger District, said last week. “On weekends, the parking is maxed out, people are parked even where we have ‘no parking’ signs.”

Botsford said as many as 100 people (and their canine companions) make the 9.2-mile roundtrip trek to the upper Ice Lakes Basin on weekend days. And while some may have heard about the hike via word of mouth, many more found out via a simple swipe of the thumb.

“A large amount of day hikers go there to see the blue Ice Lake they’re seeing on social media,” he said.

He admits this is not a problem isolated to his corner of the San Juans. “It’s probably pretty standard for a lot of places in the world,” he said. “There’s a whole bunch of these places that are super beautiful.”

Nevertheless, the increased visitation creates a problem for land managers no matter where they are. Botsford said many of the folks who attempt the strenuous hike are ill-prepared for the mountainous journey, without proper clothing, rain gear, footwear or food and water.

“The elevation gain to Ice Lake is more than the Empire State Building,” he noted. “A lot of these people are inexperienced hikers who want to see this beautiful place and have no knowledge how to do it.”

Not only does the increased visitation create a safety risk, but it also leads to increased wear and tear on the trail as well as resource damage from folks unversed in Leave No Trace practices.

“With more use, there’s more trail maintenance, and more people short-cutting switchbacks,” he said. But the trail isn’t the only feature to suffer from increased usage. Campers create headaches of their own, especially in the upper basin above treeline where they camp in plain view of others or on the shores of the lake, build fire rings that scar the land and use the limited vegetation to build fires for those rings. Dog poop is another huge problem as well as the waste from their people, with toilet paper becoming a common sight.

“You can’t really bury it above treeline, so we have t.p. issues,” he said.

And while this land is your land and my land, we can probably all agree discarded toilet paper is not something anyone wants to see littering a pristine high-alpine lake.

“We’re all trying to figure out how to deal with it,” Botsford said. “There are no clear answers.”

Some high-traffic areas, such as the Conundrum Hot Springs between Aspen and Crested Butte have gone to a permit system. Botsford said he has heard from many people saying similar limitations should be put in place for Ice Lakes, or that camping should be limited to the lower basin only, below treeline. But he said this comes with limitations of its own. Over the last several years, he’s seen his staff of rangers dwindle from seven to two due to budget cuts.

“Even if overnight camping was limited to the lower basin, there’s no staff to enforce it,” he said.

Similarly, a plan for voluntary registration for the nearby Weminuche Wilderness a few years earlier also failed due to lack of staff. “It was never put in place,” he said.

One way the Ice Lakes area could see some relief is from the latest attempt to pass the San Juan Mountains Wilderness Act. Such a bill, which would offer greater protections for the San Juans, has been introduced several times over the years to no avail.

The latest iteration was introduced by Sen. Michael Bennett, D-Colo., on Jan 28 and would offer protections for nearly 60,000 acres. The act is part of a larger, statewide public lands bill known as the Colorado Outdoor Recreation and Economy (CORE) Act, which would protect 400,000 acres of Colorado wildlands from energy development and other threats. In the San Juans, the act would expand wilderness in the Sneffels Range, add wilderness around Lizard Head and put less-stringent “special management area” protections for 30,000 acres at Ice Lakes, Hope Lake and Naturita Canyon.

“If the bill passes, then we would need to put a plan in place in accordance with the Special Management Area, but that hasn’t come to fruition,” Botsford said.

However, while the bill awaits the light of day in committee, local land agencies are doing their best to help spread the word about impacts at Ice Lakes. One effort entails a unique collaboration between the Forest Service, San Juan Mountains Association and outdoors gear manufacturer Outdoor Research.

Together, the three are taking a “tiny” approach to the problem, quite literally. Starting July 4, OR’s tiny house began a summer residency at the Ice Lakes trailhead. Known as an “educational basecamp,” the tiny house serves as a stopping off point for hikers looking for information.

“It’s basically a little mountain cabin on wheels,” David Taft, conservation director for SJMA, said. “It has a little kitchen, table with maps, guidebooks and everything you would need to know,” he said.

Taft said he, too, has seen the impacts at Ice Lakes, from overflowing parking lots to braided trails and trampled campsites.

“It’s just incredibly high usage,” said Taft. “With that many people, you’re going to end up with impacts.”

The idea for the tiny house was hatched in 2016 when the SJMA got a grant for Ice Lakes to become a “hot spot” through the Boulder-based Leave No Trace foundation. Over three days that summer, representatives from the organization took note of visitor use patterns and then submitted recommendations on how to better preserve the area.

From those suggestions came the idea of having some sort of temporary structure in place at the trailhead. “We were kicking around ideas and said, ‘why don’t we have a trailer up there?’” Taft recalled.

From there, Ben Rockus, owner of Backcountry Experience, got on board and approached OR about the idea of using their tiny house.

“They loved the idea and offered it for the summer,” Taft said. “That’s how we got this super cool Leave No Trace basecamp.”

The basecamp will be staffed by volunteers for the next two months and open mornings until 3 p.m. each day. The idea is that, in addition to offering information, the volunteers can chat with folks on the tenets of Leave No Trace (i.e. that toilet paper doesn’t just magically blow away in the wind and short-cutting may get you there faster, but it erodes the trail for everyone else.)

Volunteers will also be working on stewardship projects, trail restoration and signage. In addition to the tiny house, Taft said he is also encouraging people to “tag responsibly.” Such efforts have taken hold elsewhere, particularly in Jackson, Wyo., where locals have been very vocal about removing geo-coordinates from their Instagram posts.

“All of a sudden, everyone has the exact GPS coordinates for a place, and it blows up exponentially,” he said.

Of course, all this isn’t to say we should feel guilty about getting out and enjoying the great outdoors. It just means we need to work a little harder to keep them enjoyable and great for others, too.

“I understand it’s about gorgeous turquoise water. I can understand why people want to see it,” said Taft. “The goal is to get people to love these places, that’s the only way they’ll remain protected. But, we can fall into the trap of loving these places to death.” 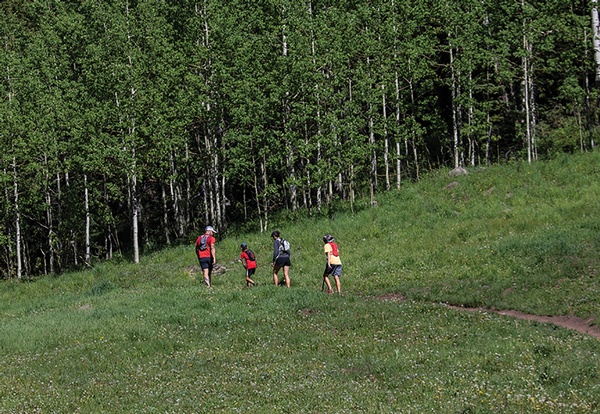 Hikers embark on the Ice Lakes Trail. Some 100 people make the 9.2 mile roundtrip journey to visit the lake's turquoise waters on an average weekend day./ Photo by Stephen Eginoire