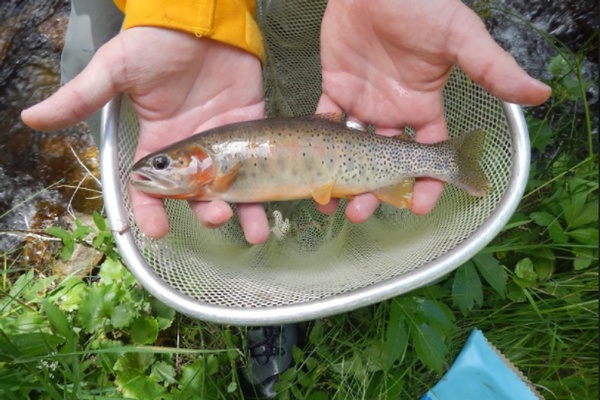 The greenback cutthroat trout is Colorado’s official state fish, but it’s been listed as “threatened” under the Endangered Species Act since 1978. Once thought to be completely extinct, wildlife biologists have been working for decades to help the species rebound.

But last year, CPW reported an 80 percent decline in adult trout populations over a three-year period, a troubling regression after years of progress.

In an attempt to rehabilitate the population, Colorado Parks and Wildlife began what it calls “aggressive” recovery efforts in 2014. That effort is now continuing, with work under way along two creeks in the Roosevelt National Forest in Larimer County.

Greenback trout were previously introduced to George Creek and its tributary, Cornelius Stream, in the early 1980s. However, the fish’s non-native predators – the brook trout and brown trout – have since re-invaded and killed off greenback populations.

Jason Clay, a public information officer for CPW, said the two non-native species have a long history in the state.

“They were brought back many decades ago, really for angling opportunities,” Clay said. “They started from European beginnings and populated out in the East as both a food source and an opportunity for anglers.”

Both brook and brown trout are extremely abundant in Colorado, thanks to high spawn rates and their tendency to out-compete other fish. These trout also prey on smaller fish, like the greenback cutthroat, pushing them out of their habitats. They are also more resistant to the parasite that causes whirling disease, which can kill or massively deform young trout.

CPW closed the area around the two creeks for three days last week as it worked to kill all the brown and brook trout in the streams using a common population-control compound called rotenone. The streams must be left fishless for several years in order for whirling disease parasites to die off. Once tests show an absence of parasites, greenback trout will be reintroduced to the creeks.

CPW is also leading an effort to restore the native San Juan cutthroat trout, previously thought to be extinct, in Southwest Colorado. While numerous streams have been restored over the years, the latest targeted waterway is atop Wolf Creek Pass, in the headwaters of the San Juan River.

This summer, the project will focus on a 3-mile section of stream atop Wolf Creek Pass down to Forest Road 725. Starting Aug. 30, the creek will be closed to the public in this section. No impacts are expected for drivers on Highway 550.

First, wildlife officials will use rotenone, an EPA-registered pescicide, to remove all non-native trout. Rotenone, which kills all fish and aquatic insects, has been used in the state for 80 years, and wildlife officials maintain the chemical is ultimately safe for river health in the long run.

The treated areas, though, will be void of fish until CPW can restock it with natives next summer. Wildlife officials will use a neutralizing agent near the end of the project area, however, so waterways farther downstream are not impacted.

“Restoring native species is a high priority for Colorado Parks and Wildlife,” Jim White, aquatic biologist for CPW, said in a news release. “And Wolf Creek is an ideal location for pure San Juan cutthroat trout.”

The Durango Telegraph added to this CPR report. For more from Colorado Public Radio news, go to: www.cpr.org.?