Making the rounds
Have no fear, Tube Dude is here for your floating needs 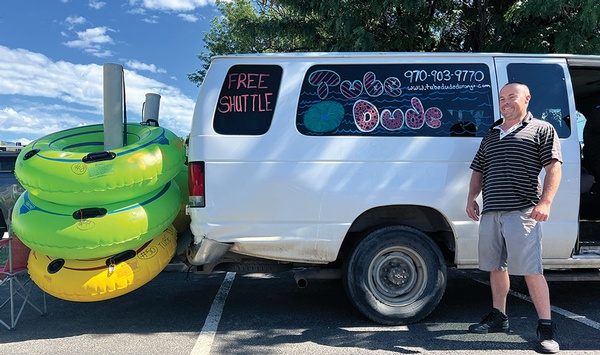 Jeremy Hill, one of the Tube Dudes, won big at a casino and decided to start a rental and shuttle service for floating down the Animas River in Durango./ Photo by Missy Votel

Ever since the first primitive river man set derriere to doughnut hole, he has been faced with a vexing dilemma: how to get back to the put-in. See, while inner tubes are most definitely circular, the river is not, leaving many a tuber to do the soggy walk of shame back to their vehicles at the end of a run.

But, thanks to a few enterprising locals, the chafing, lugging and even pesky inflating is a thing of the past. For the cost of one flip flop (which, by the way, you should never wear on the river), Jeremy Hill, aka the Tube Dude, will not only rent you a tube and PFD, but drop you off at the 29th Street put-in as many times as your waterlogged bum can handle.

“It’s $20 for all day; I’ll take you as many times as you want to go,” said Hill, who co-owns the Tube Dude with Cody Meyers.

(The shuttle is free with tube rental. Hill looked into offering paid shuttles for folks with their own tubes, but that entailed a commercial PUC license from the state, so he went with the tube-rental model instead.)

Tube Dude bases operations out of the parking lot at Priority Rentals, near the Jitters Java kiosk, at 801 Camino del Rio. Tubers can take out at 9th Street and cross the new pedestrian-friendly crossing at 9th and Camino to get back to their cars or, better yet, take another lap.

Hill, who grew up in Pagosa Springs and splits his time between there and Durango, said the seeds of the Tube Dude were planted after talking with a friend who owned Flexible Flyers Rafting.

“He told me he made way more money renting tubes than doing raft trips,” he said.

However, Hill didn’t officially get the uh, tube, rolling until a dalliance with Lady Luck last spring. He won $20,000 at the slot machines over the course of three visits to the Sky Ute Casino in Ignacio.

“The first time I won $14,000, the second time I won $1,600 and the third I won $4,300,” said Hill, who said he doesn’t necessarily consider himself a gambler. For his day job, he spent nine years in lift maintenance at Wolf Creek Ski Area and is one of Durango’s few Uber drivers.

Not wanting to squander his good fortune, he used the proceeds to pay off bills and gave some money to his parents. Then, he sunk the rest of his winnings into the business, buying tubes and life jackets, and procuring a used 10-passenger van, which proved more difficult than imagined.

“It’s really hard to find a van without the seats ripped out, because everyone wants to use them for camper vans,” he said.

Eventually, Hill found a used van in Fort Morgan, drove it back to Durango and opened up shop July 30 in the spot he rents from Priority. After toying with the name Totally Tubular (taken by a shop in Salida, he learned during a trip to FIBArk) and the Tube King (friends advised against it because of unsavory connotations), he settled on the Tube Dude.

“When I came up with Tube Dude, I knew that was the one,” he said.

“So far, it’s been slow,” he said, adding that about half of his business has been locals. “It’s rained every day, and then the river was up, which isn’t great for tubing.”

The first week, he said he didn’t make enough money to pay himself and one of his employees, but he plans to stick it out the rest of this season and be back next summer. After all, he is (sort of) a gambling man by nature.

“We kind of missed the peak season this year,” he said. “We think it’s going to take off next summer.”