Marshall Fire, in context
Redefining the wildland-urban interface and the notion of fire season 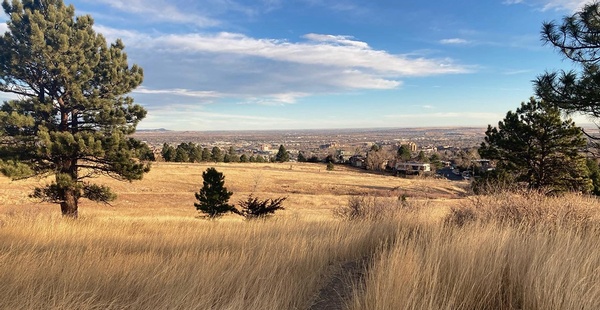 THE NEWS: The fast-moving Marshall Fire tore through suburbs on Colorado’s Front Range on Dec. 30, destroying 991 structures and damaging 127 others. One person died, another remains missing. The source of the fire is still under investigation. Early reports that a downed utility line provided the original spark have been debunked. But there is little question that climate change-induced drought, weather whiplash and warming temperatures set the stage for the wintertime conflagration.

THE CONTEXT: Just six months before the blaze, when Colorado’s fire season normally would be in full swing, starting a grass fire around Boulder would have been a challenge. The region had been doused by heavy, spring snowfall and early summer rains. By late June, drought conditions in eastern Colorado had been completely alleviated, even as nearly all of the remaining West (including the western half of the state) suffered from severe to exceptional drought.

But big rains would prove no match for above-average temperatures all summer long. And when the rain stopped in August, early summer’s thick, tall grasses dried out. By late September, drought had spread across eastern Colorado once again. After making it through the summer virtually fire-free, a blaze broke out near Estes Park at 7,500 feet above sea level, forcing residents to flee. Denver didn’t even get a smidgeon of snowfall until Dec. 10, the latest snowfall on record.

I had been following the Front Range’s journey in and out of drought all year, but I didn’t really understand it until I went on a winter solstice run in south Boulder’s open space. I had dressed appropriately for the season – so I thought – in tights and a thermal top. But as I made my way up toward the Flatirons, it became sweatily clear I had dressed too warmly for the conditions. The mercury would hit 62 degrees that day, and the next, and the day after that. I searched the high slopes in vain for a patch of snow, but saw nothing but beige and brown all around. The grass on either side of the trail was brittle and tinder-dry and, just as alarming, knee-high. A big wind storm the previous week had left ponderosa branches scattered about, and I witnessed several trees that had been toppled by the gusts. I shuddered as I imagined what would happen if someone tossed a cigarette butt into the grass during a wind event. Later that day, my wife, daughter and I drove through the cookie-cutter developments of Superior on our way to somewhere, and I was as baffled by all the new construction – in a place that not so long ago was probably ranch land – as I was by the near total lack of snow on the distant figure of Longs Peak, elevation 14,259 feet.

I was haunted by a sense of uncanniness and seasonal confusion, which was only heightened by my trip Dec. 22 to western Colorado, where the mountains, at least, were blanketed with snow.

Five days later, the Oak Fire broke out west of Denver, burning about 150 acres, shutting down a major highway and forcing evacuations. Three days after that, when wind was gusting up to 100 miles per hour, something sparked the Marshall Fire. I was in Paonia at the time, where snow was piling up, and happened to check the Colorado Department of Transportation site to see if the storm had shut down any highways. You can imagine my shock when I saw that several major arteries outside of Boulder were closed, not by snow but by high winds and fire (McClure Pass near Paonia was closed later that day due to avalanche hazard). The fire raced through the grass into the suburban sprawl of Superior and Louisville, jumping parking lots and strip malls, filling the air with smoke, burning through nearly 1,000 homes and redefining the collective notion of the urban-wildfire interface and wrecking any concept of a fire season that has an end and beginning.

If this event would have occurred a few years earlier, much of the media coverage probably would not have even mentioned climate change. But by the end of 2021, a year that saw all kinds of weather extremes, the verdict was clear and swift. Here’s longtime television meteorologist Mike Nelson: “The terrible firestorm was a result of a very warm, dry period combined with an extreme high wind event. There is a clear connection to CLIMATE CHANGE! TV (meterologists) – especially chiefs and prime weather talent MUST make the connection with their viewers!”

Eerily, just two days before the Marshall Fire, the National Interagency Fire Center posted this. While they don’t explicitly mention climate change, it’s pretty damned clear what they’re talking about. “Fire season has become longer due to conditions like winter snows melting earlier & rain coming later in the fall. A 4-month fire season now lasts 6-8 months. Fires in the winter are becoming part of the norm. This is how fire seasons have evolved into fire years.”

And this from Becky Bolinger, Colorado’s assistant state climatologist: “How many unprecedented events happen before we accept climate change is here? And yes. This is me admitting climate change is playing a role.”

A disaster like this is tragic at any time, but the timing of this one – aside from occurring in the wrong season altogether – was especially bad. Evacuees had to crowd into shelters even as a highly infectious pandemic raged. Hundreds of people lost their homes during a severe housing crunch. Building materials are at a premium due to supply chain issues, and construction workers are in short supply. It could be years before rebuilding even begins.

On New Year’s Eve, a day after the destruction, snow finally fell on Boulder, blanketing the still-smoldering ashes in white.

Jonathan Thompson is a fourth-generation Durangoan who runs the Land Desk, a thrice-weekly newsletter: visit www.landdesk.org. He is also the author of “River of Lost Souls,” “Behind the Slickrock Curtain” and “Sagebrush Empire.”