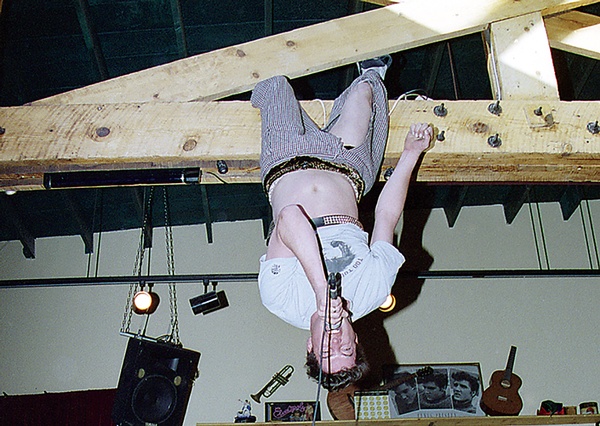 Ah, the good olde days. Mishcker does some acrobatics from the rafters at one of the the original PRB's at Storyville, circa 2002./ File photo

After a postponement in August, the punk wave is set to be served up hot and on plates this upcoming Saturday at Punk Rock Breakfast.

So, you may be asking, what exactly is Punk Rock Breakfast? Well, I worked to uncover the origin story of such an uncanny event. And in the words of one its founders, Paul “Bubba” Iudice: “It’s a horrible idea, and that’s the beauty of it.”

Bubba has been a cornerstone in the alternative music scene throughout the years, fanning the flames of rock in our sleepy little town. He now plays with local heavy-hitters Farmington Hill, which has had great success throughout the region. But Bubba didn’t always play such genre-gapping approachable tunes – he is rooted in punk.

It all started as a Christmas party for Ska Brewing at Storyville, a bar that shut down in August 2004, located at what’s now Taco Libre. Bubba’s memory seems hazy, from what I assume is many-a-Punk Rock Breakfasts, but I asked, “What year did this all kick off?” His immediate response, “F*** dude, I don’t remember. 2000, 2001?”

Paving the way for this now long-standing Durango tradition, Bubba recalls such local and regional bands playing such as Gina Go Faster and The Randibles. For the first few Punk Rock Breakfasts, Bubba himself played with the (now defunct band) The 13’s. And regardless of its sketchy beginnings, Punk Rock Breakfast is still rocking after 20 years of runny eggs, bad attitudes, good times and rock ’n’ roll. “It was so cool to see your friends hung over and haggard from the night before, hanging over a plate of beans and cold eggs in their sleeping attire,” Bubba said.

On Saturday, there’s a stacked bill of amazing shredders set to take the stage. Starting off at 11 a.m. is Acid Wrench, a local newbie on the scene, pumping out classic punk covers and slipping in some originals. Power duo Foul Tom, out of Aztec, slams out sound and catchy riffs that are sure to embed themselves in your ear. Your Bones, a trio guided by lightning solos and thunderous drums, spans many sub-genres of rock. Illegal Aliens, a crew hailing from Santa Fe, has been making waves through the Southwest, and we are honored to have them. Closing the afternoon out is Immediate Family, which likes to snuggle friends and family into a nice comfy groove, and then slam in with driving drums and overdriven hot licks. All these righteous groups will turn your cozy Saturday morning into a time you’ll never forget, full of mosh pits, breakfast burritos, gut-busting solos and a paradoxical tradition that will continue through time as long as there is support and stoke surrounding this writer’s favorite genre, rock ’n’ r­oll.

Over the years, Punk Rock Breakfast has evolved by pulling in bands from outside Durango and pivoting to giving back to the community, with hopes that the town will show more support for rock ’n’ roll. In this upcoming installment of the punk-in-the-morning event, all proceeds will go to two local nonprofits. The first is Compañeros, a grassroots nonprofit immigrant-rights organization that strives to serve and empower residents in the rural Southwest through community organizing, education and bilingual assistance. The second is The Hive, whose mission is to provide an inclusive, safe space for youth and the community by providing creative outlets through art, music and skateboarding.

This event will be hosted by Animas City Theatre and food will be provided by Raider Ridge Cafe. Other contributing sponsors are the Barber and the Bookcase, offering auction items; Ska Brewing, who has donated a keg of beer; and Graphic Assassin, who created the art and flyers for the event. Many other community members have put heart and soul into creating a stellar day of rockin’ tunes, perhaps too many to name here (but we thank you).

You can buy tickets in advance at Animas Trading Co. or animascitytheatre.com for 11 clams, or you can buy tickets at the door for $15. Food will be sold separately, at a cost of $7/burrito. In addition to all these offerings, there will be a silent auction to raise money for the nonprofits. So come get a steamy hot plate of punk at the Animas City Theater and support local punk rock.