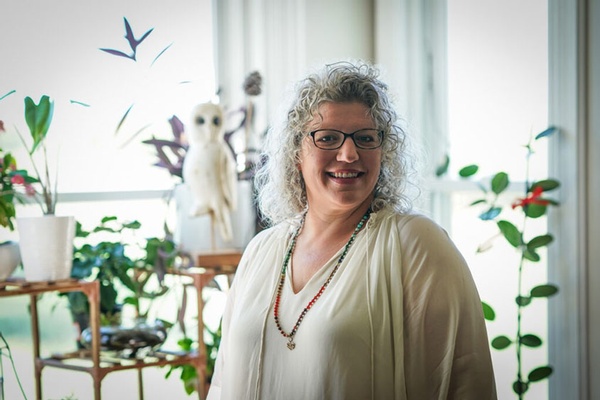 Heather Jackson was having symptoms of PTSD after years of caring for a son who suffers from chronic seizures. Microdosing psilocybin turned her life around, she says./ Hart Van Denburg/CPR News

Heather Jackson calls it the “mother’s wall,” and it comes on very suddenly. She can’t make decisions, like what to cook for dinner. She realizes the kitchen trash is full and starts to go to take it out and then discovers something else needs to be done. She sets the trash bag down, only to discover it eight hours later.

“I can feel the wall coming,” Jackson, a mother of two south of Denver, said. “I need something to rest on.”

That rest comes in the form of a tiny capsule of dried, powdered psilocybin – psychedelic mushrooms.

Jackson, CEO of Unlimited Sciences, a psychedelic research company, is one of perhaps hundreds of mothers in Colorado who has begun a regimen of microdosing to ease the stress and anxiety of being a mother on the go. Some have joined support groups to help them with microdosing. Yet others microdose and do yoga, journal, take a walk with their kids or watch a Disney movie.

“Previously, I was very disconnected from my body. I would actually joke I could have a severed arm and I would still be, like, typing with one hand,” said Jackson, whose youngest son, 19, has special needs and requires round-the-clock care. “Now that I’m very in tune with myself, I see it coming, and I know I need to take a rest.”

Moms who microdose are among the fastest growing groups in the psychedelic movement, according to industry observers and academics studying psilocybin.

Throughout the United States and Canada, clinical trials have shown that larger doses of psilocybin help treat anxiety, depression and trauma. One recent trial showed synthetic psilocybin treated drug-resistant depression as effectively as escitalopram, a common SSRI, according to Scientific American and the New England Journal of Medicine.

Those macro doses create psychedelic trips, which are described by users as eye-opening and life-changing. Sometimes they have visions that show what they’ve done in the past – one physician mother described a trip that revealed that she once covered up her daughter’s mouth while she took a work call. Others say it took them on a journey that changed their perspectives completely.

But less is known about the efficacy and safety of microdosing. For researchers, trying to suss out the effects on any healthy person is difficult.

“Really we don’t have good epidemiological studies.  There’s still a lot of work to be done,” Dr. Josh Woolley, an associate psychiatry professor in residence at the University of California San Francisco, said. Woolley is overseeing a clinical trial on higher doses of natural  psilocybin on healthy people. “People who are using, who are microdosing … they’re basically experimenting on themselves.”

That hasn’t stopped scores of moms from forming a largely secretive, burgeoning movement, complete with websites, social media support groups and doctors offering, on the side, to help people through the experiences.

The moms interviewed for this story, many of whom wanted to use first names only because the drug is illegal, say the microdoses are so small they barely register a buzz.

They tout the mushrooms as safer and less high-inducing than a glass of wine or a beer.

But they say the capsules, usually from 0.1 milligrams to 0.3 milligrams per dose, taken over a period of days, gives them more patience, ability to cope, organizational talent and happiness.

It dents some of the motherhood drudgery – laundry, bath time, temper tantrums – and brightens the good moments, creating newfound appreciation for life, they said.

“It’s just 10% helpful,” Courtney, a mother of two who microdoses mushrooms, said. “You’re 10% more patient, 10% more joyful, maybe 10% more willing to roll around in the grass with your kids. And 10% goes a pretty long way. Sometimes that’s all you need.”

Tracey Tee, a Denver mother of one, said since starting microdosing she feels like “Tracey 3.0.”

“It just changed my life,” said Tee, who runs Moms on Mushrooms, an online and in-person community offering microdosing courses and help. “Microdosing just brings all your emotions up and it puts them right in front of your face … you have to stare at them, and then when you do, you let it all go.”

Tee launched Moms on Mushrooms, or MOM, after losing her business running comedy shows during the pandemic. When she began microdosing, she felt a need to create a space where mothers could talk about what they are going through.

The notion of “mother’s little helper” goes back several generations. That phrase was coined by the 1966 Rolling Stones song about Valium. Today, gift stores are filled with “mommy’s sippy cups” and “mommy needs wine” T-shirts. During Tee’s comedy shows for mothers, called “The Pump and Dump Show,” she often watched mothers come in gaggles and blow off steam with large numbers of drinks.

“Moms are just struggling … but many of us have moved past, I think, wanting to gather and just guzzle five bottles of wine,” she said. “We’re craving something deeper, and we’re definitely craving community. Besides, with every day that passes, I can guzzle less and less alcohol.”

Dr. Neill Epperson, one of the world’s foremost experts on women’s mental health and the chair of psychiatry at the University of Colorado School of Medicine, said the majority of people using SSRIs, or prescription antidepressants, are women. And she notes the World Health Organization has found major depressive disorder the leading cause of disease burden for women internationally.

“Parenting is freaking stressful,” Epperson said. “We have created a very stressful world and our physiology does not evolve as quickly as our environment.”

But Epperson worries about microdosing mushrooms and measures to legalize access to them. “I feel like we have to slow down and do the research before we just … start opening up all these treatment centers and saying, ‘We know what we’re doing,’” she said.

Even though the Food and Drug Administration designated psilocybin as a “breakthrough therapy” in 2018 for treating depression, mushrooms and psychedelics remain illegal under the federal Controlled Substances Act.

Denver County has decriminalized possession of hallucinogenic mushrooms, which means possession is a “low law enforcement priority.” It is still illegal to buy and sell them.

Woolley, at the UCSF, is intrigued by the microdosing mommy movement because he understands their call for help. “How do you measure something that might make people have more patience with their children?” he said. “I have a 4- and a 6-year-old, and I certainly would like that … But to prove it in a clinical trial? We’re talking about small changes that may matter a lot, but they’re much smaller than if someone is severely depressed and can’t get out of bed.”

As for Jackson, she became curious about psilocybin after her special needs son relapsed with a severe seizure illness after seeing miraculous improvement from taking CBD. For four years, the teenager had moved out of hospice, where he was having more than 100 seizures a day, to being a happy teenager. Then the seizures started up again, and Jackson felt helpless.

“I was a mess,” she said. “I couldn’t remember if I fed my kids dinner. I was really, really struggling.”

Jackson was having symptoms of post-traumatic stress disorder when her son started having seizures again. Her heart was racing, she was sweating and panicking.

She did a larger dose of psilocybin with a therapist and a guide in 2016, and now marks her life before and after that experience. Afterward, she had a deep understanding her son wasn’t broken, and she was better able to care for him.

After that, she microdosed 0.1 milligrams of mushrooms, three days on and four days off.

Jackson will often take several months off from it, until she feels that familiar wall coming up around her. She still sees a counselor.

“Fortunately, I was able to save my kid,” she said. “And then I was looking for something to save myself.”

For more from CPR, go to www.cpr.org