There’s a big difference between wanting to protect the land and being able to make it happen. The litany of legal lingo and financial mine-fields littering the path to land protection can be daunting, if not downright impossible to overcome.

The key to taking the leap is having the right guide, someone who knows their way around that burning ring
of regulatory fire. Even better is an entire organization of guides dedicated to making land protection a priority.

For the past two and half decades, the La Plata Open Space Conservancy has helped private landowners and municipalities across the Four Corners protect thousands of acres of open space, including almost 2 percent of La Plata County alone.

With the conservancy’s 25th anniversary on the horizon, Executive Director Amy Schwarzbach felt it was time to celebrate the heroes – the guides – who made it all possible.

“The influence those individuals have had is heroic,” she said.

One of the first people she thought of was the conservancy’s founding executive director, Katharine Roser.
Not only did Roser serve as the conservancy’s executive director for 18 years, she helped form a statewide organization to protect open space called the Colorado Coalition of Land Trusts and was involved with the creation of Great Outdoors Colorado, a program in which lottery revenues are used to protect or create parks and open space.

Roser, along with seven other Conservation Heroes will be honored at the conservancy’s upcoming Snowdown event, fundraiser and 25th anniversary celebration, Thurs., Feb. 2, from 4:30-8 p.m. at Mutu’s Italian Kitchen, 701 E. 2nd Ave.
Joining Roser on stage is Steve Wheel-don, who was key to helping the organization go from government committee to open space conservancy. In addition to serving as board president for 15 years, his financial knowledge and expertise helped strengthen the foundation on which the Conservancy still stands today, Schwarzbach said.

Along with Wheeldon, honorees John Norton and Brad Tafoya also lent a hand in navigating the financial minefield of appraisals and tax incentives that come with conservation easements in Colorado, particularly as the movement took shape over the past several decades.

Another honoree is Jerry Zink, who also served as a board president and continues to volunteer as a board member today. As owner of the Sunnyside Meats processing facility and supporter of the local food community, Zink brought in the agricultural know-how.

Horse Gulch and Oxbow Park & Preserve to the city’s list of open spaces.

Finally, this first group of Conservation Heroes includes representatives from Great Outdoors Colorado. Peter Ericson, GOCO’s deputy director, and Jim Spaanstra, the executive director, will be on hand to celebrate the $915 million in lottery funds spent on projects thus far – $10 million of which has gone to protecting nearly 4,000 acres in La Plata County.

“There’s just so many people who had a part in this,” Roser said. “It doesn’t get done by just a handful of people.”

The Conservancy began as an arm of La Plata County. In the mid-1980s, the public wanted to do something to protect local lands. The county responded by creating the La Plata Open Space Committee.

Those involved soon realized budget limitations and government ties actually did more to restrict their efforts, and they eventually morphed into a private, non-profit organization in 1992.

Roser said back then, locals would often bemoan the financial challenges of living in Durango – low wages and a high cost of living. The local catchphrase was “you can’t eat the scenery.”

She would argue, residents can and do eat the scenery.

In addition to the unique quality of life open space affords residents, Roser explained, it’s the bedrock of Colorado’s economy. The financial windfall the state enjoys in recreation, agriculture and tourism alone likely brings in billions.

“People are eating the scenery,” she added.
One of the testaments to the public’s desire to protect open space in Durango is the continued support from locals. For example, the city’s half-cent sales tax earmarked for parks and open space projects was recently renewed by residents.

“People realize the value of open land,” Roser said. “I think that’s a big change from 25 years ago.”

The other big change is the process of protecting the land.

“It’s gone from being a grass-rootsy thing to being a very sophisticated movement,” Roser said. One of the best ways to protect private land is also the most complicated – conservation easements. Creating one comes with tax incentives at both the federal and state level; it’s not a way to make money, but it can help cover the costs of land protection.
Unfortunately, the tax incentive program and conservation easement process was abused by some in the early years. In an effort to provide some assurances to Colorado residents looking for help, Roser helped to create an accreditation process. It’s called the Land Trust Accreditation Commission, and Roser continues to serve on the commission today.

“You get into money and you get into problems, unless you do it right,” she said. As the Conservancy looks toward the next 25 years, Schwarzbach said her focus will be on the responsible protection of resources the community values, like open space.
“It is easy to live in a community and see open space and take it for granted,” she said.

Last year, the Conservancy was contacted by 15 different landowners in the Animas Valley alone. They’ve also talked with one couple in Archuleta County looking to protect 300 acres in the Piedra River Valley, and another outside Colorado looking to preserve 900 acres.

Most of the Conservancy’s work is done around the kitchen table, where Schwarzbach and landowners sit and discuss how to protect the land – and the memories it holds – for generations to come.

“(Because) once you pave a piece of land under, you never get it back the way it once was,” she said. 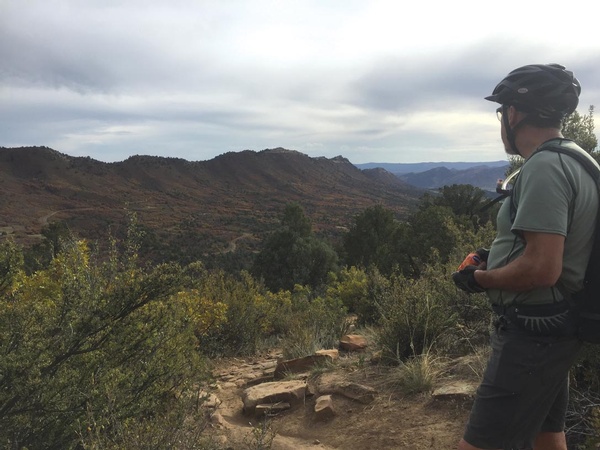 Kevin Hall, Community Development Director and one of the Conservation Heroes to be honored Thursday, takes in the view of Horse Gulch atop the Extended Raider Ridge Trail./Courtesy photo

For everyone involved with the Conservancy throughout the past 25 years, whether they were a part of its past, present or future, the key to making it work is the people.

Which is why Amy Schwarzbach, executive director for the La Plata Open Space Conservancy, said they plan to spend all year honoring these “Conservation Heroes,” and she’s asking the community for help. If you know a Conservation Hero, let the Conservancy know by visiting their website at lposc.org.