New 'New Deal' a pretty good deal
Infrastructure and Build Back Better a boon for the West, no matter what Boebert says 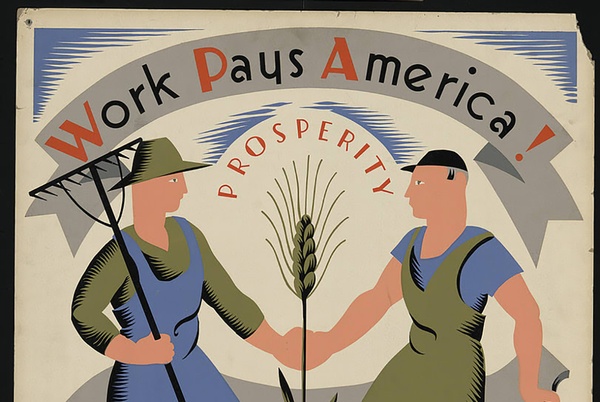 THE NEWS: Rep. Lauren Boebert, who represents Colorado’s Third Congressional District, derides the Infrastructure Investment and Jobs Act (signed into law this month) and the Build Back Better Act (passed by the House and awaiting a Senate vote) as “socialist wish lists.”

THE CONTEXT: Boebert, meet Marriner S. Eccles, who served as Chairman of the Federal Reserve under Franklin D. Roosevelt and was one of the New Deal’s biggest boosters.

In February 1933, at a Senate Finance Committee hearing examining causes of and possible solutions to the Great Depression, Eccles took the stand. The root cause of the nation’s woes, he said, had nothing to do with debt, laziness, extravagance or God and everything to do with maldistribution of wealth: The richest 1% of Americans had amassed 25% of the nation’s cash, leaving one-third of the nation out of work, impoverished and unable to fuel the economy.

Eccles then laid out a plan for getting the nation out of the mire, which included spending billions on public works programs and millions more on a social safety net. He also proposed refinancing farm mortgages and cancelling interallied debts. To pay for it – and further the goal of redistributing the wealth – the top marginal tax rate would be increased substantially. It was every bit as “socialist” as today’s aforementioned bills.

And yet, Eccles was neither a Marxist, socialist, nor even a Democrat. In fact, the Utah Republican was about as capitalist as they come. He was one of the West’s most prominent businessmen, heading up a conglomerate of banks, a three-state dairy company, a major lumber company and Utah Construction Co., which was involved in the building of Hoover Dam. Economic inequality, to him, was less a moral failure than bad for business: If the ultra-rich hoarded all the money, then the masses couldn’t purchase goods, bringing the wheels of capitalism to a screeching halt. Only government could save the economy – and, for that matter, capitalism itself.

And so, the New Deal was enacted later that year with a second phase in 1939. It combined federal spending with financial reform, new regulations and major social programs – many of which endure and which Boebert and her ilk surely would mock if proposed by Democrats today.

The New Deal did just as Eccles had hoped: With the help of a top marginal tax rate as high as 94%, wealth was redistributed and the middle class grew, leading to decades of American prosperity. And by specifically targeting rural areas, many of them in the West, for public works projects and poverty alleviation, the New Deal helped narrow the urban-rural divide. For better or worse, capitalism was rescued by what some might call socialist programs.

Fast forward to 2021. The U.S. is not in a depression – at least not an economic one – but the gap between rich and poor has yawned beyond pre-Great Depression proportions, politics are pathologically polarized, the populace has been ravaged by a pandemic, and the economy has been thrown off balance by COVID-related restrictions, supply chain snarls and inflation. To address these ills, on Nov. 5, Congress finally ripped a page out of Eccles’ playbook and passed the $1.2 trillion, New Deal-esque Infrastructure Investment and Jobs Act, and now the Senate is poised to vote on the even bigger Build Back Better Act.

At over 2,000 pages long each, the bills are intimidating. But if Boebert were to actually read them, she would find plenty of goodies for the Western U.S. and her constituents in western Colorado. The following list is just a small sampling:

• $4.7 billion to plug and reclaim orphaned oil and gas wells.

• $11.3 billion for the Abandoned Mine Reclamation Fund and another $3 billion to clean up abandoned hardrock mines.

•$3.37 billion for wildfire prevention, detection and suppression. And, wildland firefighters will get a pay raise, and 1,000 seasonal firefighters will be converted to permanent, year-round federal employees.

• $2.4 billion for water projects around the West, plus another $300 million to implement the Colorado River Basin Drought Contingency Plan.

Included in the Build Back Better Act:

•$1 billion for the Rural Partnership Program to fund rural development.

• Expansion of the child tax credit and free pre-school to every 3- and 4-year-old.

• Expansion of the earned income tax credit to childless low-wage workers, which would amount to a tax cut for thousands of folks in Boebert’s district.

By now, you might be wondering how the heck the government is going to pay for all of this (a question conservatives didn’t ask about the Trump tax cuts for the wealthy, which ended up costing the government –and all of us other non-wealthy taxpayers – trillions of dollars). Instead, it will try to close some loopholes by giving the IRS resources to pursue tax evaders and raising the royalty rate on oil, gas and coal, among other things.

Is this new New Deal perfect? Hell no. A lot of good measures, such as paid parental leave, were stripped out, not by Republicans, but by Democrats. Still it has the potential to transform America in the same way the New Deal did.

Jonathan Thompson is a fourth-generation Durangoan who runs the Land Desk, a thrice-weekly newsletter: visit www.landdesk.org. He is also the author of River of Lost Souls, Behind the Slickrock Curtain and Sagebrush Empire.