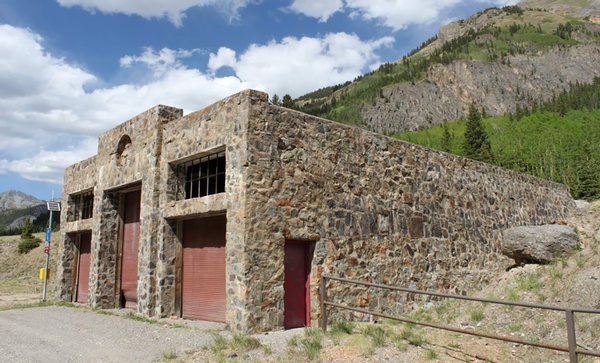 This 1940s stone garage is just off Highway 550 between Ouray and Silverton./ Colorado Public Radio

Seven miles up Red Mountain Pass from Ouray, just after the kinks of Highway 550 smooth out into the straightaway of a high-altitude area known as Ironton Park, sits a building alongside the road.

The building is a thick-walled structure made of rocks that are embedded in stucco. It looks like a large garage. If drivers on Highway 550 notice the structure, they might mistake it for another remnant of the area’s once-bustling mining industry. But the building isn’t connected to mining at all, said Andrew Gulliford.

Gulliford, who teaches history at Fort Lewis College and writes history books about the West, noticed the structure and pulled his car over to look at it.

“It looked like a large industrial garage, but with no gas pumps or anything,” he said. “I was intrigued.”

Guilliford’s curiosity was satisfied by the Ouray County Historical Society and another driver with a connection to the garage. He learned that the garage had been there since the 1940s. It had been part of a long-gone retreat for a religious sect whose practices informed a Supreme Court decision about religious freedom.

But the garage’s story begins with a failed ski area. In the late 1930s, two Ouray businessmen decided to build a ski resort in Ironton Park. They constructed a lodge from bricks and timber salvaged from a nearby defunct smelter, built a lift to serve an 1,800-foot run and dammed streams to create a lake. They had then-Colorado Gov. Ralph Carr out to showcase the ski area with a big publicity splash.

But the ski resort never opened. While the history is murky, some people speculate that this was due either to the ski run being in an avalanche chute or to the partners being unable to agree on whether alcohol should be served in the lodge. World War II rationing also likely played a part.

The Saint Germain Foundation was founded in 1930 after Guy W. Ballard, a mining engineer, went hiking on Mount Shasta in California and said he encountered a being who introduced himself as Saint Germain. In foundation depictions, the being was bearded, had luminous large brown eyes and bore a passing resemblance to Jesus. Ballard said that Saint Germain gave him teachings referred to as “I AM,” which he later laid out in a series of religious lessons and books.

The I AM movement grew spectacularly during the dark days of the Depression. Ballard charged for the lessons he said Saint Germain had imparted to him, and eventually some disgruntled followers filed suit alleging they had paid for bogus teachings.

Ballard died – or “ascended” as I AM teaches – in 1939. His wife, Edna Ballard; son, Donald Ballard; and a few other church officials had been carrying on with the sale of the lessons, and in 1942 they were convicted of mail fraud.

To escape all the bad publicity and legal hassles, members of the foundation moved to Ouray and bought the old ski area.

They appealed their convictions, and in 1944, the Supreme Court ruled in United States v. Ballard in the Ballards’ favor, viewed as a major victory for the First Amendment.

The late Justice Robert Jackson wrote, “I can see in their teachings nothing but humbug untainted by any trace of truth.” But the ability of individuals to believe “humbug” was upheld by the ruling. Basically, it found that people can believe things that can’t be verified.

With that legal burden lifted, the ski lodge became the Saint Germain retreat. Some members built cabins nearby. The church also built a radio tower that broadcast I AM lessons to the surrounding area.

“It was regarded as quite a miracle in the 1940s because we didn’t have the technology then that we have now,” recalled Bud Thayer, a longtime Saint Germain member. “So, the whole thing was fantastic. We never had a failure the whole time.”

Church members also placed carillon bells in the basement of the lodge and a musician would play Sunday morning concerts. Residents of Ouray would drive up on Sunday mornings and park along the highway to listen to the carillon concerts.

The Saint Germain Foundation’s time in the San Juans ended after the retreat burned down in 1952. A church member was trying to melt icicles from the lodge roof with a blow torch when the roof caught fire. Thayer said the building burned too quickly for help to come from Ouray because it had been built from old mine timbers that were extremely dry.

The church planned to rebuild, but that didn’t happen. The property was sold and eventually became public land.

Remnants of the lodge’s foundation, the garage, a storage building and other stone structures and twisted metal rails are all that is left of ski and religious dreams.

Church members still visit, and the Saint Germain Foundation continues. It has more than 300 temples and sanctuaries around the world, including one in the Capitol Hill neighborhood of Denver.

As for the garage, Thayer said that it was used to store furniture and other items that were donated to the church. He said it was made large enough so that a semi-truck could back up and unload items that would eventually be moved to Saint Germain temples around the world.

Gulliford would like to see the site added to the Colorado State Register of Historic Places and possibly the National Register of Historic Places because of its link to the Supreme Court ruling on religious freedom, which paved the way for other religious sects that came later. He believes travelers who stop on the side of the road would be surprised to learn its history.

“It is so important,” he said, “because so many other groups in the 20th Century profit from that critical decision.”