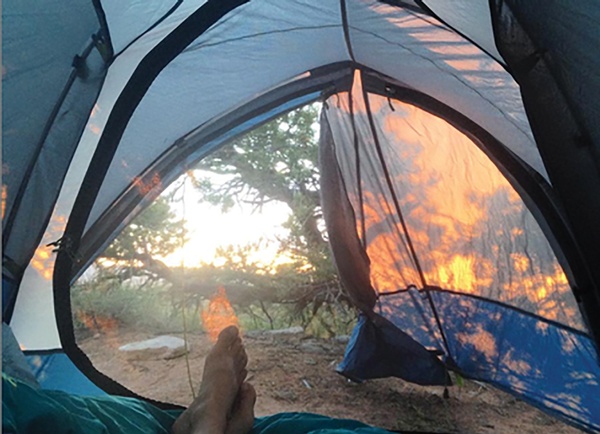 My parents first took me camping before I could even walk, and throughout my childhood our version of a family vacation was to pack up the decrepit station wagon or the oil-guzzling International Harvester, head out into the land of sage and sandstone and set up camp underneath some old cottonwood. We’d throw our sleeping bags in the dirt and my dad would cook over the fire one of his delicacies – Dinty Moore stew topped with those crispy chow mein noodles out of a can, perhaps, or Hormel chili with gobs of cheddar cheese – and then I’d crawl into my shitty little bag and lie shivering as I stared up at tree-branch skeletons silhouetted against the bowl of stars.

It was a wonderful, if not always comfortable, childhood.

We almost never stayed in campgrounds. We were dispersed camping devotees. Maybe we were purists or maybe we were just poor, the latter also being the best explanation for our lack of adequate camping gear. We eschewed tents and stoves and warm sleeping bags and even functional sleeping pads. Our water purification system was an empty Clorox bottle filled with warm, murky pothole fluid, the taste redolent of stone and bleach and possibly tadpoles.

As an adolescent I began camping with friends. For the first several years none of us were old enough to drive, so our parents had to haul us out into the mountains or desert and drop us off and come back and pick us up a few days later. Usually we were “backpacking,” albeit only a few miles, at most, so staying in campgrounds wasn’t really an option. But looking back, and considering how young we were – 12, 13, 14 – you’d think our parents wouldn’t let us stay anywhere except campgrounds.

Our parents weren’t like that, though. Nor were we. As I grew older, my distaste for tents and developed campsites grew stronger. Why put up a barrier between oneself and the stars? Why pay to be surrounded by other people when the whole point of camping is to get away from it all – especially other humans?

I suffered due to my stubbornness. I’ve lost count of the number of interminable soggy-sleeping-bag nights. Winter camping, even with a decent bag, can be a sleepless hell without a tent. And in the summer, I often woke up in a blind panic, my eyes swollen shut from nocturnal mosquito and gnat attacks. Over time, the regular dispersed campsites were trampled and trashed, the lower branches of all the trees cut or busted off for fires. There were times when we’d set up camp in one of “our” spots, only to have someone else come along and plop down right next to us.

It wasn’t until I was almost 30 that I bought my first tent. My wife and I wanted to take our daughter, a toddler, camping, and sleeping under the stars just wouldn’t cut it. So we headed down to Walmart and picked up a cheap dome deal and headed west to – egad! – a campground. And you know what? It wasn’t so bad. Lydia, our daughter, loved the tent – she cried when we took it down –and I woke up without a single gnat bite. As I dismantled the tent I noticed a scorpion that had been nestled up underneath the ground cloth, and I shuddered as I thought of where it might have been had we been tentless. Staying in a place with a picnic table and built-in shade and bathrooms and running water and trash cans made camping with a 1-year-old downright pleasant.

Maybe I had seen the light, at last. Or perhaps it was more like surrender. Either way, I’ve become a devotee of both tents and campgrounds in the years since. Sure, I still occasionally sleep under the stars and at the mercy of scorpions and mosquitos, I still back pack, and I still frequent a few very special dispersed car-campsites. But in recent years, I’ve found the nondesignated camping areas to be just as crowded as the designated campsites. And because the former lacks the amenities – toilets, fire pits, trash bins, and so forth – the impacts to the site and the surrounding area are greater.

Camping alone, I feel I can do the dispersed thing with minimal impact. The more one adds to the party, however, the more untenable dispersed camping becomes. What starts out as a contained campsite grows as folks head out into the fragile surroundings to find private tent spots or hammock-hanging trees or a good place to park the car or their own under-a-juniper crapper. Cooking for a group is a pain without some sort of table, so you’ve got to fork out for the rollup tables when dispersed camping as well. Staying in a campground soothes such concerns.

And so it is that I learned to stop being a cantankerous young jerk and aged into a fondness for both tents and campgrounds.

The Land Desk is a thrice-weekly newsletter from Jonathan P. Thompson, longtime journalist and author of “River of Lost Souls,” “Behind the Slickrock Curtain” and the recently released “Sagebrush Empire.” To subscribe, go to www.landdesk.org.