Off-grid living
And as I sit here typing these solar-powered words, I am convinced the desert-lovers' dream of a solar array on every rooftop, obviating utility scale solar installations on wild lands, is attainable. 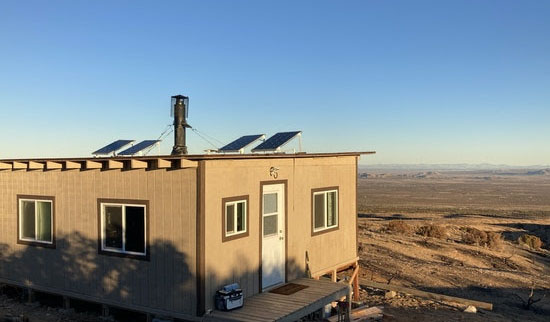 A more sustainable energy grid is possible, but it's going to take big changes.

Way back in 1998, my wife Wendy and I were living in Silverton when a couple of community-minded Durango entrepreneurs asked us to come down to the relative lowlands to help them start an artisan bakery. Even then Durango home prices were somewhat out of reach (it’s all relative – we almost purchased a downtown house for $125,000, but worried that it would break our budget).

So, we did as workers do all over the West: Drove till we qualified. Actually, we drove beyond qualification range, all the way to Arboles, on the north shore of Navajo Reservoir, where we found a beautiful, off-grid strawbale home that was in our price range. We couldn’t help but buy it, the 45-minute commute be damned.

It received all its electricity from a ragtag array of possibly-pilfered photovoltaics backed up by six golf-cart batteries ($105 each at Sam’s Club). A single inverter allowed us to use AC appliances. I don’t know how much the system cost, but I’m certain it was no more than $5,000.

And it delivered: The system powered all our lighting, a computer, a television, a stereo system, fans, irrigation, well and water-pressure pumps, and various small appliances and power tools. We had a propane stove, refrigerator and small heater and a solar-assisted hot water heater. We could also heat water through our woodstove and oven, and most of our heat came from wood stoves.

We never had to use the backup diesel generator. So long as I kept the panels clear of snow, the power held out during the longest nights and on cloudy days. We eventually moved away for career reasons and – regrettably – couldn’t afford to hold onto the place. I still yearn for that off-the-grid living and get a taste of it when we visit Wendy’s father here in California.

I’m currently writing from a cabin wholly powered by four, small photovoltaic panels paired with four deep-cycle batteries. My father-in-law’s main house, which is larger, is similarly powered by the sun and batteries. The nearest power line is miles away, electric bills are non-existent. The dual-system on this cabin – four panels, four batteries, two inverters and two controllers – cost about $1,200. The system powers lighting, a water pressure pump, a laptop for hours each day and night, and charges three smartphones. We haven’t come close to maxing out the capacity or draining the batteries.

There is a catch, though: All of the off-grid homes I’ve referenced were constructed to be off-grid. They are small and therefore more efficient. Our Colorado home had thick mud and straw walls for better insulation. Most of the lighting was fluorescent or LED, made for boats or RVs, and ran on direct current – the overhead light in our bedroom was a Volkswagen bus headlight recessed into the ceiling. A cistern in the house (actually, a built-in stock tank) caught rainwater from the roof to lessen the need for pumping from the well. And the well pump was manual, so we could turn it on when the sun was out and fill the cistern without draining batteries.

This cabin and our old off-grid house still relied on propane – a fossil fuel – for cooking, refrigeration and water-heating, a major drawback. But a slightly larger solar system would allow for more electrification as long as one used super-efficient DC refrigerators, heat pumps for cooling and heating, and solar hot water heaters. Stoves and ovens are a bigger challenge, but induction cooktops are extremely efficient and getting more so. Even small, efficient washing machines are available.

And as I sit here typing these solar-powered words, I am convinced the desert-lovers’ dream of a solar array on every rooftop, obviating utility scale solar installations on wild lands, is attainable.

Then I think back to our road trip across the desert, and I’m not so sure.

Before being captivated by the sci-fi sight of the Ivanpah Solar Power Station in the Mojave Desert, we pulled off the Interstate on Las Vegas’ fringe to get some overpriced nourishment at a Whole Foods. We gawked at the gaudy skyline, recoiled at the conspicuous consumption – of goods, energy and water – that surrounded us.

As we continued south through a sea of giant, new homes, I realized that this place – and so many other cities in the West – had been built to use huge amounts of energy. Beginning in the middle of the last century, monopolistic utilities, in cahoots with the coal industry and the federal government, set about to manufacture demand for their product, in part by drawing new customers to the region’s cities.

Now, we are in the midst of a disaster, manifested by warming temperatures, aridification, an endless megafire season, smog-obscured vistas, heat-related deaths.

But the tide is turning. The cost of solar panels are decreasing and electricity costs increasing. The centralized power grid is becoming more vulnerable to climate change-enhanced extreme weather, and the power lines criss-crossing the sky are ever more prone to sparking devastating wildfires. More and more people want to break free from the grid and make a go on their own, but they feel it’s not really a choice, because decades of societal inertia, bolstered by the entrenched power of the utility industry, stand in their way.

The system – the power grid, decades of poor urban planning, a culture built around fossil fuel combustion and mass consumption – remains stuck in the last century. Sure, a lot of the suburban Las Vegas homes had a solar panel or two on their roofs, but it’s not enough for their decadent lifestyles. With this sort of gluttony baked in, there really is no choice but to blanket the desert with solar panels and the plains with wind turbines – and even that won’t do the job.

Something funny happens to those who live off-grid, even for a short time. They become more aware of their energy consumption, of the weather, and the length of days and nights. They pay attention to when they should charge their devices and when they should unplug, they learn to enjoy washing dishes, they shorten their showers, meditate as they hang clothes. Efficiency becomes habitual. Extend this ethos across society, and perhaps there will be progress.

We can have energy transition and still save most of our public lands. But it can’t happen until society changes the way it lives, until the collective “we” alter our gluttonous ways, and learn, at last, to live within our means.

Jonathan Thompson is a fourth-generation Durangoan who runs the Land Desk, a thrice-weekly newsletter: visit www.landdesk.org. He is also the author of River of Lost Souls, Behind the Slickrock Curtain and Sagebrush Empire.