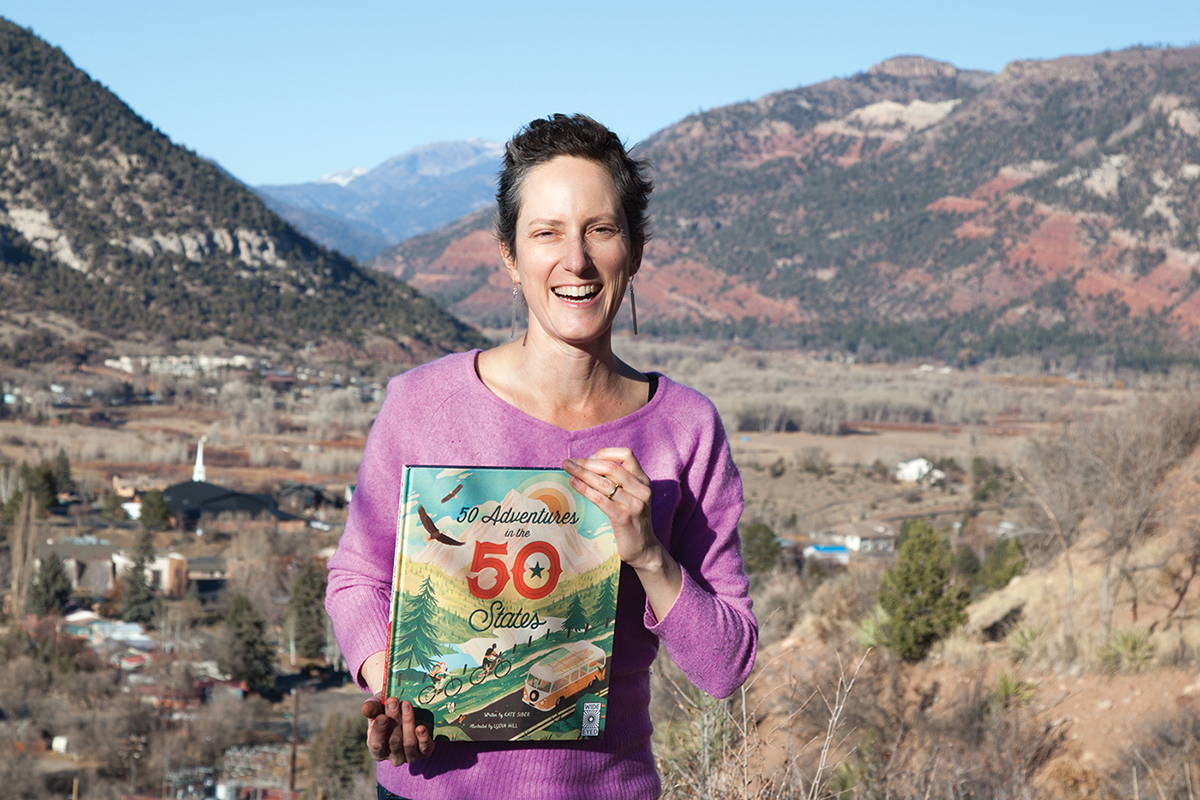 Local writer Kate Siber with her latest book, 50 Adventures in the 50 States, for adventurous kids (and kids at heart.)/ Photo by Eileen Dawson

Fortunately, local travel and adventure writer Kate Siber has just the ticket with her newly released book, 50 Adventures in the 50 States, meant to spark the big imaginations of small readers. (While technically a children’s book, it has plenty of keep adults engaged during storytime, too, from splashy retro illustrations to interesting tidbits on animals, plants and natural wonders.)

“It’s the perfect time for a book like this,” Siber said of the unexpected timeliness of the book. “Even though most of us aren’t travelling anywhere, it feels like it’s what’s needed. Something that is cheerful and celebratory of our amazing public lands in this country … and all the beautiful things we can do in this world.”

For Siber, who is a frequent contributor to Outside magazine and is perhaps best known for her National Geographic hiking guide 100 Hikes of a Lifetime, a children’s book may seem like a bit of a departure. But, as one would expect, she took the new adventure in stride. In fact, this is her second children’s book for the U.K.-based Quarto Publishers – her first, National Parks of the U.S.A., came out in 2018.

“I never thought I would write a children’s book, but it was a fun departure,” Siber said. “At first, I thought, ‘Is this really where I want my career to go?’ But I was just having so much fun doing it.”

Siber was approached by Quarto to write both books based on her experience in the outdoor and travel industry. “They thought I was a natural fit,” she said. “With my involvement in the outdoor industry, and adventure travel especially, I know that terrain really well.”

She was commissioned by Quarto for the 50 Adventures book in the fall of 2019, and in the ultimate twist of art imitating life, soon had an unplanned itinerary of another sort thrust upon her.

“I agreed to the book, and all hell broke loose in my life,” she said.

In November 2019, Siber, who at the time was 39, was diagnosed with invasive breast cancer. Obviously something one never expects, Siber, a vegetarian and all-around health nut with no family history of the disease, was particularly blind-sided.

“The idea that it was breast cancer really didn’t occur to me,” she said of finding a lump during a self exam. “It was quite a shock to the system. I wanted to say, ‘No, no – you don’t get it. I do all the things right.’”

For the next few months, the writing project was put on the back burner as Siber threw her efforts headlong into fighting the cancer. “It was actually a lot of work,” she said, describing the medical gauntlet, from research and appointments to chemo and surgery. “I was pretty disoriented in the general scheme of things … all work ground to a halt.”

And then, just as she began to come back up for air, the pandemic hit. Siber admits the virus took a bit of a backseat to the cancer, but she still found herself stuck at home due to a chemo-compromised immune system. That’s when she decided to sit back down at her keyboard, with a sense of déjà vu. The last time she sat down to write a book was in January 2017, on the heels of a presidential election that didn’t exactly go as she – and many others – had hoped.

“It was like a trauma; it felt like a very bleak time,” she said. “This was almost like a similar situation. These big writing projects were like a tonic for what my life was serving up at the time.”

While her husband “sheepishly” snuck out the door to ski last spring, Siber poured herself into the book – writing, fact-checking and working with her young U.K. illustrator, Lydia Hill.

“She was just out of school and did an amazing job … I won the illustrator lottery,” Siber said. However, there were some perhaps more American things that Hill wasn’t so familiar with, like surfing. “I had to tell her, ‘OK, we’re going to need to have the surfers pointed toward shore,” Siber recalled.

Eventually, with the understanding of her editor, Siber’s book came out in October – on deadline.

“It was published on time, and everything ended up being OK,” she said.

Since coming out, the new book has sold close to 5,000 copies on Amazon alone and was featured on the site’s childrens holiday gift guide. Of course, Siber encourages all you locals to buy your copy from Maria’s Bookshop, which will even which will even get Siber to write a personal message on the inside cover.

“It was such a delight. It turned into a real blessing,” she said of the book. “It’s fun to have these random things drop in on you. There’s something so gratifying about creating an object in this world.”

And while Siber has her sights set next on an adult book – subject TBD – perhaps she’ll put down the pen long enough to go on a little adventure of her own. (This time the fun kind.) 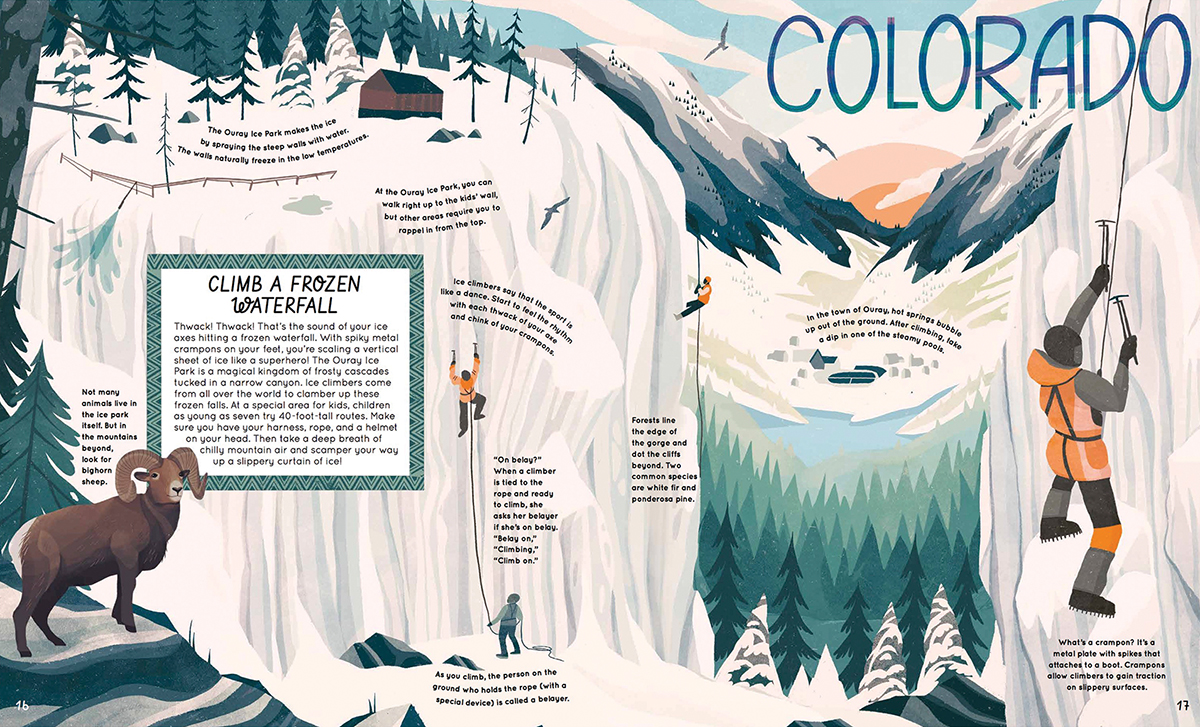 The Colorado spread from Kate Siber's children's book 50 Adventures in the 50 States, which includes something near and dear to Durangoans' outdoorsy hearts: ice climbing and mountain bighorns.