On board to have fun
Colorado Paddle Co. offers SUPS with a decidedly Durango vibe 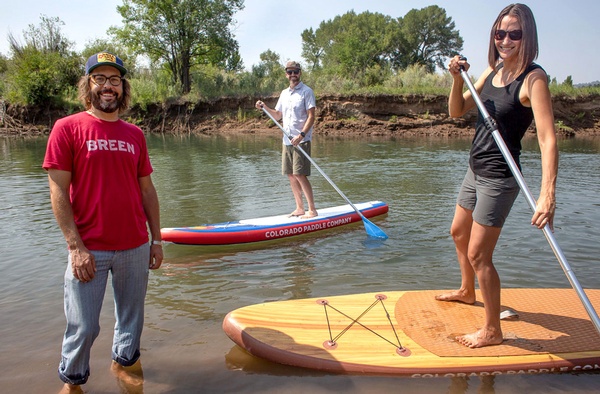 Artist Tim Kapustka, left, and Chase and Jen LaCroix, of Durango Outdoor Exchange, model some of their paddleboards from the locally based Colorado Paddle Co. The three are partnering on the business, with the LaCroixes selling the boards at their store and Kapustka doing the design work./ Photo by Jennaye Derge

I don’t know when I first heard “Durango” used as an adjective, but the first time I used it as such was in a very “Durango” fashion.

“Durango” as an adjective describes any person who arrives to meetings on a bike and in their river shorts, usually unshowered and 10 to 15 minutes late. The term can also be used to describe the phenomenon of running into 10 people you know in the grocery store, usually still in your river shorts.

“Durango” as an adjective is an interchangeable way to describe the town’s general outdoorsy vibe, the friendly people who live here and more recently, the new local paddleboard company, Colorado Paddle Co.

Colorado Paddle Co. is all the above characteristics, including the way it was formed – by a buncha outdoor-loving, bike-riding, river-loving, friendly locals who you always run into in the grocery store.

Its founder is former resident Nico Foster, who in 2015 was building tiny homes. One day he decided to fashion himself a paddleboard using leftover roofing material from a job site. Just for fun. Which is so “Durango.”

He started manufacturing the boards en masse (outsourced and from materials other than roofing scraps) and sold them online for a few years until he decided to sell the company and move from Durango to Silverton.

This is where Jen and Chase LaCroix stepped in. Owners of the Durango Outdoor Exchange, a gear and consignment shop, the couple had been crossing paths with Foster and eyeballing his company. They loved it was a local business and that the boards were well-made. But still, a paddleboard company is a strange thing to sit on the edge of your seat for, so why were they so excited?

From the time they opened, Jen and Chase had a consistent demand from customers for paddleboards, but because of popularity and wholesaler logistics, had none to sell. When the chance finally came in 2019 to obtain Foster’s business, the LaCroixes scrambled to scoop it up.

Colorado Paddle Co. can, so far, be boastful for many reasons, but one thing it really takes pride in is the usability and simplicity of its boards. Being built at dimensions that are known to enthusiasts as an “all around board” – 10 feet long, 33 inches wide and 6 inches thick – these boards can make any putz (such as myself) feel like they’re ready for the rough seas of life. And look good doing it, too.

Looking good is local graphic designer Tim Kapustka’s role in all of this. Coming in as the third and newest partner of Colorado Paddle Co., Kapustka brings his skill set of design, business ownership and gritty antics to the table. His arguably most infamous graphic, “Have Fun,” is already showing up on the paddleboards and is also his general wish for users.

“Championing ‘fun’ isn’t exactly a risky, controversial stance on my part, and it goes with so much of what this town is – that you choose your own adventure: biking, hiking, reading. Everybody brings their own flavor of fun. And being on the river is a huge one that is shared by a lot of people in this town,” Kapustka said.

And it was pretty simple for Kapustka to go into business with Jen and Chase to begin with. Having already spent time with the LaCroixes to design the logo for Durango Outdoor Exchange, it was natural to bring him on board to help with the new logo and branding for the paddleboard company. But the branding discussion (which was presumably over a couple Durango beers) led to a joke about partnership, which turned into a serious offer just a handful of hours later.

“They called me early the next morning, while I was getting ready to go fishing, and asked me if I was serious about being a partner and I said, ‘Ok, let me go fishing and4  think about it,’” Kapustka recalled.

The whole exchange was all so very “Durango.”

After briefly thinking about it, Kapustka agreed to their terms and joined as the creative director, completing what the team agrees is a great Venn diagram of skills.

“To me, when you’re in a partnership – especially small partnerships – if there is a lot of overlap in skill set it’s almost wasted … but this is pretty awesome from what I see of it,” he said. “Everybody has strong high points and they don’t really overlap.”

The trio agrees Kapustka’s designs are a big selling point of the boards. So far, there are seven unique designs, all of which try to speak to purchasers on an individual level. There is a Colorado “C” board, New Mexico and Texas flag boards, a rainbow board, a “wood” board, a columbine board and more. All to connect users to their individual tastes and personalities while still holding true to the company’s roots and keeping the business very “Durango.”

And they’re open to suggestions.

“We want to understand what the locals want, what they want to see and what type of board they want,” said Jen.  “I really have respect for all the different paddleboard companies, but I like ours in that it’s one style of board with really fantastic designs and it’s user friendly; it’s really meant for everyone.”

And soon, everyone, even if they aren’t in Durango, is likely to start seeing these boards floating rivers and lakes or tied to the top of cars and trucks. Though the trio hasn’t combed out the details yet, their goal is to expand the company to water lovers everywhere, and maybe even eventually expand beyond paddleboards – but that’s a conversation that’s “still in a bag.”

“It’s exciting, all three of us have owned businesses, but this is a new type of business for all of us,” Jen said. “The manufacturing business does feel like there is a different risk – not huge risk and we’re not really vulnerable – but it is new and different,”

In the meantime, they’re taking things one paddle stroke at a time, and, as Tim so appropriately stated, they’re “just getting their feet wet.” In fact, wading through the pandemic manufacturing pauses actually gave them the gift of time to slow down and brainstorm, but now they’re ready to provide that “Durango” vibe to anyone interested in having fun.

To see a Colorado Paddle Co. board up close and in person, check out Durango Outdoor Exchange’s Labor Day sale Sept. 4 and 6 (they’re closed on Sundays.) As an added bonus, the boards will be 20% off.  The boards can also be viewed and purchased virtually from the safety of your own home at: www.coloradopad dlecompany.com ? 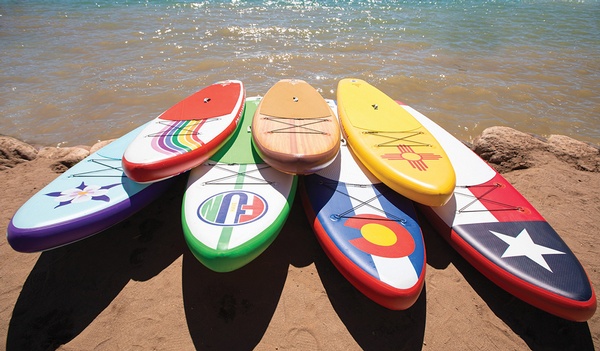 So far, there are seven designs for the boards, which were deisgned by Kapustka, which includes his signature "fun" logo, a rainbow, a columbine and yes, even a lone star for our Texas friends./ Courtesy photo