On the right foot
Ski season out of gates with help of early snow, cold temps 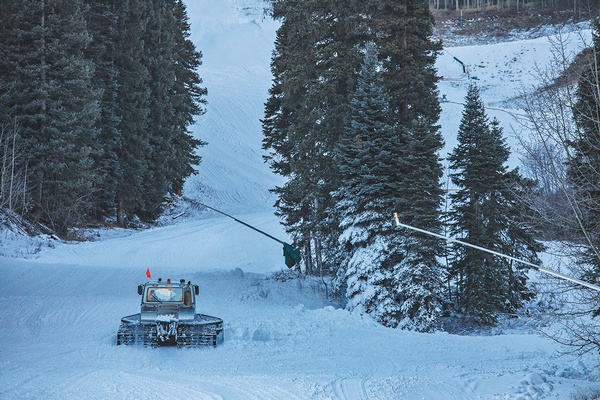 Groomers at Purgatory Resort run the snowcat on lower Demon. The resort is able to offer top-to-bottom skiing for opening day this Sat., Nov. 17 - something they haven't had for the past couple years./Photo by Stephen Eginoire

Wolf Creek got dibs this year. After an epic storm came through in early October and dumped 21⁄2 feet of snow, it became the first ski area in the nation to open.

Not only was it the first, opening 60 percent of the mountain Oct. 13, it was the second-earliest opening in the ski area’s history. (The earliest-ever opening was Oct. 8, 2011). Although the ski area was only open weekends for the rest of October, it was able to start daily operations Nov. 9.

With some snow falling this past weekend and snowmakers supplementing the base area, Wolf Creek is already 90 percent open.

Heading into the season, they’ve completed all the upgrades to their rental, ski school and ticketing systems – going 100 percent digital – and spent the summer installing a new lift and removing hazardous, beetle-kill trees.

The new lift was part of the ski area’s 2012 Master Development Plan, but one change was made from the original plans. It was called the Meadow Lift on those initial maps, but they changed the name to the Charity Jane Express in honor of Wolf Creek owner Davey Pitcher’s mother.

Not only were Pitcher’s parents the previous owners of Wolf Creek, his mother was a big part of the ski area – and particularly with the kids program.

“It was a tribute to her because she was very involved in the ski area,” Rosanne, Davey Pitcher’s wife who also serves as the vice president of sales and marketing at Wolf Creek, said.

The Charity Jane is a high-speed, detachable quad located just east (or looker’s left) of the existing Alberta Lift. The new addition will take skiers and riders from the flat meadow and unload them about a third of the way up the Alberta Liftline. From there, they can ski down to the Alberta Lift and catch a ride back up.

According to Rosanne, the ski area’s current trail map doesn’t feature the new lift but they’re working on a new 3D map and hope to have it printed and online soon.

The new lift will allow for access to what Pitcher said was about 55 acres of under-utilized beginner and intermediate terrain.

There are still a few steps before the Charity Jane is up and running, though. The goal is to complete installation, get it inspected and have the bull wheel turning by Christmas.

While installing the new lift this summer, Wolf Creek was also able to remove about 2,000 hazardous, beetle-kill trees. It’s something they’ve been trying to tackle since the infestation first hit the pass more than a decade ago. “It’s going to be an ongoing project for us,” Pitcher said.

To the west of Wolf Creek, the summer wasn’t quite as productive. The 416 Fire ignited on June 1, and the Burro Fire started one week later, on June 8. Together, the two wildfires burned more than 55,000 acres, cost more than $27 million to fight, and together became one of the largest in Colorado’s history.

The flames never reached Purgatory Resort, but the 416 Fire’s proximity to the ski area and Highway 550 meant the resort had to shut down for about a month. Following a rather dismal 2017-18 winter, resort officials struggled, employees were furloughed or let go altogether, and like most area businesses, they were just hoping to make it through.

So when whispers of an El Nin?o – which often brings above average precipitation to the Southwest – started to come out of weather rooms this fall, it seemed as though things might start looking up in Purgatory.

With colder temperatures and some snowfall (minimal though it might be at this point), crews have been able to make snow since mid-October, and the resort will offer top-to-bottom skiing on opening day this Saturday – something that hasn’t happened for the past couple years.

According to Kim Oyler, director of communications at Purgatory, the plan is to run Lifts 1 (the Six-Pack) and 2 (aka the Engineer Lift, which was the only lift running on opening day last season) on the frontside.

“I think everyone at Purgatory is very excited,” she said. “We think it’s going to be a great winter ski season.”

There are several new things happening this year as well. First off, the resort’s Inferno Mountain Coaster is finally complete. It officially opened at the tail end of the summer and will stay open this winter for weekends and holidays – including this Saturday and Sunday for opening weekend.

The resort also got a couple new additions to the frontside – Mark’s Park and Who (both located in the area between Exodus and What). Mark’s Park is an organic terrain park, which means all the features are built from wood instead of other materials, and Who is a gladed trail for beginners.

The base area has also added several new shops, including Branded (selling everything with a Purgatory logo) and a new snowboard shop. Down at the beginner hill, the resort is introducing The Waffle Cabin, which sells Belgium waffles (also available drizzled in chocolate) that might even tempt advanced skiers to visit.

The other big thing at Purgatory is the free season pass for kids 10 and under. There are no strings attached, according to Oyler. Any child 10-years-old or younger – local or not – can get a free season pass at any time throughout the season.

She said it’s a great way to introduce families to skiing, make it more affordable and help build a new generation of skiers and riders.

Another first for the Southwest is happening at Silverton Mountain, where employees started taking turns Oct. 8. They’ve announced on the website that for the first time, heli-skiing operations begin as early as Nov. 24.

The lift, however, isn’t scheduled to fire up until the end of December – but, of course, that could change. Like most places in this corner of the state, they’ll open when Mother Nature decides.

That’s true for the Durango Nordic Center, which hosts its first Nordic races and clinics in late December. Hesperus Ski Area, which is now owned by the same corporation as Purgatory, Mountain Capital Partners, will also open once the snow falls. Durango’s Chapman Hill plans to start making snow in early December, and will likely open soon after.

There is the possibility of snow forecasted for the Thanksgiving holiday, but it’s still too soon to tell. One thing meteorologists are saying for certain is that this season won’t be a repeat of last winter.

The latest from the National Weather Service’s Climate Prediction Center is an approximately 80 percent chance that an El Nin?o will form this winter. It’s been called a “weak” El Nin?o – but any El Nin?o is a good sign.

It means plenty of precipitation in this corner of Colorado, according to NOAA officials. Not only would a wet winter be good for hitting the slopes, it would also chip away at the region’s drought conditions.

Either way, the early snowfalls and ski area openings have many people optimistic about the upcoming ski season in the Southwest – and ready to put the past year behind them. 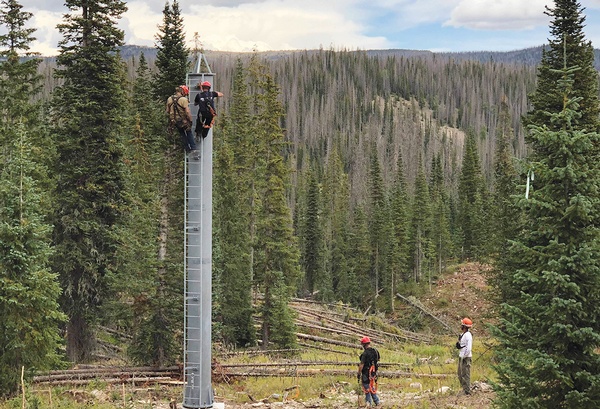 www.purgatoryresort.com
Purgatory will have top-to-bottom skiing on opening day, Sat., Nov. 17, along with their new Inferno Mountain Coaster, two new trails, some new stores and free skiing for kids 10 and under.

www.tellurideskiresort.com
Telluride’s benefitted from cold temperatures and some early snowfall. Officially, opening day is Thanksgiving, Nov. 22, but they’ll fire up the lifts on Wednesday, Nov. 21, for their annual benefit day.

www.silvertonmountain.com
Heli-skiing operations begin Nov. 24, and the lift fires up in December.

www.durangonordic.org
Besides the annual Nordic races, clinics and triathlon events, the Nordic Center hosts the Full Moon Holiday Howler on Dec. 22 and Jan. 18. The event features a bonfire, refreshments and food while watching the full moon rise over the Twilight Peaks.

www.durangogov.org chapmanhill
Chapman Hill crews plan to start snowmaking in early December, and the hill will likely open later in the month.

www.durangoweatherguy.com
Jeff Givens, the local amateur weather man, breaks down the graphs, charts and other meteorological magic in an effort to give residents the likely local forecast. He’s also got a Facebook page called Durango Snow Lovers.

www.onthesnow.com
This group also compiles snow reports, but they cover the country and have a free app you can download and customize. Search for “On the Snow.”