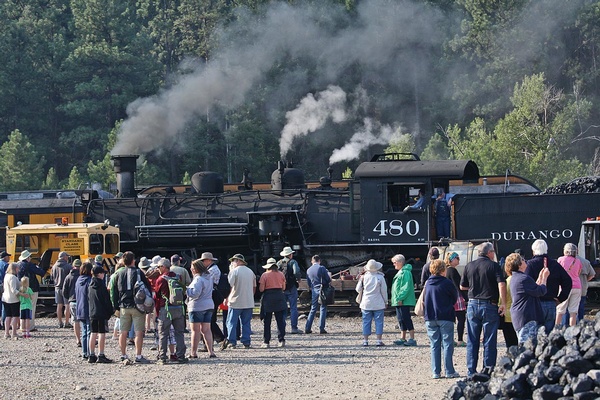 Riders get ready to board the Durango & Silverton Narrow Gauge Railroad at the Rockwood station on Wednesday morning. Recent mudslides from the 416 Fire damaged the train tracks to the south, forcing DSNGR to bus customers to Rockwood in order to ride the train Silverton./Photo by Stephen Eginoire

The 416 Fire didn’t just burn forest in Hermosa Creek, it also ignited tensions in the community.

The entire region took a brutal hit, right at the peak of tourist season. Initial estimates are that the Durango community lost $30 million this June in revenue due to the 416 Fire, and some wonder if Silverton will ever recover.

The official cause of it all is still “unknown,” leaving locals to find their own answers. And, many blame the train for starting the fire.

Some residents have even shouted “Down with the train!” But the truth is the Durango & Silverton Narrow Gauge Railroad is key to Durango’s and Silverton’s economies, bringing in an estimated $200 million annually to the Southwest.

“The train is really valuable to us ... but we’ve got to do it in a different way,” Rachel Landis, who’s helping to coordinate a new citizen group called Save the City, Green the Train, said.

While many understand the financial impact the train has, they are still wanting to move away from coal-powered locomotives. Discussions over dinner on the topic and email chains between friends slowly started to morph into a group of concerned citizens who wondered if change was possible.

“I think it was in response to the fire and how much emotion our community had around that,” Landis said of the group’s origin.

Members of Save the City, Green the Train have only had a couple informal meetings, and the group is still finding its legs. During their most recent meeting, they looked to solidify some concrete goals before requesting time with Al Harper, owner of the Durango & Silverton Narrow Gauge Railroad.

“If they want to come in and really look for ideas,” Harper said, “I’m happy to talk to them.”

Landis, who’s also the director of The Good Food Collective and a board member for La Plata Electric Association, said she understands both sides of the issue.

She’s ridden the train with children and watched them light up from the experience. She knows how the train connects many of its riders with the mountains and the environment in the Southwest.

But, she also rides her bike by the train yard – and right through the plumes of coal-filled smoke.

“Our position is supporting the train, but doing it in a way that mitigates fire hazard,” she explained.

Since the Green the Train group first met in early July, Harper has taken steps toward addressing fire mitigation. He plans to spend about $6 million to purchase three new trains – two diesel and one that runs on oil – and a new building to house them.

The new diesel trains will have the capability to make the long climb to Silverton, something Harper’s existing diesel can’t do. He’s purchased them from a company in South Carolina, and hopes to have them on the tracks before next year’s busy tourist season. The oil train will be built by retrofitting an existing train in the railyard, and it’s expected to be finished by May.

“I’ll probably do two more if the oil-burner works,” Harper said. “We don’t know (how it will go), it’s not been done before.”

All three of the new additions to Harper’s fleet will be able to run when the area is suffering from extreme drought conditions, like the ones the Southwest was experiencing when the 416 Fire ignited on June 1.

“I’ll use the coal when we’re not having high fire risk,” he added.

Harper said he’s looking at every alternative to meet the changing times, but it’s going to take time and money – a lot of money.

“The truth of the matter is there are no quick funds,” he explained. “I used my family’s credit and borrowed $5 million bucks.”

Those loans will be used to add the three new trains for next summer, but purchasing or retrofitting more trains will take even more funding.

If Harper and the Save the City, Green the Train citizen group decide to work together, it wouldn’t be a first. He worked with locals back in 2010 to improve the train’s coal emissions with a group called the Train Smoke Mitigation Task Force.

The coal-fired train engines need to keep warm overnight so they’re ready to go in the morning, but the soot and ash from the smoldering coal would linger over nearby neighborhoods. In an effort to address the issue, the task force was created with help from the City of Durango and Region 9 Economic Development District.

Made up of residents on the city’s south side, train representatives and others, they looked at ways to reduce the soot, ash and lingering smoke.

As a result, trains were fitted with filtration systems and wood pellets were added to the smoldering coals to reduce emissions by about 60 percent, according to Harper.

He said the task force worked together and it went very well – maybe it could happen again.

“I encourage (the Green the Train group) to come talk to me,” Harper said. “I always have my door open.” 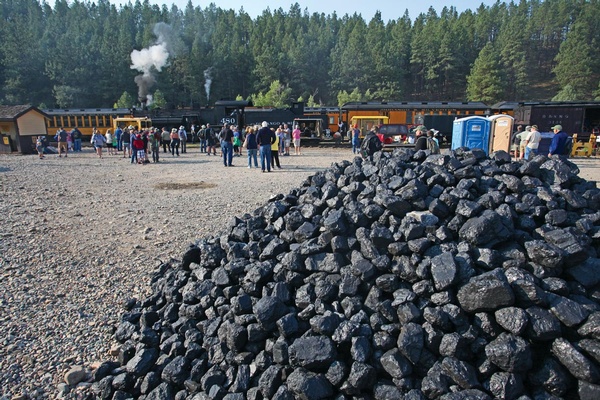 To get involved with the Save the City, Green the Train group, contact Rachel Landis at rachel.l.landis@gmail.com.

If you notice an usual smoke problem, the train has a way to report it. Call the train’s dispatch at 247-2733.

Coal not the main draw for most train riders

Do you need steam and smoke to make a trip on a narrow-gauge railroad authentic?

That’s the question posed after the Durango and Silverton Narrow Gauge Railroad announced the purchase of two diesel locomotives last week. It also plans to retrofit a third coal-engine to burn oil. The plan is to run the trains during times of high fire hazard.

Al Harper, the owner of the railroad, told the Durango Telegraph, that the new locomotives, which do not spew embers, were what needed to be done. “We want to be good neighbors,” he said.

One railroad enthusiast in Chicago, told of the change by Mountain Town News, expressed disappointment. He said the authenticity of the steam-powered locomotive was responsible for at least a quarter of the trip’s value.

found that for a majority of customers said the scenery is what draws them, not the historical accuracy of the locomotives. For 90 percent of customers, the steam-powered locomotives are not central to their interest.

For fans of historical accuracy, they will be advised to plan trips when fire danger is low.

The train is an important part of the tourism draw for both Durango and Silverton. Robbins said the estimated annual impact is $190 to $200 million for the two towns. Robbins estimates the cost of interruption, due to the fire, at $30 million for June alone.

But switching to diesel or oil-powered trains, even if just during periods of high wildfire risk, will require different marketing, says Robbins. Marketing materials in the past have emphasized the coal-fired steam locomotives. That will be replaced by an emphasis on other aspects of the train-riding experience.

Colorado has three tourist trains that burn coal. The Georgetown Railroad west of Denver winds from Georgetown to Silver Plume. Another tourist train, the Cumbres & Toltec, crosses Cumbres Pass at 10,015 feet in the San Juan Mountains between Antonito and Chama daily during summer.

The Cumbres & Toltec has never caused a major fire in its 47 years of operations. However, as is common with steam railroads, small fires have occasionally occurred, reports the railroad operator in a position paper. But these have been swiftly extinguished. Each departing train is followed by two fire-patrol motor cars that carry a water tank and fire pump.