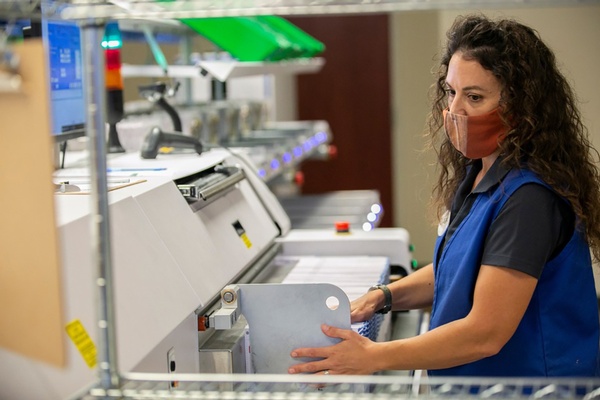 Danielle Piscatelli works a ballot-sorting machine at Denver Elections Division headquarters on primary night, June 30, 2020. The state expanded its ballot tracking capabilities to all voters, who will receive text and email alerts on the status of their ballot in the upcoming election. The software, which was developed by a Denver firm, will also remind voters to turn in their ballots. /Photo by Hart Van Denburg

Previously, only about a quarter of the state’s counties offered automatic ballot tracking. Instead, voters in most counties had to log onto a state website to check on their ballot.

The expansion of the BallotTrax system makes Colorado one of five states with a statewide notification program, according to the National Vote At Home Institute. Colorado Secretary of State Jena Griswold announced the new statewide program last week.

“Being able to track our ballot is something that’s really important for voters, to give them confidence and security,” Pam Anderson, executive director of the Colorado County Clerks Association, said. “I think it gives voters a great deal of control and information about the process.”

The state plans to send texts and emails to people who have been automatically added to the system. Voters can ensure they’re enrolled at colorado.ballottrax.net – or they can opt out.

The system will notify people when their ballot has been mailed, when it arrives at the county clerk’s office and when it has been processed. Some counties will offer additional information through Intelligent Mail Barcodes, which allows them to track ballots within the U.S. Postal Service system.

Denver launched the state’s first ballot notification system in 2009. Since then, 12 other counties have adopted similar systems. Those 12 counties are already using the software that will now be expanded statewide, while Denver is staying on its own Ballot Trace system.

Real-time ballot tracking could boost people’s confidence in mail ballots while they're under scrutiny. President Donald Trump has attacked mail ballots as insecure, though elections experts say that hasn’t been true in mail-voting states like Colorado, while Democrats have said that mail slowdowns could affect ballot delivery.

In Denver, the ballot tracking system may even have boosted voter turnout, according to Amber McReynolds, the county’s former elections director and CEO of the National Vote at Home Institute.

People who used ballot tracking tended to vote at slightly higher rates, she said. That may be because Denver used its system to send out reminders to voters who hadn’t yet turned in their ballot.

“It becomes this whole communication engine that is really good for voters,” McReynolds said.

The settlement allows Colorado election officials to review any USPS materials related to voting, including TV, radio and online outreach. If the state determines the materials could confuse Coloradans, it has the right to temporarily block their release and request a court review.

The agreement comes after the state sued in response to election mailers that the Postal Service recently delivered nationwide. Colorado officials called them inaccurate and misleading.

Earlier this week, Griswold said she would ask the Postal Service to pay for a new election mailer that outlines the state's specific guidelines. Instead, she dropped that request in favor of the ability to review materials before they're sent out nationwide.

“I am pleased with the settlement we reached with the U.S. Postal Service,” Griswold said in a press release. “Voters deserve accurate election information. The terms of the settlement mandate that all reasonable effort be taken to remove all undelivered misleading mailers from the mail stream, and it requires collaboration between the Colorado Department of State and the USPS to make sure all future Postal Service communication includes correct information.”

The Postal Service also agreed to collect and destroy the mass-produced election mailers that have yet to be distributed in Colorado. Gregory Graves, a vice president of operations for USPS, said 75 percent of the mailers were already delivered to households in the state.

“The first is that they urge Coloradans to request a mail ballot or an absentee ballot 15 days before election,” Griswold recently told Colorado Matters. “You don't have to do that in Colorado. You just have to register to vote and you're sent a mail ballot. The second piece of misinformation had to do with when Coloradans had to return the ballot through the mail. The USPS suggested seven days before Election Day, and the state of Colorado actually suggests eight days before Election Day.”

This isn’t Colorado’s only court victory over the USPS. Last week, a federal judge allowed the state to grant a nationwide injunction to the Postal Service, that would force it to immediately “halt and reverse its drastic operational  changes.”