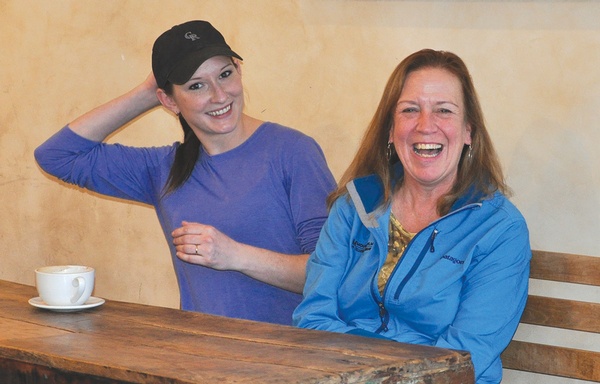 Jessica Sinha, left, Beth Lamberson, right, and Matt Zimmerman, not pictured, have come together to create a gathering place for locals looking for a little kindness./Photo by Tracy Chamberlin

She hoped it would inspire a few acts of kindness over the holidays, but Jessica Sinha never realized how many people – just like her – only wanted to help others.

In early December, Sinha put a post on the Durango Garage Sale Facebook page asking her fellow members to be kind this Christmas and lend a hand to a person in need.

With the holiday season in full swing, she thought maybe someone would help a neighbor carry groceries, change a tire for a stranger or even pitch in so someone less fortunate could have gifts under the tree.

Her post, however, quickly exploded. People responded in droves.

One family reached out because they didn’t have enough heat in their home. Someone else had space heaters to offer for free.

Another family, who’d been baling water out of their clogged bathtub for some time, told their story and asked if anyone had better tools they could borrow to unclog the drain. Instead, someone offered to hire a local plumber to help, and the plumber ended up donating his time.

A different couple needed a new doorknob, but the husband was blind and his wife couldn’t install it. Someone ended up donating the doorknob and installing it for them – without asking for anything in return.

In turn, that couple was able to pay forward the kindness by offering an old lamp, which someone else was able to use.

And, that’s what it was all about.

Each time someone received a helping hand, they’d offer one to the next person,
and so on.

“Even the people who are posting a need are compelled to pay it forward,” Sinha said. “Somebody doesn’t have to have money to help someone else.”

At the same time Sinha’s post was taking off, Beth Lamberson, who works as the senior director of donor and community engagement for the Powerhouse Science Center, was sitting at home. It had been five years since two of her family members had taken their own lives, one around Thanksgiving and the other just before Christmas.

It was an especially difficult time for Lamberson, and she admitted she was struggling to find her way out. Then, she came across Sinha’s post.

After reading the message and knowing there were people out there that she could help, it gave her a way to start moving forward again. Instead of focusing on herself, she focused on others – which was exactly what she needed.

As Lamberson began to sift through the comments, she realized that Sinha’s post had taken on a life of its own. The back-and-forth of helping hands was getting buried by comment after comment, response after response.

It was clear this community of do-gooders needed a space to call their own – and the BeKINDurango group was born.

The Facebook page went live Dec. 14. It’s taken less than a month to amass more than 1,500 members and countless postings. “I never expected it to take off as it did,” Sinha said. But, she’s pleased that it has.

Just a few days before Christmas, a local family reached out to Project Merry Christmas. They had a 4-year-old girl and no way to get her any presents. Unfortunately, the nonprofit had just finished

putting together packages for families and was about to make deliveries. There was nothing they could do to help.

The good news, though, was that word had gotten out about BeKINDurango. The nonprofit reached out to Lamberson, and the BeKIND community responded.

Lamberson helped coordinate, and Sinha and her husband collected the gifts, wrapped them and made the delivery the following day.

So many people stepped up, they were able to help out the entire family. They deliv-
ered a small play kitchen, new doll and other toys to the girl, as well as some essentials for a new baby, groceries and a $190 Albertson’s gift card.

When Sinha arrived with her trunk full of presents, the 4- year-old girl hugged her tight and thanked her. She believed Sinha was Santa’s sister.

“The look on this little girl’s face ... she was just amazed,” Sinha said. “It was really the most rewarding experience ever.”

Lamberson said in today’s world people can often feel so divided, but the BeKIND group has been a way to shine the light on the community’s brighter side.

There’s no place on the BeKINDurango  Facebook page for hate, profanity or judgement. It’s not a place to buy or sell anything. It’s only for helping each other out and other random acts of kindness.

Some people give away kids clothes or even crayons. Others are searching for a skateboard or futon for their kids. At times, members will post about needing more than just a new doorknob, like help with housing.

This is where Lamberson’s 35-plus years of nonprofit experience comes in handy. She knows the local programs and is able to point people in the right direction.

All of the efforts from Sinha, Lamberson and Matt Zimmerman – who also helps organize and manage the BeKIND page – are voluntary. No one’s getting paid, and no one’s looking to start another local nonprofit. Lamberson said there’s plenty of those already. It’s just a place where someone can ask for a helping hand, and someone else can offer one.

“If you help one person, they’re going to be inspired to help other people, it just becomes this spider web effect,” Sinha said. “I am amazed by how much our community has already done for one another, and I don’t think we’ve even begun to peak.” 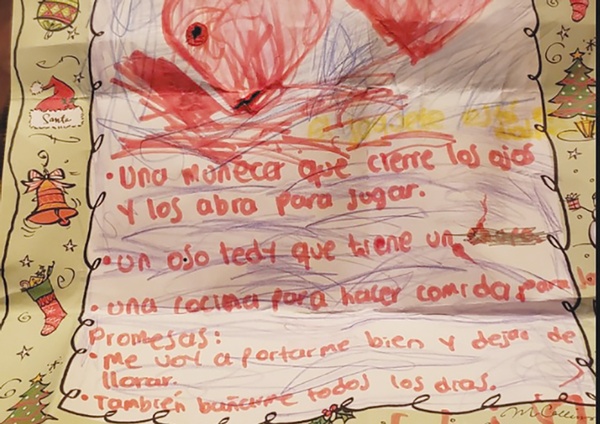 Looking for a little kindness? 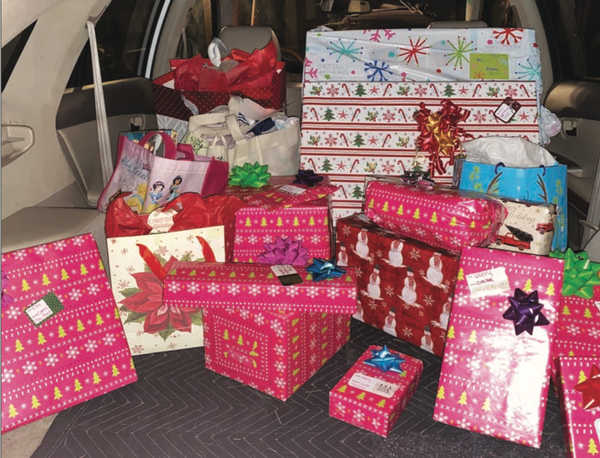 A trunk full of Christmas presents straight from “Santa’s sister” was delivered just a couple days before the Christmas holidays to a young girl who promised to make Santa proud in the coming year./Courtesy photo

Interested in joining the local community of do-gooders and others looking to just be kind? Check out BeKIND’s FB page at Facebook.com/BeKINDurango. But remember, there’s no buying, selling, profanity, judgement, hate or bashing allowed. It’s just a place to ask for help or offer some yourself. Don’t join up if you can’t be kind.