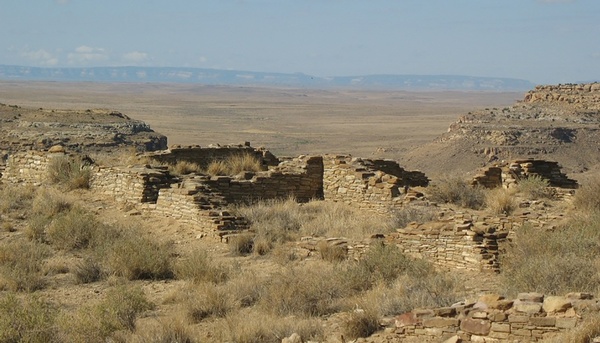 Indigenous leaders have called for stronger protections from oil and gas development around Chaco Culture National Historical Park. Though protections are in place around the park boundaries, conservationists say the imprint of the Ancestral Puebloan society extends for miles across the landscape. / Photo courtesy of National Park Service

THE NEWS: Acoma Pueblo Gov. Brian Vallo and former Interior Secretary Bruce Babbitt recently called on the Biden administration to reform the oil and gas leasing program in such a way that protects cultural resources and elevates tribal expertise. They highlighted a new report by Paul Reed of Archaeology Southwest, which found that over the last 70 years oil and gas development has come to dominate public lands and “has profoundly fragmented cultural landscapes and disrupted the connections tribal communities maintain with these places. Furthermore, the BLM has failed to pursue meaningful tribal consultation and engagement in the oil-gas leasing process.”

THE CONTEXT: On a cloudless, scorching August afternoon four years ago, I followed Reed’s directions to a major Chacoan Great House that sits just inside the proposed buffer zone around Chaco Culture National Historical Park. I should say I tried to follow Reed’s directions, since finding one’s way through the web of gas patch roads can be a confounding task, to say the least. Eventually I gave up on driving to the official access point, parked my car on an oil and gas wellpad, and headed on foot into the sagebrush sea.

It was a lonely journey. After leaving the highway I saw no other cars and certainly no other hikers. And yet the detritus of humanity was scattered everywhere: pumpjacks dancing their slow, metallic grind; appendages of pipelines jutting from soft dirt; giant tanks streaked with rust. A small herd of horses, their manes shiny in the sun, watched me curiously, and bees swarmed the lascivious fuchsia blossoms of a gangly beeweed that stood no less than 4-feet tall.

Somehow, I managed to go the correct direction and soon reached my destination, where the flat, sage-topped mesa gives way to badlands and conical buttes, offering an expansive view of the Chaco River Basin and beyond. It was easy to see why someone had chosen the place to build a complex of structures known as Pierre’s Site. I headed straight for the “Acropolis,” an aptly named flat-topped butte upon which three of the structures in the ancient complex sit. Unlike the buildings in Chaco Canyon, these haven’t been excavated or stabilized, so at first glance they appear to be amorphous piles of rock. But, on closer inspection, the outlines of old walls, kivas and rooms became visible, like the curves of a body under a thick blanket.

Various layers of protection cover Chacoan sites. The park itself is off-limits to all oil and gas development. Pierre’s Site and several other outliers are part of the Chaco Culture Archaeological Protection Sites Program. All sites are on federal land and shielded by the Archaeological Resources Protection Act and Section 106 of the National Historic Preservation Act, which requires oil companies to conduct a cultural inventory of all land in the path of development. If the surveyors happen upon a “significant” site, the well pad or road or pipeline must be relocated – if possible – at least 50 to 100 feet away, a process known as “identify and avoid.” Tribes are supposed to be consulted during the process, as well.

“This approach has protected the physical footprint of many cultural resources over the last 45 years,” Reed writes. “Nevertheless, the focus on individual sites, and not the larger landscapes they are a part of, has led to highly fragmented cultural landscapes across the West.”

Pierre’s provides a perfect example of both the protection and fragmentation. The structures, placed among and in harmony with the surrounding buttes and bluffs, remain unmarred by development. From my Acropolyptic perch, however, I could see at least 10 pumpjacks bobbing up and down, and the whir-pop-pop-whir of the machines and the diesel engines that run them was irritatingly audible. The site is surrounded by industrial equipment.

Pierre’s lies along the Great North Road – the most prominent and visible of several such “roads” in the region – an architectural feature that stretches directly north of Chaco Canyon for 30 miles or more. It may have been a symbolic path through time, connecting old worlds with new, or a reminder of the power Chaco-central wielded over its outliers, or a giant arrow pointing people to a holy place. Reed calls it “a landscape monument on a large scale.” Yet little effort has been made to protect it. Oil field roads and pipelines cross it in dozens of places, and workers have bulldozed well pads right on top of it, erasing the subtle signs that it was ever there. If something so significant can get plowed under, how many more subtle features – shrines, corn fields, plant-gathering sites, ceremonial areas, flint-knapping spots – have been destroyed indelibly?

The limits of Section 106, when faced with a federal land management agency inclined on leasing as much land as is possible, become abundantly clear in the Greater Chaco Region. Clearly the agencies did not consult with the relevant tribes or incorporate their expertise into the leasing decisions, either, despite the cultural significance of the area.

The industrialization of the Chacoan landscape is not the product of Trumpian energy dominance, by any means – nearly all of the 40,000 wells in the San Juan Basin were drilled years before Donald Trump’s election. Nor has the rate of development hastened or slowed according to who sat in the Oval Office. The entirety of the most recent boom in the region, a fracking frenzy targeting oil in the Mancos Shale near Chaco, took place under President Barack Obama. And the Biden administration, while pausing new leases, has issued new drilling permits on existing leases in the San Juan Basin, where about 90 percent of public lands are already under industry control.

The entire system clearly needs to be rebuilt to go beyond the current hodgepodge method of trying to protect a limited number of sites while sacrificing everything else. The leasing program, Reed writes, must be overhauled to embrace a holistic landscape approach. This would include:

• Involve Indigenous communities from the beginning of the process, ideally during the creation of the Resource Management Plans that guide leasing and permitting, keep them involved through the leasing, permitting and development stages, and actually hear what they say and integrate it into the decision-making process;

• Prohibit development of leases until all tribal concerns are identified and addressed;

• Hold field visits for tribal leaders of proposed development areas prior to permitting;

• Make oil and gas leaseholders responsible for a cultural inventory of the entire lease, not just the areas that are being developed.

The Interior Department reportedly has completed its review of the oil and gas leasing program but has not yet released the results. Perhaps when the infrastructure bill is finalized, the Biden administration will move forward on the reforms, perhaps including these recommendations.

I stayed at Pierre’s Site for a couple of hours, walking gingerly around the structures, gazing out at the view from up high, thinking about all of the life that had passed through this spot, listening to the sound of the breeze in the shrubs and trees. Then I slowly waded back into the sea of sage.

The Land Desk is a thrice-weekly newsletter from Jonathan P. Thompson, longtime journalist and author of River of Lost Souls, Behind the Slickrock Curtain, and the newly released Sagebrush Empire. To subscribe, go to: www.landdesk.org.?