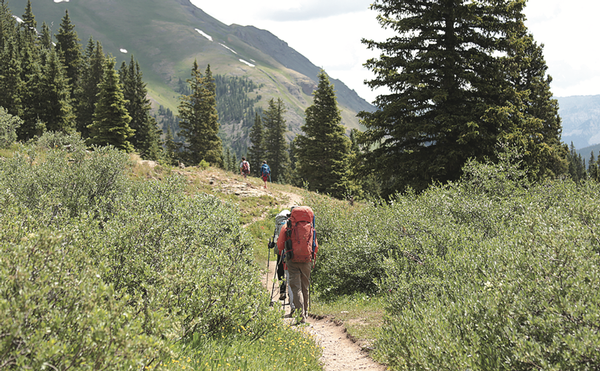 Inspired by national and statewide surveys from the Outdoor Industry Association, Trails 2000 began work on a Trail Impact Study to determine just how much use local trails get and how they shape the economy./Photo by Jennaye Derge

What adds $28 billion to the Colorado economy and supports 229,000 jobs? Playing outside. In a recent study from the Outdoor Industry Association, or OIA, researchers learned the Centennial State earns $2 billion in tax revenue and $9.7 billion in wages and salaries from outdoor recreation annually.

Nationally, the industry supports 7.6 million jobs and is responsible for $887 billion in consumer spending, which is about 3 percent of the country’s GDP, or Gross Domestic Product.

Since more than a third of La Plata County is public land, supporting hundreds of miles of trails, and countless camping and river-running opportunities, it’s likely the Southwest part of the state contributes its fair share to those totals. But, just how much is a mystery.

It’s a mystery one local nonprofit is trying to solve. Inspired by the OIA’s national and statewide surveys,

Trails 2000 began work this month on a Trail Impact Study across La Plata County to determine just how much use local trails get and how they shape the economy.

Mary Monroe Brown, executive director for Trails 2000, said the plan is to peel the OIA study down another layer and take a look at the impact outdoor recreation has locally on jobs, consumer spending and tax revenues.

“We want to mirror it on a regional level,” she added.

When the numbers came out from the OIA, even Brown was a little surprised. “It’s approximately 3 percent of the GDP,” she added. “And, it takes into account all types of outdoor recreation users.”

The study, which came out in 2017, looked at 10 different broad activities like camping, fishing, hunting, snow sports, water sports, trail sports and off-roading. Within these broad categories, they broke it down even further. For example, trail sports included day hiking, backpacking, rock and ice climbing, running, horseback riding and mountaineering.

According to the OIA, this latest study is the largest and most comprehensive report of its kind.

The same can be said for what Trails 2000 is trying to accomplish. The nonprofit has never done a study like this before.

Molas Pass, and portions of the Colorado and Hermosa trails. When users come by, volunteers ask trail users for names and age, and also note day of the week, time of day, what each person is using the trail for and their zip code. If it’s an out-of-town zip code, the volunteers will also ask how many days they’re visiting. Data collection started a few weeks ago and will continue into the fall.

Brown said this kind of information is common to collect and useful in many ways – some of which they haven’t even discovered yet.

“There’s definitely a growth in trail usage, so this will be good information,” she added.

According to Brown, the trail impact study performed this year will be the first step to finding out just how much of an impact trail systems have on the area. The second step will be a broader, follow-up study next year, taking time in the off season to organize and analyze the information.

Explaining the usefulness of a trail system – not just economically, but the benefit to the health and well-being of a community – isn’t easy, according to Brown.

After all, trails aren’t just for enjoying outdoor recreation, they serve as portals to other outdoor activities.

When someone goes outside, no matter what the destination or activity, they are more than likely going to use a trail, Brown said. People take trails to get to the river, to the wilderness, to the beach. They use them to hike, bike or go horseback riding.

Breaking down trail use into statistical terms often helps people understand how they impact a community and its visitors.

“It is apparent in Durango that people use and love our trails,” Brown said in a press release. “The results (of this impact study) will help demonstrate the benefits of outdoor recreation on the health and well-being of locals and

tourists, as well as the impact on our local and state tourism economies.”

Brown said often times, people are talking about how Americans aren’t healthy and aren’t getting outside. But that’s just not the case.

The OIA study found people in the U.S. actually spend more money on gear for trail sports, like hiking and climbing, than they do on home entertainment, $20 billion and $18 billion respectively. In addition, more people enjoy outdoor recreation than attend professional sports games.

The number of people who showed up to watch NFL, NBA, MLB and NHL games – combined – is about 134 mil-

lion per year. The number of people who headed outside to have fun is 145 million.

“When you look at these numbers, people are getting outside,” Brown said. “The next step is to encourage stewardship of these lands.”

When Trails 2000 said it needed volunteers for its Trail Impact Study, the response was overwhelming, according to Mary Monroe Brown, executive director for Trails 2000. The group has had enough interest to fill all volunteer spots through July, but more volunteers will be needed for August and into the fall. Look for those schedules in coming weeks at www.trails2000.org.

Where: Camping weekend to work on Trails 2000’s 19.1-mile adopted section of the Colorado Trail, from Champion Venture to Junction Creek.